Tax revenues in Latin America and the Caribbean (LAC) fell by 8.0 percent on average in nominal terms and by 0.8 percent as a share of GDP in 2020 because of the COVID-19 pandemic, according to a new report released today. However, the region’s economic recovery and a rebound in commodity prices supported a recovery in tax revenues in 2021.

Revenue Statistics in Latin America and the Caribbean 2022, released during the 56th General Assembly of the Inter-American Center of Tax Administrations (CIAT), shows that the decline in tax revenues in LAC in 2020 exceeded the region’s economic contraction in nominal terms. Tax-to-GDP ratios fell in 20 of the 26 LAC countries covered by the report and LAC’s average tax-to-GDP ratio fell by 0.8 percentage points (p.p.) to 21.9 percent. Tax-to-GDP ratios in the LAC region ranged from 12.4percent in Guatemala to 37.5 percent in Cuba in 2020. 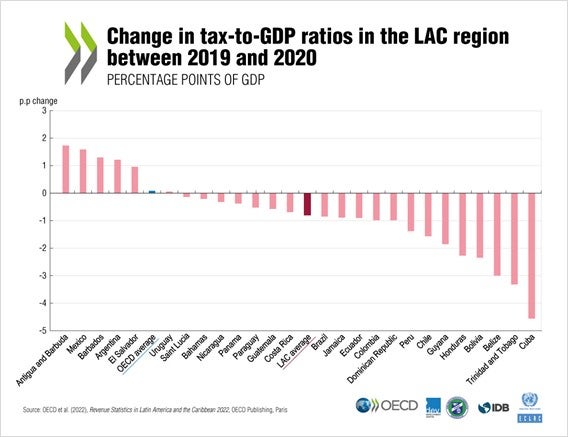 Revenues from all main tax categories declined in nominal terms between 2019 and 2020 on average across the LAC region. Taxes on goods and services, which accounted for about half of total tax revenues in LAC, were the worst affected, decreasing by 0.7 percent of GDP on average. Revenues from corporate income tax (CIT) declined by 0.2 percent of GDP while revenues from personal income tax (PIT) and social security contributions (SSCs) remained relatively stable as a percentage of GDP.

The impact of the pandemic on tax revenues differed between LAC and the OECD. As a percentage of GDP, taxes on goods and services remained unchanged in the OECD, while CIT revenues declined by twice as much as those in the LAC region and PIT and SSCs both increased. Relative to the OECD, PIT and SSCs accounted for a small share of total tax revenues in the LAC region (28.2 percent in LAC in 2020 versus 49.4 percent in the OECD in 2019).

Revenue Statistics in Latin America and the Caribbean 2022 is a joint publication by CIAT, the United Nations Economic Commission for Latin America and the Caribbean (ECLAC), the Inter-American Development Bank (IDB), the Organisation for Economic Co-operation and Development (OECD) Centre for Tax Policy and Administration and the OECD Development Centre. A launch event for the 2022 edition of the report will take place during ECLAC’s XXXIV Regional Fiscal Policy Seminar.

To access the report, data, overview, country notes and infographics go to http://oe.cd/revstatslac

The Inter-American Development Bank is devoted to improving lives. Established in 1959, the IDB is a leading source of long-term financing for economic, social, and institutional development in Latin America and the Caribbean. The IDB also conducts cutting-edge research and provides policy advice, technical assistance, and training to public and private sector clients throughout the region.

Publication
Revenue Statistics in Latin America and the Caribbean 2022