Slowdown in Exports from Latin America and the Caribbean Consolidates

The value of goods exported from Latin America and the Caribbean increased at an estimated rate of 18.8% in 2022. The downward trend in the region's external sales consolidated during this period, after growing 27.8% in 2021, according to a report by the Inter-American Development Bank.

In the coming months, the export growth rate is expected to slow in response to the downward trend in commodity prices, the war in Ukraine, restrictive monetary policies to reduce inflation and the slowdown in global growth, the latest edition of Trade Trends Estimates: Latin America and the Caribbean has found.

“After a rapid recovery in 2021, a series of global shocks have sent exports from Latin America and the Caribbean into a slowdown that will continue into 2023. Reversing this trend will be key to shoring up economic growth in the region,” said Paolo Giordano, Principal Economist at the IDB’s Integration and Trade Sector, who coordinated the publication.

According to the report, the shock caused by the Russian invasion of Ukraine “further increased the prices of LAC’s main export commodities.” However, “in most countries, the uptrend changed direction in the middle of the year in response to slowing global demand, forecasts of low growth, and the appreciation of the US dollar.”

Performance by Subregion
Exports are estimated to have grown by 18.2% in South America in 2022 after increasing by 36% in 2021. The upturn in commodity prices explained much of this performance, which benefited from the dynamism of intraregional trade and was particularly hard hit by the cooling of demand from China.

Exports from Mesoamerica increased by an estimated 18.8% year-on-year in 2022 after growing by 19.4% in 2021. Unlike the rest of the region, Mexico experienced a continuous increase in its export growth rate throughout the year due to the rise in volumes shipped to the United States. Although exports from Central America slowed significantly in 2022 in comparison with 2021 (26.6%), they nonetheless grew by 13.6%, boosted by demand from within the region and the United States.

Exports from the Caribbean rose by an estimated 38% in 2022 after growing by 44.4% in 2021. The United States accounted for most of the increase, followed by the European Union. 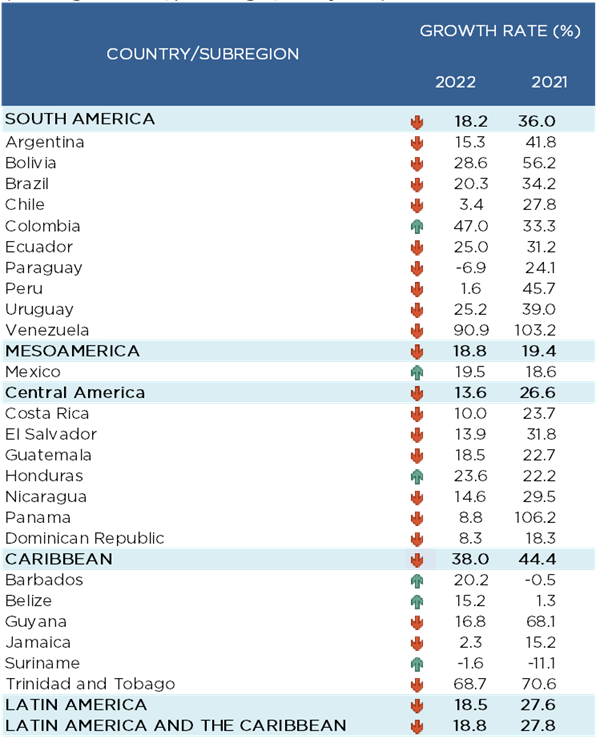 The report was prepared by the IDB’s Integration and Trade Sector and its Institute for the Integration of Latin America and the Caribbean (INTAL).

About the IDB
The Inter-American Development Bank’s mission is to improve lives. Founded in 1959, the IDB is one of the leading sources of financing for economic, social, and institutional development in Latin America and the Caribbean. The IDB also undertakes cutting-edge research projects and provides consultancy services on policies, technical assistance, and training to public and private clients throughout the region. Take our virtual tour.

Integration and Trade and the IDB