Increasing trust is key to a more dynamic business sector and economic reforms needed for a stronger post-COVID recovery in Latin America and the Caribbean, according to a new flagship report by the Inter-American Development Bank.

Drawing from ground-breaking new analysis and data, as well as an extensive review of literature, the report, Trust: The Key to Social Cohesion and Growth in Latin America and the Caribbean, shows that mistrust is an acute problem that limits socioeconomic development in Latin America and the Caribbean and the ability to take on difficult issues, such as climate change.

Nine out of ten people in the region do not believe others can be trusted. Levels of trust in the region are one-fourth that of developed nations in the Organization of Economic Cooperation and Development (OECD).

The flagship report studies the root causes of mistrust in the region and offers recommendations for policymakers on how to turn this challenge into an opportunity to help address some of the region’s most pressing development issues, such as low productivity and innovation, lagging investment, and high levels of informality and tax evasion.

“Building trust through greater transparency and stronger institutions should be at the center of the policy agenda in Latin America and the Caribbean. Placing trust at the center of government decision making will measurably advance development in the region,” said IDB President Mauricio Claver-Carone.

“Greater trust means less red tape that burdens businesses and hurts investment and innovation. It means more transparent governments that are committed to deliver on their promise and be accountable for it. And finally, it is also about engaged citizens who will voice their opinion and participate to strengthen democracies and support more inclusive societies.”

TRUST LEVELS IN LATIN AMERICAN AND CARIBBEAN COUNTRIES ARE LOW 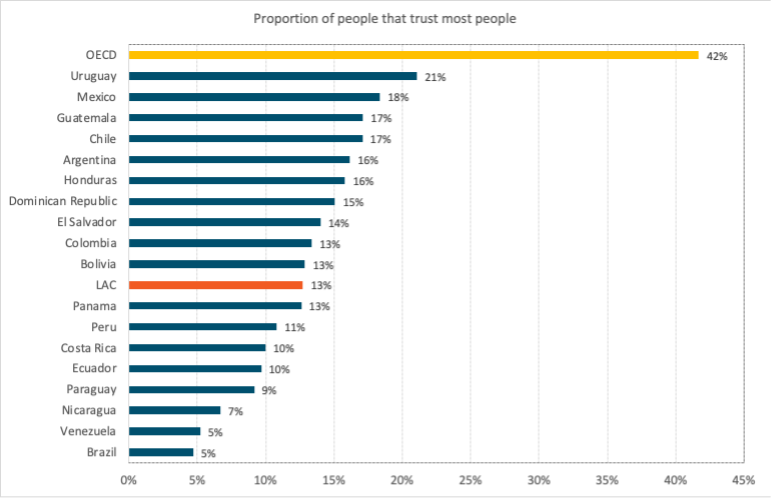 The IDB has been working closely with member countries to strengthen institutions, support the rule of law and promote greater transparency and integrity in its Vision 2025 development plan. Higher trust could be a boon for achieving tighter regional integration, strengthened supply chains, more productive small and medium-sized businesses, and greater digitization, which are among the priority areas the IDB has identified as opportunities to accelerate the region´s recovery in the post-pandemic period.

Less trust is associated with

More trust is associated with

“This study provides a path for reforms that are pro-market, while building greater social cohesion,” said IDB Chief Economist Eric Parrado. “It also offers a way for governments to harness the support they need to tackle not just the pandemic recovery, but structural issues like lagging productivity and big challenges like climate change, diversity and inclusion.”

“Trust is too often taken for granted in the current economic policy debate because the roots of this problem are often considered to be structural in nature," said Susana Cordeiro Guerra, manager of the IDB’s Institutions for Development Sector. “However, governments have powerful tools available to them to turn this around.  Strengthening public sector institutions, eliminating the arbitrary enforcement of regulations, and making more information available will empower citizens and firms to deter and detect untrustworthy behavior and increase their confidence and trust in the system."

The study recommends that governments in the region — when designing public policies — create incentives for public officials, economic agents, and citizens to act in a trustworthy manner.

Governments must reduce differences in the access of information by investing in high-quality regulatory bodies and educating and making more information available to citizens to empower them to detect and deter untrustworthy behavior. Governments must also reduce power asymmetries by increasing accountability and strengthening third-party enforcement institutions so citizens and firms feel they can rely on these institutions when mistreated by governments, firms, or other citizens.

Building trust in the private sector

Lack of trust reduces the competitiveness of the private sector. According to a survey of 3,000 registered firms on the IDB’s ConnectAmericas platform, managers whose firms faced more competition professed significantly greater interpersonal trust than those who admitted less competition. Meanwhile, high trust countries are more productive and are more likely to participate more in global supply chains. Latin American and Caribbean participation in global supply chains lags far behind that of most other regions.

Evidence from the survey shows that during the pandemic, high trust firms extended more benefits to their workers. Low-trust companies are more likely to demand payment up front and, in countries where trust is lower, more firms are likely to be excluded from access to bank credit.

To improve the investment climate and innovation, the study recommends that governments strengthen credit agencies, legal institutions, and regulatory agencies to level the playing field among companies and increase transparency and integrity. To reduce power asymmetries, the study recommends removing barriers to entry, fostering greater competition, and facilitating access to the legal system.

Mistrust also hurts the public sector. Researchers surveyed 2,500 government officials in the region and found that those who expressed higher trust reported greater information sharing and collaboration with their colleagues, leading to more agile and responsive public sectors. They also expressed greater support for digital reforms.  In contrast, across countries, low trust is associated with a lower offering of digital government services, worse regulatory quality, and higher levels of tax evasion.

In low trust countries citizens are more reluctant to come together to vote for better policies. They are less likely to hold governments accountable for failure to deliver on their promises and for rent seeking. New evidence reveals that mistrust distorts the policies that citizens demand from their governments, preferring more cash transfers at the expense of governments providing public goods, such as security and education, that could more improve their welfare.

To improve access to information, the study recommends that governments increase budget, spending and regulatory transparency and improve communications to citizens about promises and results by reforming the agencies that track the execution and results of government initiatives.

Education is the foundation of trust. The study points out that more educated individuals can better distinguish whether they are the victims of bad luck or opportunistic behavior by others, including by companies or government.

In addition, the report finds that:

The Inter-American Development Bank is devoted to improving lives. Established in 1959, the IDB is a leading source of long-term financing for economic, social and institutional development in Latin America and the Caribbean. The IDB also conducts cutting-edge research and provides policy advice, technical assistance, and training to public and private sector clients throughout the region. Access our virtual tour. 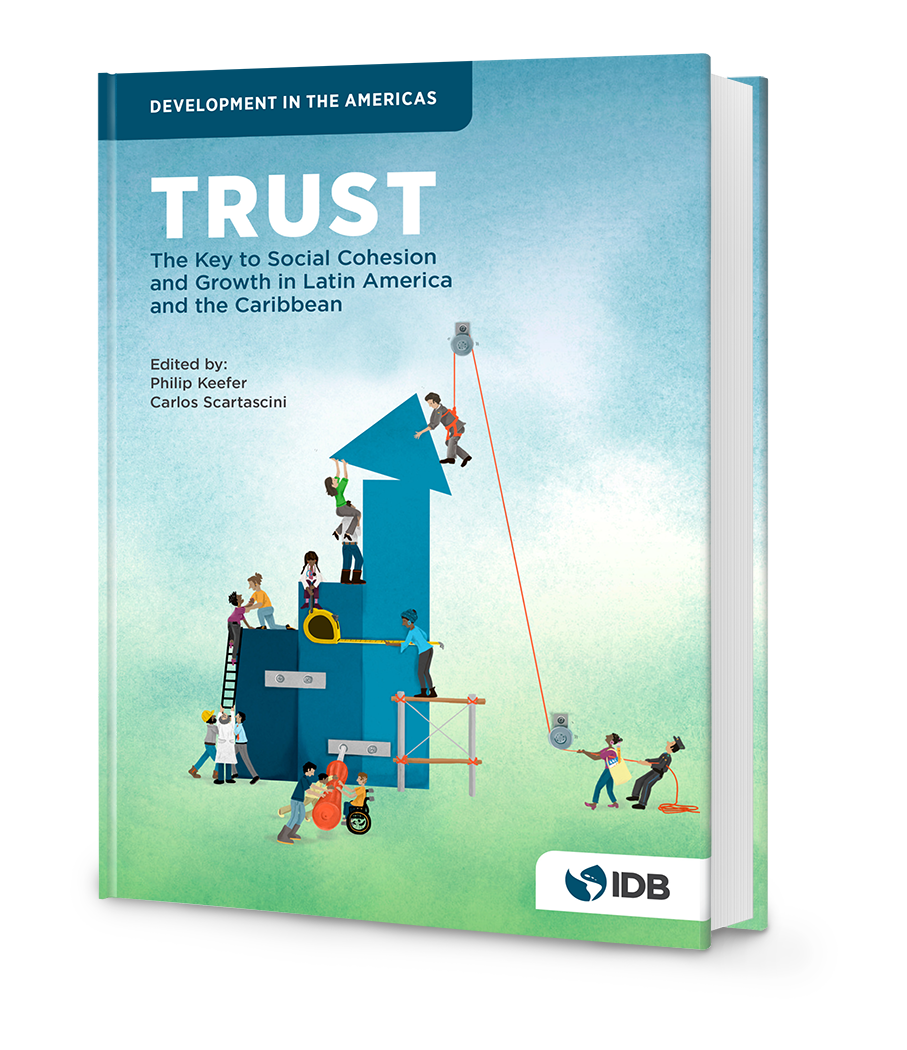 Download the report on trust in Latin America and the Caribbean