The value of exports from Latin America and the Caribbean will decrease by 2.4 percent in 2019 after two years of robust growth, according to a new report by the Inter-American Development Bank that analyzes the trade performance of 25 countries in the region.

The study forecasts that the downturn in exports will continue in the coming months due to slowing global demand, volatility in commodity markets, and uncertainty around global trade tensions.

After growing 8.7 percent in 2018 and 12.2 percent in 2017, the region is set to enter a trade contraction phase for the third time in a decade. The downturn in the value of exports from Latin America and the Caribbean was in line with the trend in global trade, which fell 3.1 percent year-on-year in the first three quarters of 2019.

The contraction was mainly driven by lower export prices and stagnating trade volumes, according to the latest edition of Trade Trends Estimates for Latin America and the Caribbean.

“While advanced economies are beginning to display a cautious return of optimism, emerging economies continue to pose risks to exports from Latin America and the Caribbean,” said Paolo Giordano, Principal Economist at the IDB’s Integration and Trade Sector. Giordano coordinated the study.

The weakening of exports was caused by a contraction in purchases by the European Union (-7.0 percent), the region itself (-10.8 percent), and particularly those of China (-2.3 percent), which had grown close to 25 percent in 2018. Exports increased 1.0 percent to the United States, the only trading partner driving the expansion of sales from the region, although the pace of growth was much slower than in 2018.

Iron ore was the only major export commodity whose price rose in 2019 (increasing 38.4 percent between January and October), due to exceptional events that affected supply, namely the disruption of production in Brazil and extreme weather events in Australia.

The oil price trend, which had driven the recovery in exports from the region between 2017 and 2018, reversed course and fell 12.9 percent in the first 10 months of 2019 in comparison with the same period in 2018.

South American exports declined at an estimated rate of 7.2 percent after growing 8.2 percent in 2018. The Caribbean experienced an estimated contraction of 10.8 percent.

Exports from Mesoamerica grew 3.1 percent as a result of a 3.3 percent increase in shipments from Mexico and a 1.5 percent rise in those from Central America. While foreign sales from these countries remained on positive ground, they grew at significantly lower rates than in the previous year.

Imports of the region fell at an estimated rate of 3.1 percent, due to both the contraction in economic activity in several countries of Latin America and the Caribbean and the side effects of the decline in export demand. 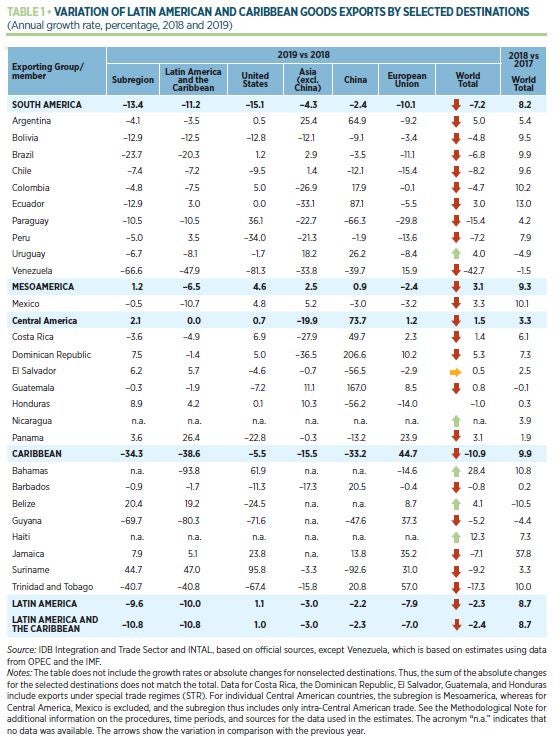 Trade and integration sector at the IDB