Latin America and the Caribbean could add an additional $11 billion in annual trade flows by blending 33 separate agreements into a single regional free trade bloc, according to a study by the Inter-American Development Bank (IDB).

Connecting the Dots: A Road Map for a Better Integration of Latin America and the Caribbean charts a course for the region to attain the elusive goal of regional integration, noting that Argentina, Mexico and Brazil would be the key players in any meaningful integration effort.

Trade in the region is a complicated patchwork of preferential trade agreements (PTAs), anchored by its two main blocs, the Pacific Alliance and MERCOSUR. The study notes that while these agreements have increased intraregional trade by 64 percent on average since their inception, these gains fell well short of what a $5 trillion market could offer. More worryingly, they have proved inadequate at making the region more competitive internationally.

The report offers a roadmap toward maximizing these gains by promoting a path of convergence among the existing PTAs which would eventually lead to a Latin American and Caribbean Free Trade Agreement (LAC-FTA).

“Convergence is the way to strengthen the economic relevance of the preferential trade agreements in our region,” said Antoni Estevadeordal, manager of the IDB’s Trade and Integration Sector. “Together, they could help improve the region’s competitiveness abroad, particularly in this increasingly challenging trade environment. Alone, and without a critical mass, these agreements face irrelevancy or even a slow death in the face of major deals already in place in Europe, Asia and North America.”

The report looks at the trade impacts of a LAC-FTA under various international scenarios. In the prevailing environment, the agreement would produce average gains of 9 percent for intraregional trade in intermediate goods used in exports from Latin America and the Caribbean, which would bolster the region’s underdeveloped value chains.

Driven mostly by tariff elimination, a LAC-FTA would also increase intraregional trade in all goods by an average 3.5 percent or an additional $11.3 billion, based on 2017 flows. The boost to specific exports would range from 1 percent in mining in the Andean countries to 8 percent in manufacturing in Mexico and 21 percent in agriculture in Central America.

In a scenario of increasing trade fictions, the report argues that a regionwide agreement could prove to be an effective insurance policy against market losses. “A free trade agreement of this sort could mitigate the negative impacts of global trade frictions on LAC exports by as much as 40 percent,” added Estevadeordal. 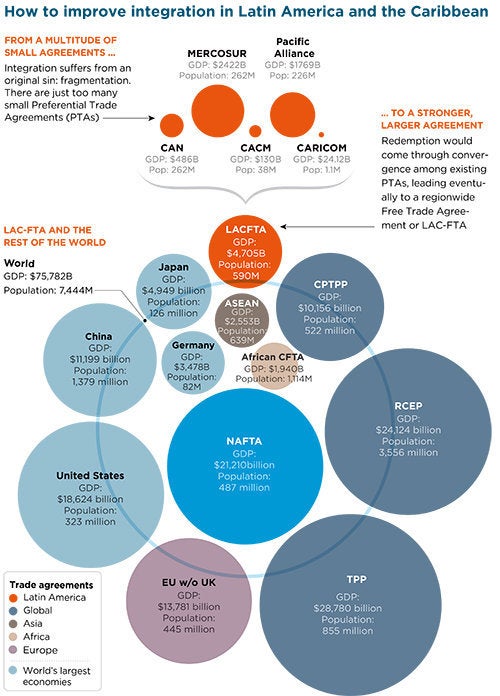 The report acknowledges that this type of strategy is likely to be met with skepticism, given the difficulties faced by previous attempts to reach a single, regional free trade deal. It argues, however, that nearly 90 percent of intraregional trade is already duty-free, thus providing a solid platform for building a regional free trade area. Moreover, the region has never been closer to political consensus around the benefits of trade and integration.

Drawing on the lessons of more than a quarter of a century of integration initiatives, the report recommends first creating a free trade zone focused on goods and services, with other issues such as labor, intellectual property and the environment to be added later. It should also include a chapter on trade facilitation, which would include should move beyond mere customs-related measures to include mechanisms that reduce transportation and transaction costs.

According to the report, a critical mass of countries would be required to get the integration process moving. Argentina, Brazil and Mexico are uniquely positioned to bring together the region’s largest subregional blocs, the Pacific Alliance and MERCOSUR, whose combined $4.3-trillion market accounts for 81 percent of the region’s GDP.

Governments could opt for a cautious, step-by-step approach that extends cumulation of rules of origin and fills in gaps in relationships where needed. Despite the political advantages of such an approach, the study argues for a more aggressive undertaking, as the complexities of multiple product rules and intraregional PTAs will remain.

“If governments in the region are really committed to strengthening both the political and the economic cases for integration,” said IDB trade research specialist and the study’s coordinator, Mauricio Moreira. “Time, unfortunately, is not on their side.” 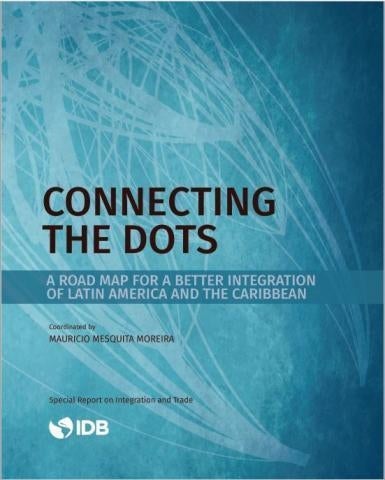