A new report by the Inter-American Development Bank charts a course for a massive infrastructure transformation in Latin America and the Caribbean through gains in efficiency, use of digital technologies, and a focus on quality and affordability of consumer services rather than structures.

Even small improvements in service efficiency by increasing digitalization and other actions can boost growth by 5.7 percentage points over a 10-year period. For Latin America and the Caribbean, this represents approximately $325 billion in additional income over ten years.

Infrastructure improvements will reduce inequality and help vulnerable populations especially hard hit by the COVID-19 pandemic. As service efficiency increases and prices drop, the incomes of the poorest people would increase 28 percent more on average than the incomes of the rich over ten years, the report finds.

“Infrastructure will be a critical component as we build our post-pandemic economies and aim to reduce inequality,” said IDB Chief Economist Eric Parrado. “Budgets will be tight, so we must invest wisely and sustainably. Our report recommends areas where government policies can promote innovations and bring a service-oriented vision to infrastructure.”

From Structures to Services: the Path to Better Infrastructure in Latin America and the Caribbean is part of the Development In the Americas flagship series and the result of a multi-year investigation into the latest trends in water, energy and transportation sectors and how they can be incorporated by countries in Latin America and the Caribbean. The region suffers from large infrastructure gaps with wealthier economies. The region invested 2.8 percent of its GDP in infrastructure over the last decade, half the level of emerging Asia. 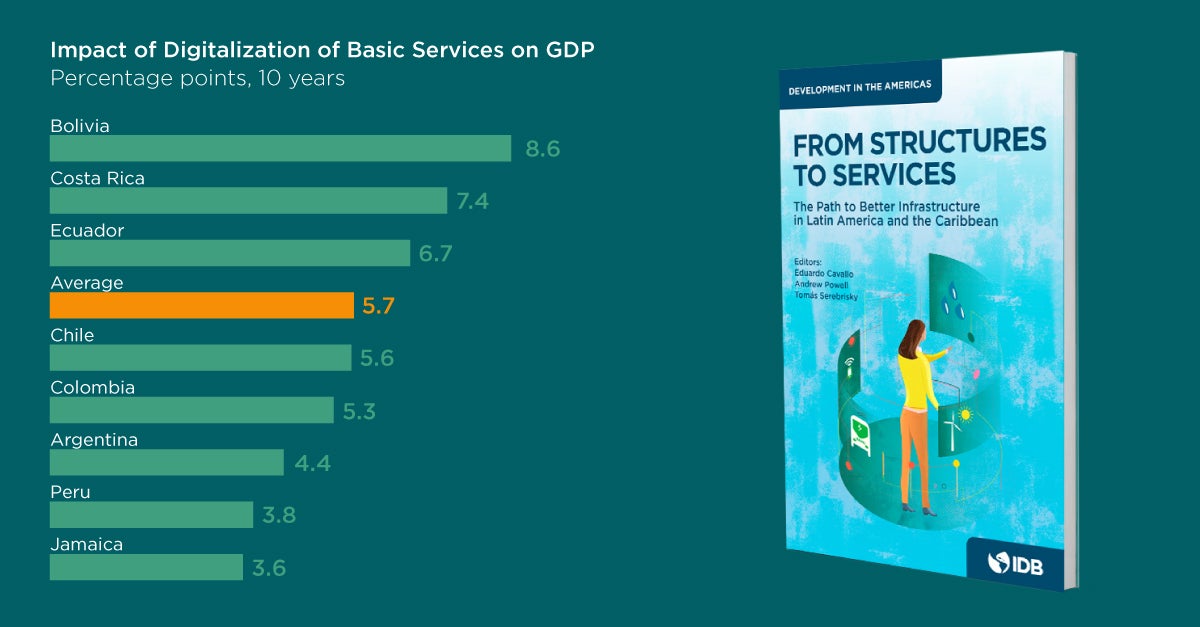 “For too long we’ve focused on bricks, pipes and other hard assets,” said Agustín Aguerre, the IDB’s Manager for the Infrastructure Department. “Digital technology allows us to better understand how people use our roads, consume electricity and water. Our future infrastructure will be cheaper, more sustainable and better serve our citizens.”

The region performs well in terms of basic measures of access but poorly in terms of the quality of services. For instance, 97 percent of Latin American urban households have access to water but less than 40 percent of sewage in cities is treated.  The average commuting time in the region’s big cities is 90 minutes. The region also lags in internet penetration and download speeds in Latin America and the Caribbean are ten times slower than in OECD countries.

In addition to low quality of services, households and firms face high prices. The poorest 50 percent of households spend 14 percent of their income on water, energy and public transport – 30 percent more than in the other developing regions. Consumers spend more on water, electricity and other services in Latin America and the Caribbean despite governments providing close to 1 percent of GDP annually in operational subsidies to service providers.

To rectify these shortfalls, the book envisions a future where investments take into account the region’s rich natural capital, where individuals, firms and even cities and regions are more empowered over centralized authorities or utilities thanks to technological innovations. This decentralization is a powerful incentive for households and firms to adapt, for instance, renewable energy.

Smart meters allow customers to track the quality of the water they receive, monitor their consumption, learn about their water use patterns, pinpoint ways to be more efficient, and better understand their bills. This is critical in a region where 35 percent of the population live in areas of moderate to high levels of water stress.

GDP would be 1.2 percent higher over ten years if 30 percent of car and bus fleets were powered by electricity, according to the report, which reviews the potential impacts in autonomous, connected, electric and shared vehicle technology.

Project execution also has room for improvements. Cost overruns and time delays account for 35 percent of the total public investment in the region, or the equivalent of 0.65 percent of the region’s GDP. Drones and satellite technologies, among others, could be used to improve the planning and engineering phases of construction projects. Emerging technologies could reduce project costs by between 10 percent and 50 percent, the report estimates.

Policies and regulations need to adapt

Technology will not just bring greater efficiency and reduce prices but will change the very nature of markets for services. These gains will only be realized if policies and regulations adapt. The report identifies where reforms are required. Ministries and agencies that regulate energy, transport, and water will have to update regulatory frameworks to make the most of digitalization opportunities and to ensure greater competition leads to tangible benefits for consumers. Only one-third of countries in the region enacted or updated laws to regulate the communications sector after 2010, while half of the countries have laws that were enacted in the 20th century and have been only partially updated since. More and faster policy action is needed.

Given climate change, electricity pricing structures will need to shift from a pricing scheme based on the volume demanded to one with a higher fixed component to cover the investment required to expand and maintain the electricity transmission and distribution network.

“As Latin America and the Caribbean speeds from structures to services,” the report argues, “regulators must act now to catch the train and keep the process on track to better infrastructure in the region.” 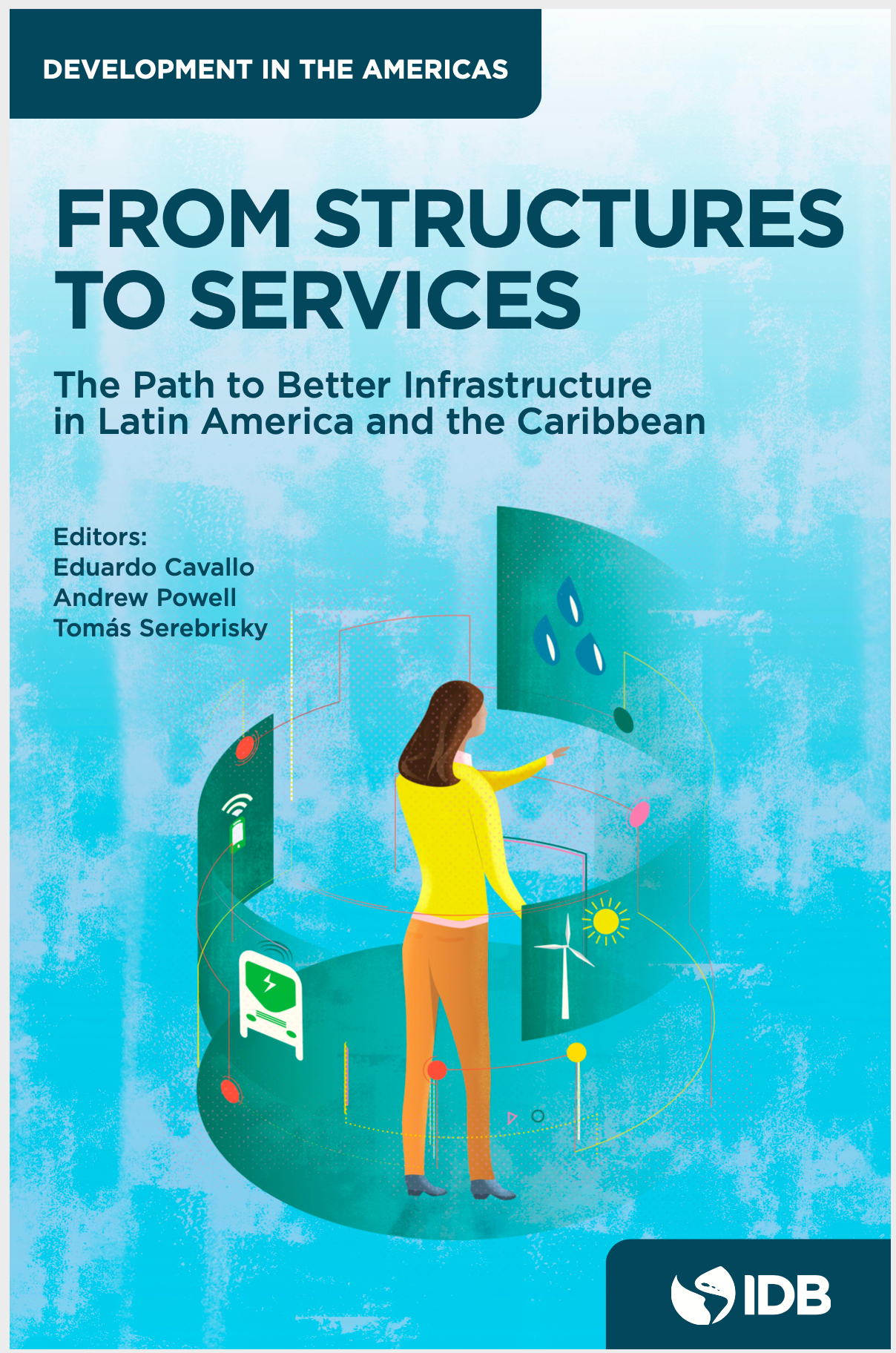