The value of exports from Latin America contracted by 3.2 percent in the first quarter of 2020 compared to the same period in 2019, according to a new report by the Inter-American Development Bank that analyzes the trade performance of 15 countries in the region.

The contraction responds to the continuation of a downward trend that began in early 2019, when exports from the region declined by 2.2 percent, and to the first effects of the economic crisis triggered by the COVID-19 pandemic.

The downturn in global demand hit the region through both the price and volume channels, according to the latest edition of Trade Trend Estimates for Latin America and the Caribbean.

The drop in intra-regional export flows within Latin America (-8.6 percent) was the main contractive factor in the first quarter, followed by the downturn in shipments to the European Union (-7.1 percent) and the United States (-1.0 percent). Although in recent years China had been the main driving force behind Latin America’s external sector, its demand for imports from the region came to a standstill (-0.1 percent). The rest of Asia was the only expansionary factor in Latin America’s external sales.

The drop in the value of the region's exports is estimated to be around 30 percent year-on-year in April and the downward trend will continue at least until June 2020, according to IDB estimates.

“Looking ahead, it is likely that regional exports will contract even more severely than during the Great Trade Collapse of 2008–2009, when they fell at an average annual rate of 24 percent over 13 months,” said Paolo Giordano, Senior Economist at the IDB’s Integration and Trade Sector, who coordinated the report.

Latin America’s export volumes fell by an estimated 1.2 percent year-on-year in the first quarter of 2020, after growing 0.5 percent in 2019.

The contraction in global demand put downward pressure on the prices of the region’s main export commodities.

The price of oil fell by 32.0 percent year-on-year between January and April 2020, when inventories built up in response to plummeting global demand.

Other products whose prices dropped in the same period include copper (-11.9 percent), soybean (-2.2 percent), and coffee (-4.4 percent). Iron ore was the only major export commodity from Latin America whose price rose in the January-April period (2.9 percent).

The first subregion to experience the trade contagion of the COVID-19 pandemic was South America, whose exports are concentrated in commodities and for which China is a core partner. Its exports contracted at an estimated rate of 7.6 percent after dropping 6.2 percent on average in 2019.

Mesoamerica’s export growth slowed from 2.5 percent in 2019 to 1.3 percent in year-on-year in the first quarter of 2020, which reflects the downturn in the growth of Mexico’s external sales (0.6 percent). Continuing a trend that began in mid-2019, exports from Central America accelerated remarkably, increasing by 9.1 percent year-on-year in the first quarter of 2020. However, both trends reversed in March, mainly because of declining demand from the United States.

The region’s total imports fell by 4.0 percent, evidencing the deepening of the contraction of economic activity in several countries of the region as a result of the health crisis and the policies implemented to contain it.

The report was produced by the IDB’s Integration and Trade Sector and its Institute for the Integration of Latin America and the Caribbean (INTAL). 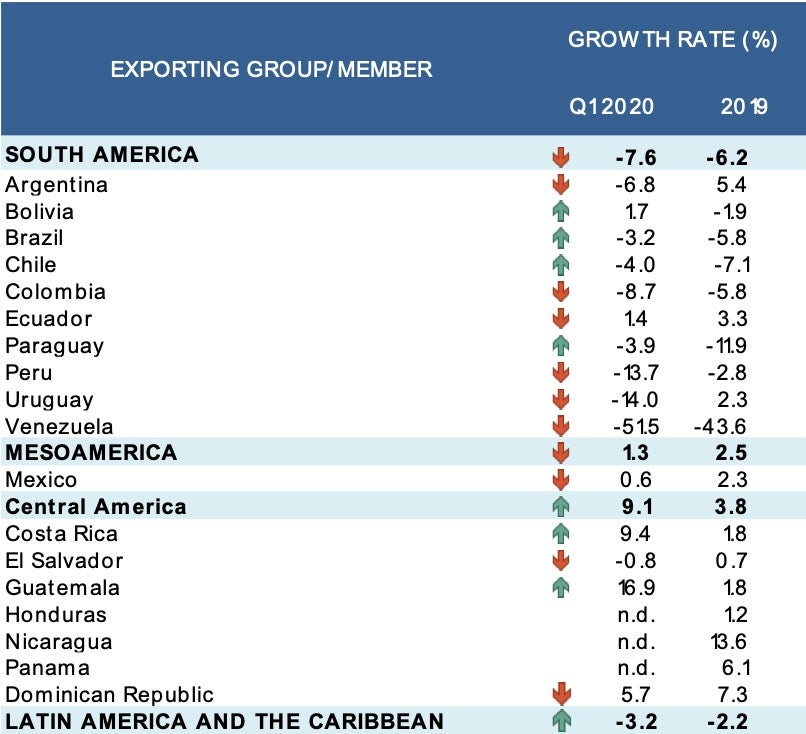