The value of exports from Latin America grew 8.9 percent in the first quarter of 2021 compared to the same period in the previous year, consolidating a change in trend after the contraction caused by the COVID-19 pandemic, a new report from the Inter-American Development Bank has found.

Exports are estimated to remain on a growth path for the next few months, according to the latest edition of the Trade Trends Estimates: Latin America and the Caribbean series, which analyzes the trade performance of 18 countries in the region.

However, the recovery remains fragile as it has been driven exclusively by higher export prices.

“The pandemic will continue to affect domestic markets in the coming months,” said Principal Economist at the IDB’s Integration and Trade Sector, Paolo Giordano, who coordinated the study. “Importing growth from the rest of the world through international trade will be crucial to overcoming the worst economic crisis in a century.”

The incipient trade recovery was driven by improvements in export prices, as real flows continued to decline. The volume of exports from the region fell by an estimated 2.2 percent year-on-year in the first quarter of 2021, after contracting by 7.8 percent the previous year. However, a rebound is underway since March in some countries.

Exports from Latin America to China increased by an estimated 34.7 percent year-on-year in the first quarter. Sales to the United States and the European Union also increased, albeit at a slower pace (3.9 percent and 4.0 percent, respectively). Intraregional purchases from Latin America rose 11.6 percent.

In the first four months of 2021, the prices of various commodities exported by Latin America rose close to historic highs. The upward trend in the price of extractive products was more pronounced, particularly in the case of iron ore (93.6 percent), copper (57.9 percent), and oil (41.7 percent). The performance of agricultural products was more varied: exports of soybeans grew by 60 percent, sugar by 27 percent, and coffee by 11.9 percent.

A key factor in the evolution of prices has been the global economic recovery, driven in part by massive fiscal and monetary stimuli in several countries and the depreciation of the US dollar.

In South America, exports are estimated to have grown by 14.4 percent in the first quarter of 2021 after falling by 9.5 percent in 2020. The subregion has particularly benefited from increased demand from China. 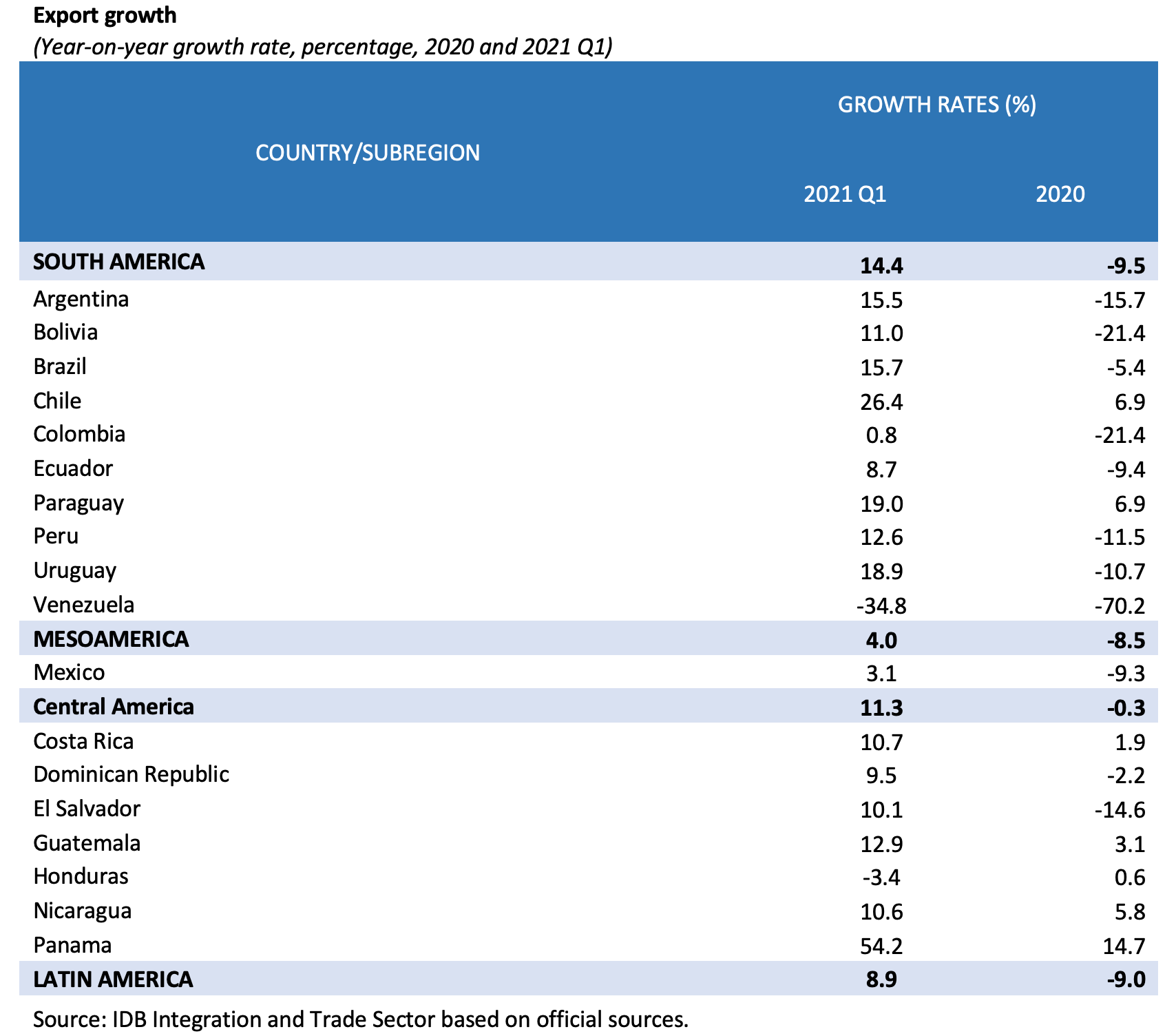 Exports from Mesoamerica increased an estimated 4 percent year-on-year in the first quarter of 2021, after falling 8.5 percent in 2020. In Mexico, export values experienced a modest recovery, as external sales increased by 3.1 percent in January–March 2021 compared to the same period in 2020. Shipments from Central America grew by 11.3 percent over the same months. The United States explained two-thirds of the total increase in exports from Mesoamerica, although sales to the northern market were less dynamic than to other destinations.

Total imports from Latin America increased by an estimated 8.7 percent year-on-year in the first quarter of 2021, after falling by 15.1 percent in 2020.

The report was prepared by the IDB’s Integration and Trade Sector and its Institute for the Integration of Latin America and the Caribbean (INTAL).