Call for proposals to find solutions that promote integration of different modes of transport in self-sustainable stations in the city is open until May 18th, 2022.

The Inter-American Development Bank (IDB) and the city of Curitiba, in Brazil, are launching a call to find innovations in transportation, energy, and state-of-the-art technologies that will reduce the number of cars and motorcycles in the city. This initiative is part of Curitiba’s  modernization plan for the network of bus lanes and passenger. It includes a new self-sustaining station model that will function as an intelligent multimodal transport hub. An information session will be held on April 26th, 2022.

The international public call for the prototype station, estimated to cost US$970,000, is open and part of the Sustainable Urban Mobility Program, which has financing of US$106 million from the IDB. It promotes integration with other forms of transport, such as carpooling and shared bicycles, and emphasizes the energy matrix of the teams. The station's solar energy will be captured through photovoltaic panels to ensure efficiency throughout the operation, from internal air conditioning to monitoring and users’ communication systems.

The new station must also have a design that considers gender and disability issues, as well as the potential to become mobility centers and serve as a model for other cities.

The selection of the winning proposal will be made according to criteria based on performance indices and cost evaluation throughout the entire project, seeking the best cost-benefit ratio. Once the model has been developed and approved, it will be replicated in the 12 other  stations of the Inter 2 itinerary.

“Curitiba is already a reference in Latin America for transportation and in this program, innovation is used as a starting point to meet new demands and once again revolutionize urban mobility. It is another important step towards sustainability and social and gender inclusion,” says Morgan Doyle, IDB representative in Brazil.

This model of international competition focused on solutions is unprecedented for the municipality. It covers the contract design of the executive project, the execution of the work, the installation of the solutions and the monitored operation for the validation and improvement of technologies. The innovation component of the model will facilitate proposals that consider environmental, economic, and social sustainability aspects, as well as efficiency and scalability for the 12 other stations. Consortia are authorized to allow companies with complementary experiences and innovative solutions to participate in the competition.

In addition to improving stations, the IDB-financed program includes projects that increase the capacity and speed of Inter 2 and Interbarrios II, which carry the largest number of passengers in the city. This includes more than 70 km of road rehabilitation works, including exclusive channels, binaries, cycle paths, as well as new integration terminals with the Intermunicipal Transport Network (RIT). The improvements in the sixth transport axis of the city will benefit more than 180,000 passengers daily.

The strength of the program is proportional to the challenge of the urban mobility that the city of Curitiba has defined for the coming years. "Curitiba has always been a reference in the urban transport system and we are consolidating this vocation with the new era of sustainable intermodality, with strategic partners to achieve these objectives," said the city's mayor, Rafael Greca.

Learn more about the call for proposals  (in portuguese) and join the information session that will be held on April 26th, 2022. The deadline for submitting proposals has been extended until May 18th, 2022.

The Inter-American Development Bank is devoted to improving lives. Established in 1959, the IDB is a leading source of long-term financing for economic, social, and institutional development in Latin America and the Caribbean. The IDB also conducts cutting-edge research and provides policy advice, technical assistance, and training to public and private sector clients throughout the region. 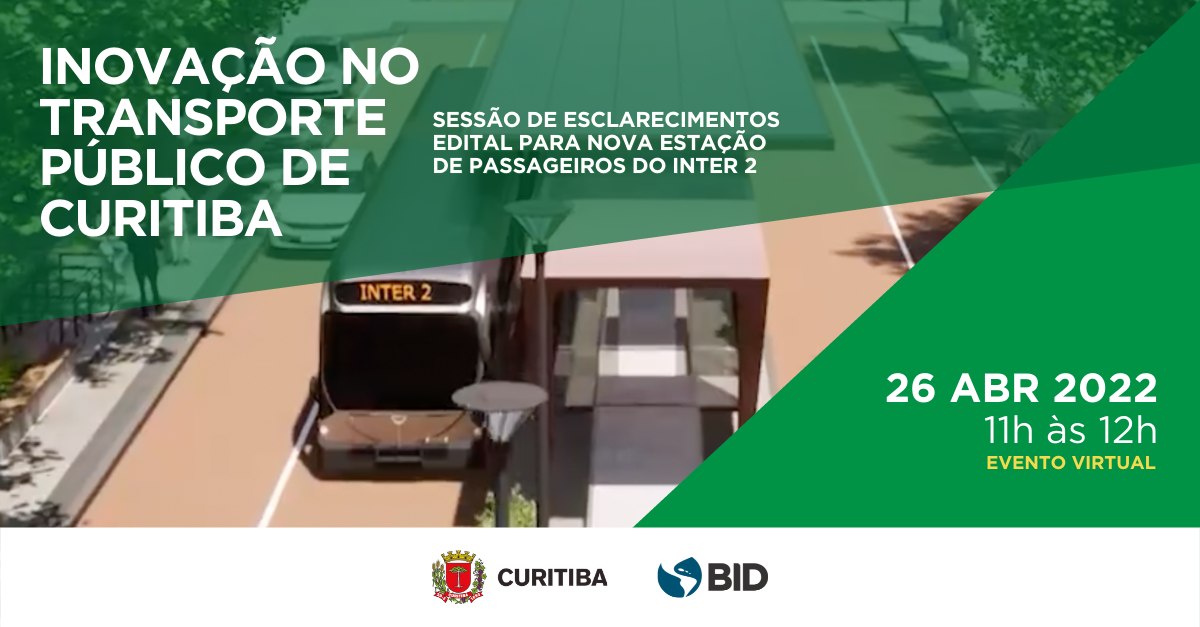 Transport at the BID

Brazil and the IDB

Learn more about the call for proposals and join the information session that will be held on April 26th, 2022.