Latin America and the Caribbean will suffer an unprecedented economic shock from a sharp downturn in tourism, according to a new paper by the Inter-American Development Bank.

The report – Extreme Outlier: The Pandemic’s Unprecedented Shock to Tourism in Latin America and the Caribbean – launches a new global Tourism Dependency Index for countries, including 35 Latin American and Caribbean economies. It urges governments to take unprecedented measures to prevent the spread of the virus, and to support citizens and economies through this shock to the most tourism-dependent region in the world.

Based on simulations, the direct impacts of the shock to tourism flows for The Bahamas could cause an economic contraction relative to pre-crisis baseline estimates of between 8 percent and 13 percent. Similar exercises incorporating the potential indirect contribution of tourism for economic activity would further increase these loss estimates. While less dependent on tourism than many Caribbean economies, large economies like Brazil and Mexico could experience shocks to growth linked to this sector of between 2 and 5 percent, respectively, relative to pre-crisis estimates. 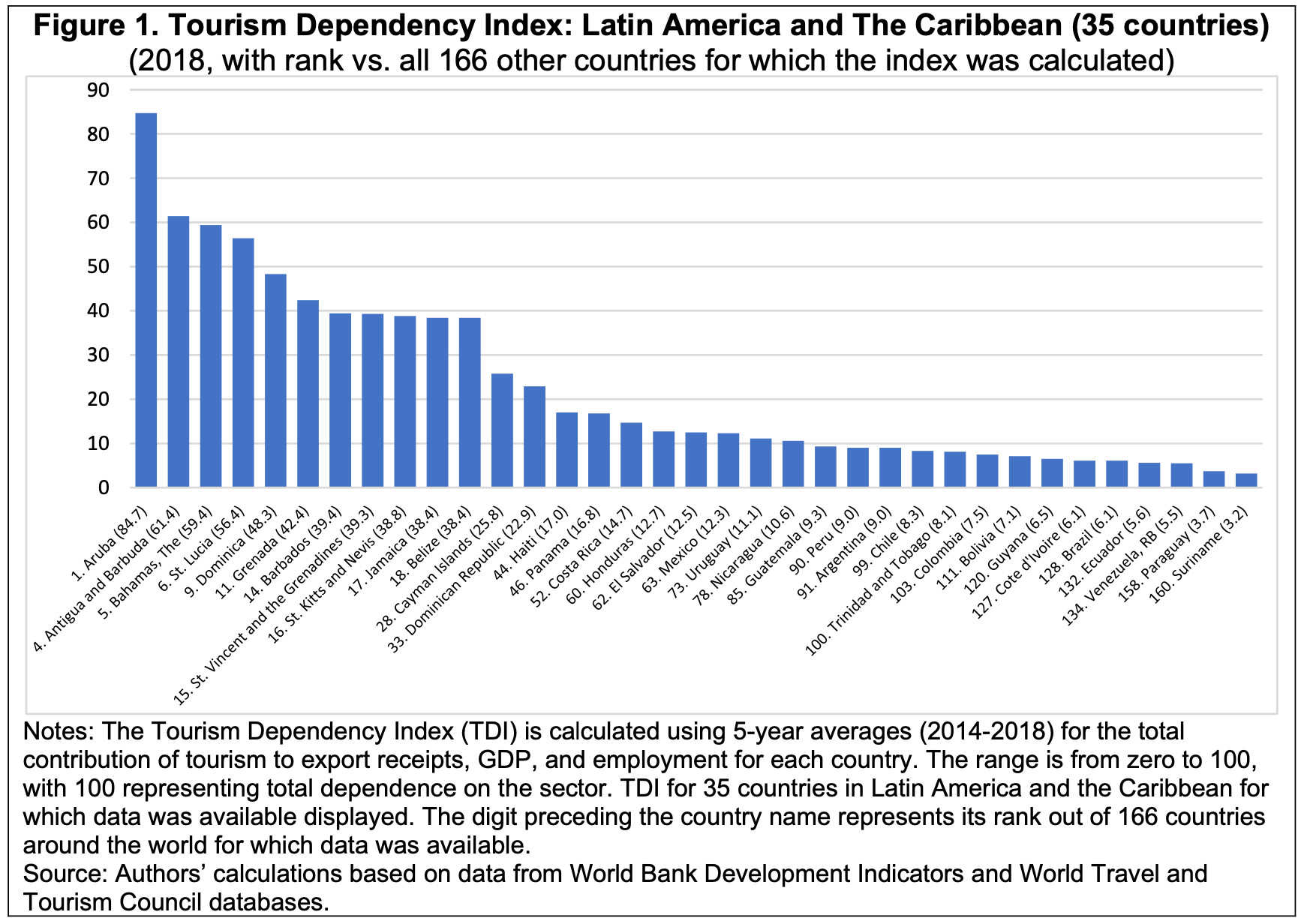 Still, the sector is significant for some of the largest economies in the region. From 2014 to 2018, tourism accounted for an average of about 16 percent of both economic output and employment in Mexico, and about 10 percent of both GDP and employment for Uruguay, Argentina, and Chile. In Brazil, tourism was responsible for about 8 percent of employment—representing hundreds of thousands of jobs.

“Taken together, our Tourism-Dependency Index and various related indicators suggest that countries in Latin America and the Caribbean are likely to suffer more than most in terms of the COVID-19 generated shock,” said IDB economics advisor for the Caribbean Department, Henry Mooney. “Governments can provide focused and tailored support to preserve productive assets, help replace lost incomes for individuals engaged in the sector, and use the interim period to prepare the ground for the resumption of activity under uncertain circumstances.”

The authors analyzed six historical shock episodes to compare against the outbreak of COVID-19, including the 9-11 attacks and the Ebola outbreak. None of those historic precedents came close to the shock to tourism arrivals during the current pandemic. While tourism flows to the region contracted by as much as about 4 percent (relative the previous year) during the global financial crisis, the Pandemic could lead to a negative shock of between 40 and 70 percent in a single year—an extreme outlier. 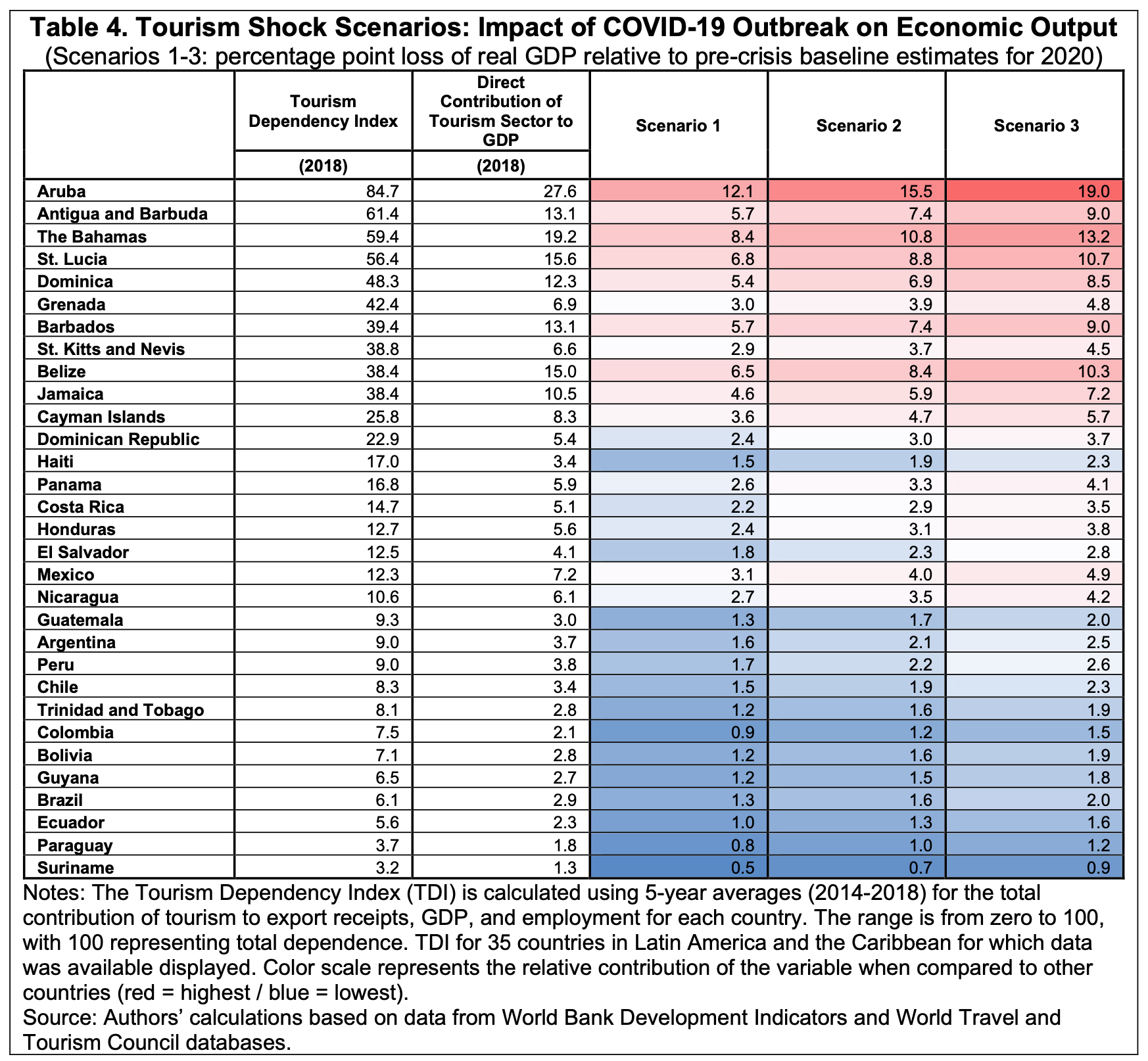 The report also simulates tourism-driven shocks to employment, export earnings and the balance of international payments. Aruba, where almost one in three jobs is linked to the tourism industry, could see a disruption of employment in excess of 20 percent of the entire workforce. The report also highlights just how destabilizing a shock of this nature and magnitude could be for external sustainability, forcing many economies in the region to deal with unprecedented pressures on the current account and exchange rates.

“Even for larger and more diversified economies, the net impact on economic activity could still lead to contractions on a scale not often experienced,” said IDB researcher María Alejandra Zegarra. “Countries entering the crisis with inadequate policy frameworks or lacking strong external buffers will be particularly hard hit.”

The report is included in the eBook COVID-19 in Developing Economies, a collaboration with the Center for Economic Policy research (CEPR).

The Inter-American Development Bank's mission is to improve lives. Founded in 1959, the IDB is one of the main sources of long-term financing for the economic, social, and institutional development of Latin America and the Caribbean. The IDB also conducts cutting-edge research projects and offers policy advice, technical assistance, and training to public and private clients throughout the region.

Download Extreme Outlier: The Pandemic’s Unprecedented Shock to Tourism in Latin America and the Caribbean