The leaders discussed the creation of joint country platforms, an initiative proposed within the G20which would maximize the contributions of development partners as a group for each country in question, including through better coordination and strengthened efforts to mobilize private-sector investment.

The three leaders also raised the issue of debt sustainability and set a plan for their institutions to address the issue together and be as responsive as possible to their clients in the region.

“As the region hardest hit by COVID-19 and its economic aftermath, Latin America and the Caribbean require a joint multilateral response in order to prioritize actions and maximize resources,” said Claver-Carone.

Claver-Carone hosted the meeting on his second day as President of the IDB. In his inaugural remarks on October 1, he listed among his priorities closer collaboration with the World Bank, the IMF and other multilateral development banks to address the needs of the region, including through a country platforms mechanism.

He also highlighted regional job creation and recapitalization of the IDB as goals for his mandate.

The Inter-American Development Bank is devoted to improving lives. Established in 1959, the IDB is a leading source of long-term financing for economic, social, and institutional development in Latin America and the Caribbean. The IDB also conducts cutting-edge research and provides policy advice, technical assistance, and training to public- and private-sector clients throughout the region. 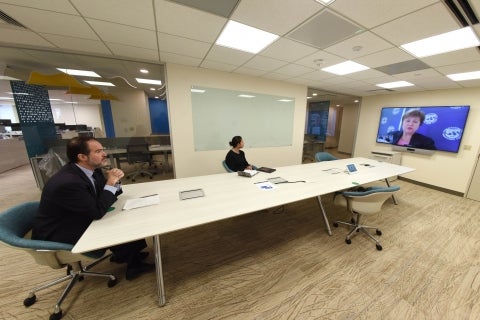