The report’s baseline scenario sees the region growing 4.1 percent this year after last year’s 7.4 percent loss – the worse decline recorded in a single year since 1821. Growth is predicted to revert to 2.5 percent per year in 2022 and beyond. To grow more vigorously the region needs to enact a series of reforms to improve productivity, help connect firms to global value chains, embrace the digital economy and promote job creation in an inclusive, sustainable, and resilient way.

The baseline scenario assumes vaccine rollout programs proceed as planned and economies continue to be open, together with a healthy global economy. A more pessimistic scenario with weaker global growth and potential financial shocks could bring growth down to just 0.8 percent this year and -1.1 percent in 2022, according to IDB projections. The positive scenario foresees the region growing 5.2 percent in 2021 and 3.9 percent next year.

Latin American and Caribbean economies are emerging from the crisis provoked by the coronavirus with high unemployment, and health systems pushed to the brink. The crisis affected vulnerable populations more severely, further exacerbating the region’s inequalities.

Opportunities for Stronger and Sustainable Postpandemic Growth was issued during the IDB’s Annual Meeting, held virtually in Barranquilla.

“Latin America and the Caribbean has a narrow but clear path to emerge stronger from the pandemic and social shocks of recent years,” said IDB Chief Economist Eric Parrado. “Healthy fiscal systems can help us unlock our potential, by leveraging the reallocation of resources across sectors to drive productivity growth, promote formal employment, and achieve a greener future that defies the false dichotomy of economic growth and environmental sustainability.”

Governments provided $485 billion in fiscal support during the pandemic, with packages averaging 8.5 percent of GDP, but this is pushed upwards by a few countries with big packages, while more than one-third of countries provided more modest support of 3 percent of GDP or less, reflecting available fiscal space. In contrast, fiscal packages in advanced economies averaged 19 percent of GDP. 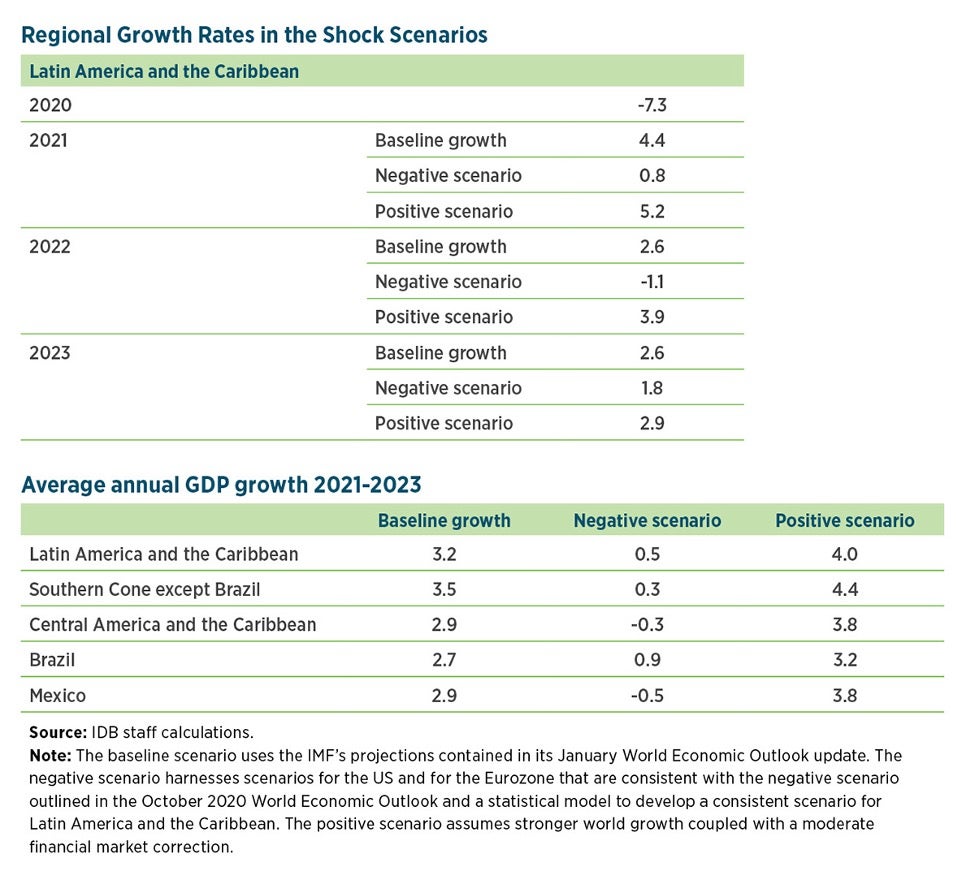 However, a strong recovery coupled with reforms would stabilize debt at 72 percent and which then could begin to fall, the report notes. Countries with high tax takes and high spending would benefit significantly from greater efficiency in both taxation and spending.

Government revenues could save a more than 4 percent of GDP by better targeting of social transfer programs, matching public wages with private sector ones, and improving government procurement, among other actions. Countries with low tax takes should focus on increasing revenues without sacrificing growth. Higher revenues and savings should be spent on well-considered projects with high social and growth benefits, particularly in infrastructure needed to construct a digital economy that provides more job opportunities for the economy of the future.

“Given the fiscal challenges and high debt levels, improving fiscal institutions should be a high priority,” said IDB Principal Advisor and one of the report’s coordinators Andrew Powell. “Stronger institutions would enhance credibility and allow for a more gradual adjustment with lower interest rates to ensure debt sustainability.”

Labor markets were severely impacted by both external shocks and domestic lockdowns. In 12 countries of the region, an estimated 26 million jobs were lost between February and October 2020, falling to 15 million by February 2021. Given the shock, extreme poverty is projected to increase from 12.1 percent to 14.6 percent while moderate poverty is projected to rise from 11.7 percent to 14.6 percent.

Only a strong recovery will allow these rates to decline significantly.

The region has an opportunity to take advantage of regional and global value chains as companies look for stronger and more diverse supply chains. A bottom-up regional integration approach can streamline trade agreements and provide a boost to regional value chains.

The region faces a growing environmental crisis as well as the health crisis. Adopting ambitious climate goals does not entail any sacrifice in terms of jobs or growth. Countries should invest for a more environmentally sustainable future aimed at zero net carbon emissions over a reasonable period of time. The right policies can create 15 million jobs by 2030 in the region, and boost growth by more than 1 percentage point per year.

“While economic recovery from COVID-19 may be already underway, previous crises demonstrate that the pace of recovery may be uneven and biased against high productivity sectors,” said IDB Principal Economist and co-coordinator of the report, Eduardo Cavallo. “Enhancing productivity through innovation and reallocation and investing efficiently in quality infrastructure with high spillovers on other economic sectors, will help the region seize the opportunities for stronger post-pandemic sustainable growth.” 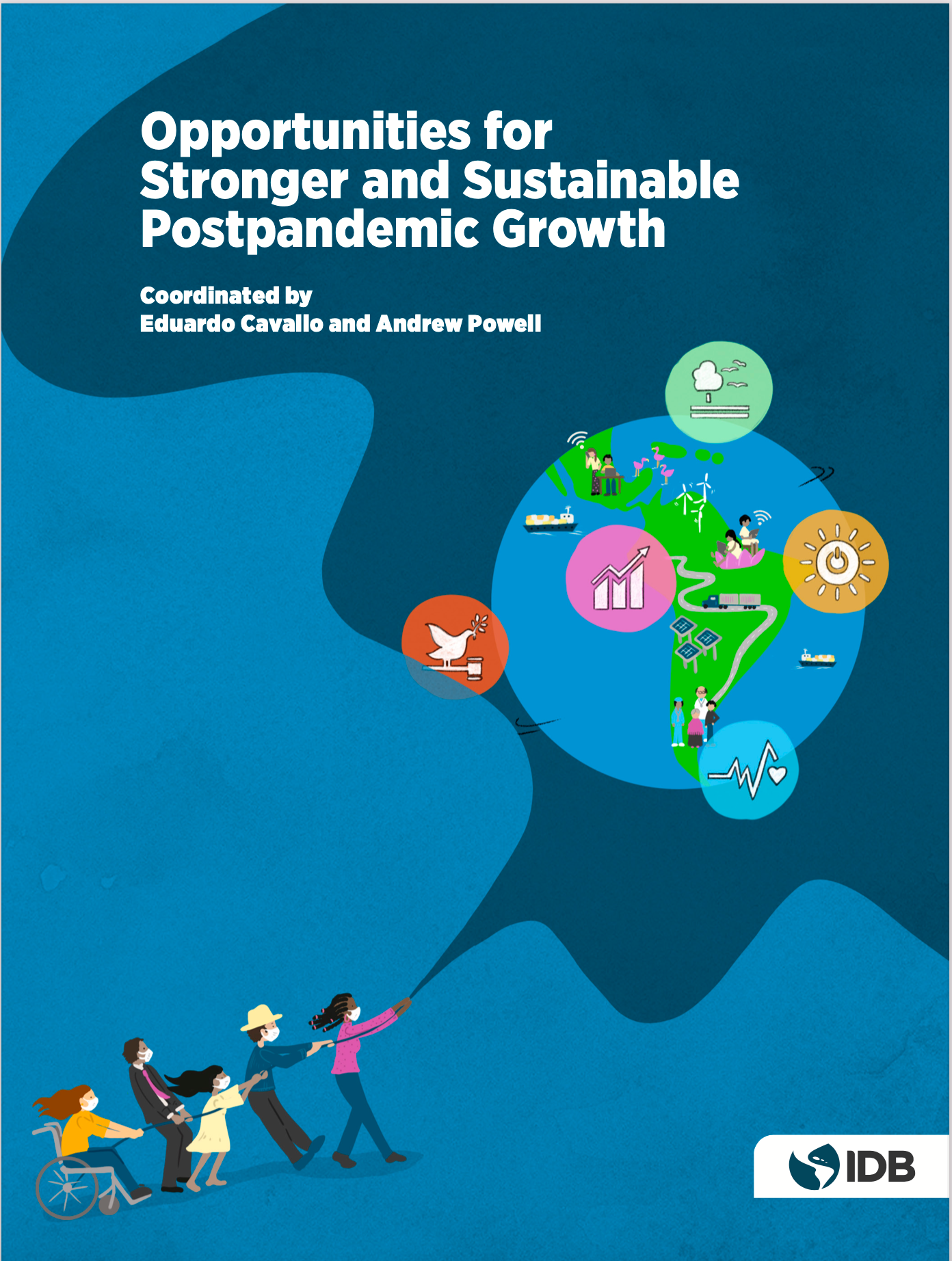