The annual report on Central America, Haiti, Mexico, Panama and the Dominican Republic offers proposals on how to prevent inequality and social discontent in the region from rising.

The COVID-19 crisis could erase social progress achieved in Central America, specifically in reduction of poverty and inequality, and also have a disproportionate effect on people who are the most vulnerable. In order to keep polarization and social discontent from rising, governments must strengthen social services such as education and health, make their revenue and public spending mechanisms more effective, and generate more political and social inclusion for groups which are under-represented.

These are the main conclusions of the report Inequality and Social Discontent: How to Address Them through Public Policy: Economic Report on Central America, the Dominican Republic, Haiti, Mexico, and Panama, presented to governments at the 35th annual meeting of governors from Central America and the Dominican Republic and presented today at a virtual event. During this session the main findings of the study were outlined and a dialogue was held with regional experts in inequality, redistribution of wealth, and social discontent.

After contracting in 2020, the GDP of Central America, Panama and the Dominican Republic is expected to recover partially this year with growth of 3.8%, which places them slightly above what is forecast for the rest of Latin America and the Caribbean. Despite this outlook and the measures that many countries have already taken, the rate of poverty is expected to grow an average of 6 percentage points. That means 2.8 million people will fall into that category.

An increase in inequality is also expected in most countries of the region. The pandemic has hit the vulnerable middle class harder because it is active in economic sectors most affected by the health crisis, is heavily represented in the underground economy and in rural areas, lacks health care, and struggles to receive assistance. These people also have less of an option to work and study remotely due to the lack of tools such as the internet.

Besides an economic analysis, the study carries out an assessment of perceptions that is based on studying what people are saying online. The regional economic adviser of the IDB's Department for Central America, Haiti, Mexico, Panama and the Dominican Republic, which is the co-editor of this study, says “the analysis carried out tells us that there is a process of listening to citizens that is not taking place. We need to pay more attention to their concerns and expectations, as well as more transparency and accountability, which could lead to a major improvement in the design of public policies."

The economic report states that in order to overcome inequality it is necessary to reduce the gap in human capital. In 2016, spending on education and health in Central America, Panama and the Dominican Republic accounted for 8% of GDP, compared to 9.5% in Latin America and 12% for the countries of the OECD. Increasing the extension and quality of these services should be an essential part of economic recovery policies, on par with restoring levels of investment, production and employment. As for financing, the study suggests that there is much tax-raising potential in the informal economy, with major revenue possible that could raise per capita income by 20% to 30%, depending on the country, and this money could thus be redistributed.

Finally, the study says that polarization is influenced by inequality and linked to the risk of conflict. Although income polarization has been narrowing, it is still very high in Central America, so it would be beneficial to work on inclusion, especially in this region with such a large rural population. For instance, in Honduras, Guatemala, El Salvador and Panama nearly half the population lives in rural areas.

One way to ease the risk of conflict, these authors say, is by having inclusive political institutions. In that sense Central America must make more progress in the political representation of under-represented groups. For instance, in all of the countries of the region, the representation of minorities in congress is 66 percent below what they account for in the population. 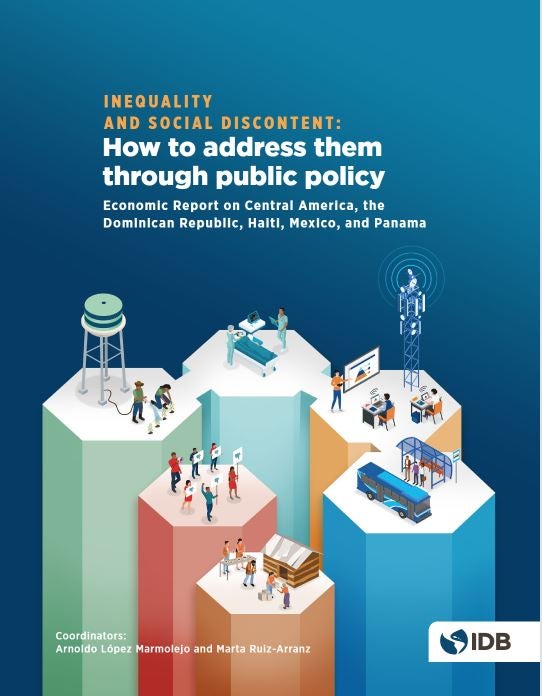 Central America and the IDB

Inequality and Social Discontent: How to Address Them through Public Policy: Economic Report on Central America, the Dominican Republic, Haiti, Mexico, and Panama