Latin America and the Caribbean is especially vulnerable to the impacts of the COVID-19 because inequality is both deep and spread out over multiple dimensions, from race and gender to unequal access to education, health and other services, a new report by the Inter-American Development Bank shows.

The Inequality Crisis: Latin America and the Caribbean at the Crossroads is an unprecedented examination of the root causes of the region’s persistent underperformance in the distribution of income, well-being and opportunities. It takes into account not only the traditional measures of income but also less tangible issues such as geography and trust in institutions.

It provides policy recommendations to bridge those gaps and emerge from the pandemic on a stronger foundation to generate more inclusive growth.

“Inequality in Latin America and the Caribbean is well-known but not necessarily well understood,” said Eric Parrado, Chief Economist of the IDB. “We look at how the social contract is fractured on many levels. The poor are more vulnerable to climate change. Their education and healthcare are worse. Government programs to redistribute income are far less effective in the region than elsewhere. As a result, our schools and cities are segregated by income at a level that is unseen in other regions.”

“Until we take a multidimensional approach to the inequality challenge, the region will continue to suffer not only from social unease, but be vulnerable to external shocks like the pandemic,” Parrado added.

Latin America has historically struggled to deal with crises. The book shows that when GDP has dropped by 5 percent or more, the decline in real wages has usually been large: 10 percent on average but, in some cases, as high as 20 percent. Unemployment has risen, as well, and the number of formal jobs declined. As a result, poverty has typically increased by between 3 and 5 percentage points, even after government relief efforts were taken into account.

The COVID-19 crisis has some particularities that will render it particularly regressive in the short and long term. Immediately after the pandemic hit the region, most governments put in place strict lockdown measures that prevented people from working outside the home. These measures have disproportionately affected low-income households. About 65 percent of the households in the bottom 20 percent of the income distribution had experienced at least one job loss among family members one month into the lockdown. Within the top 20 percent, the percentage of job losses were about 22 percent.

The challenge, the report notes, is ensuring that in the recovery benefits all citizens so that societies become more inclusive and resilient. Otherwise the region will be vulnerable to future economic and climate change shocks.

The region has made advances in narrowing the income gap, particularly during the commodity boom years between 2000 and 2013. Poverty fell, on average, from 42.3 percent in 2002 to 23.1 percent in 2018, as vast swaths of the population moved into the middle class. The 10 percent of its richest citizens earn 22 times more than the poorest 10 percent – a big improvement from the ratio of 49 in 2000.

However, the region lags far behind developed economies grouped in the Organization for Economic Co-operation and Development (OECD), where the richest 10 percent earn just nine times more than the poorest 10 percent. These numbers exclude the Latin American countries in the OECD.

Societies in Latin America and the Caribbean are especially segregated by socioeconomic status. In Brazil, for example, the neighborhood you live in a city contributes more than four times in explaining a wage differential than your city or state.

Other drivers of inequality are gender and race, researchers found. Women earn 87 cents for every dollar earned by a man. While deeply rooted social norms exclude women from top executive jobs, they work on average three times more at home than their partners.  Adjusting for education, Afro descendants earn wages that are on average 17 percent lower than the rest of the population, while the adjusted wage gap for indigenous people is 27 percent.

Education is another driver of inequality. Differences in education explain a quarter of the wage inequality across indices for Latin American workers. While the poor have more access to educational services than before, schools in the region are more likely to be segregated by socioeconomic status, suggesting wealthier families are sending their children to private schools in greater numbers than in more developed economies. There are six students from upper income households for every one classmate from a low-income household sharing a classroom in Latin America. The ratio in the U.S. is 3-1 and in Norway it is less than 2-1. High-income individuals in Latin America spend about twenty-five times more on the education of their children than low-income parents. More than 40 percent of secondary enrollments are in private schools, compared with about 10 percent in OECD countries and middle-income countries in other regions.

One of the key elements to correct these inequalities is better fiscal policies, the report says. Through taxes and government expenditures, Latin America reduces inequality by less than 5 percent—the OECD-EU reduces it by 38 percent. In other words, Latin American governments are 8 times less effective than their OECD and EU counterparts in reducing inequality. A major obstacle is that high labor informality in Latin America impacts pensions – a major redistributive tool in the OECD. Also, some social spending programs are inefficient. For instance, three-quarters of energy subsidies benefit the richest 60 percent of the population. Tax evasion is also higher in Latin America than in more developed economies.

The report urges governments and other actors to work together to craft a new social contract. The rich and the upper-middle class enjoy the benefits of formal employment and exert no pressure to improve the quality of public education, infrastructure, and security because private solutions are found. The poor and lower middle classes live in different neighborhoods, attend different schools, visit different health clinics, and make do with recently introduced noncontributory pension and health schemes that are less generous but a welcome innovation, the book says. A re-design of safety nets to render them more inclusive is needed. Repairing the social fabric requires more protection to the poor and lower middle classes, while improving public services to bring the upper middle classes into the public space.

About the IDB
The Inter-American Development Bank is devoted to improving lives. Established in 1959, the IDB is a leading source of long-term financing for economic, social and institutional development in Latin America and the Caribbean. The IDB also conducts cutting-edge research and provides policy advice, technical assistance and training to public and private sector clients throughout the region. 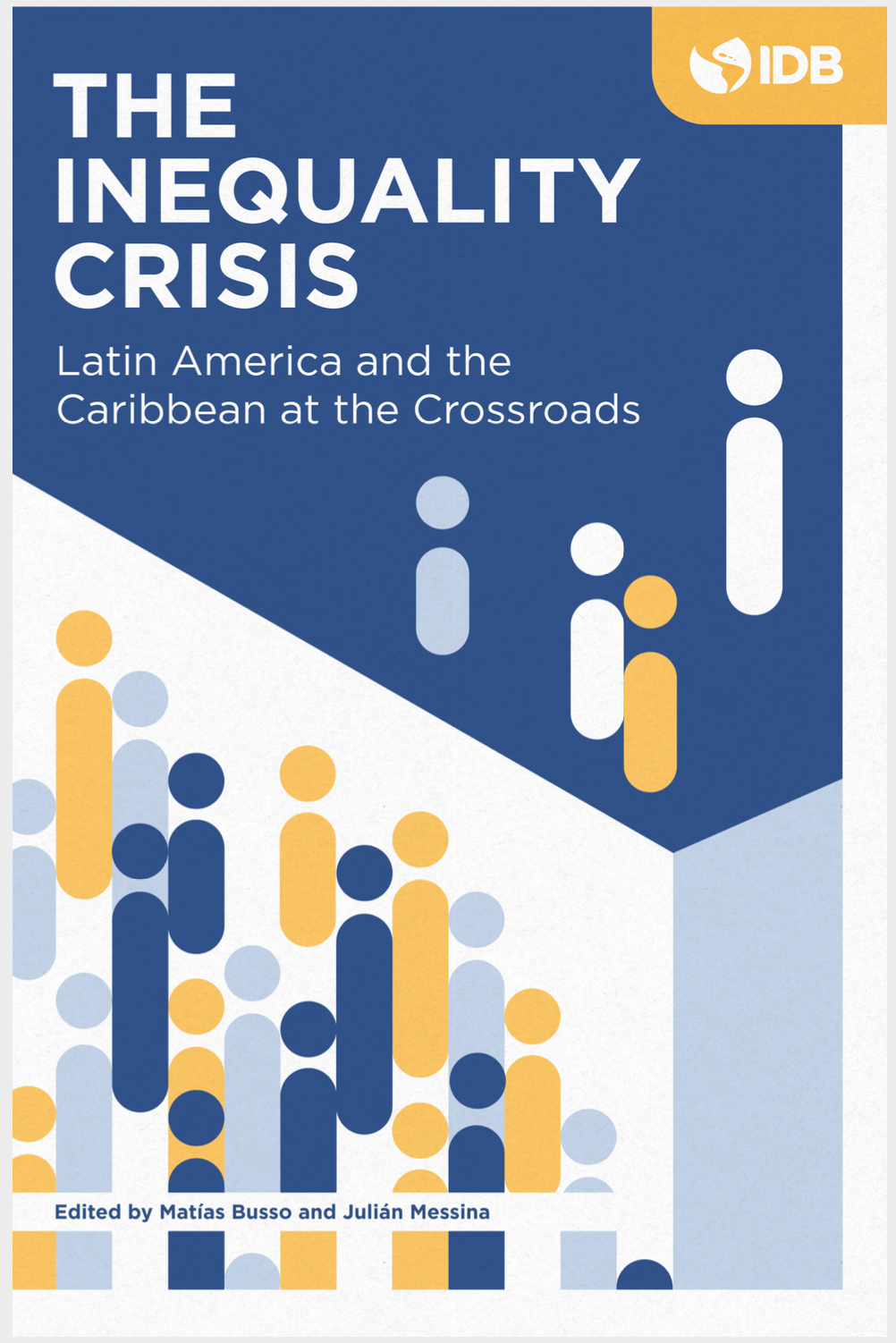 Download the book
The Inequality Crisis, Latin America and the Caribbean at the Crossroads