The Inter-American Development Bank Group’s flagship event ended after three days of panels on innovative entrepreneurship and its role in the region’s post-pandemic recovery.

Innovative entrepreneurship and the role of digital solutions, new technologies, and business models to speed up an inclusive, green, and resilient recovery of the region were the three pillars of the first edition of IDB Lab Forum. The three-day event featured the participants from over 30 countries and brought on stage dozens of experts from a wide array of disciplines as well as hundreds of entrepreneurs, investors, and many actors from the innovation ecosystems of Latin America and the Caribbean (LAC).

In collaboration with strategic partners Coca-Cola, Microsoft, and MasterCard, this new IDB Group platform provided an upbeat view on the combined power of financing, knowledge, and connections to push forward an innovation agenda in Latin America and the Caribbean that will not only speed up its post-pandemic recovery, but will also unleash the region’s colossal creative potential to transform the reality of millions of the region’s most vulnerable communities.

In the words of IDB President Mauricio Claver-Carone, “Our region is both the most unequal in the world and the one with the biggest biological wealth, so we have no option other than to maximize the power of innovation to close the socioeconomic gaps and protect our environment.”

The event was primarily virtual, with an exclusive in-person component in Miami for a limited audience. The forty-plus virtual sessions were a springboard for launching a number of key initiatives:

The in-person segment of the event was held in Miami at The Oasis, within the Magic City Innovation District of Little Haiti, with support from TechnoArt, where four major announcements for the entrepreneurial ecosystems were made:

The event explored leveraging strategies that both help accelerate the region’s productive recovery and are part of the IDB Group’s Vision 2025, such as digitalization, technology adoption, and regional integration. In this respect, one of the thematic pillars focused on discussing the impacts of digital innovation on financial inclusion, particularly for the excluded sectors of the region’s population. Other thematic areas included a detailed overview of companies that encourage early innovation of businesses, initiatives that transform markets and industries for the development of Latin America and the Caribbean, and of entrepreneurship and innovation as engines for recovery.

IDB Lab is the innovation laboratory of the IDB Group, the main source of financing and knowledge for development, focused on improving lives in Latin America and the Caribbean (LAC). The purpose of IDB Lab is to drive innovation for inclusion in the region, mobilizing financing, knowledge, and connections to co-create solutions capable of transforming the lives of vulnerable populations due to economic, social, or environmental conditions. Since 1993, IDB Lab has approved more than $2 billion in projects developed in 26 LAC countries, including investments in more than 90 venture capital funds. www.bidlab.org 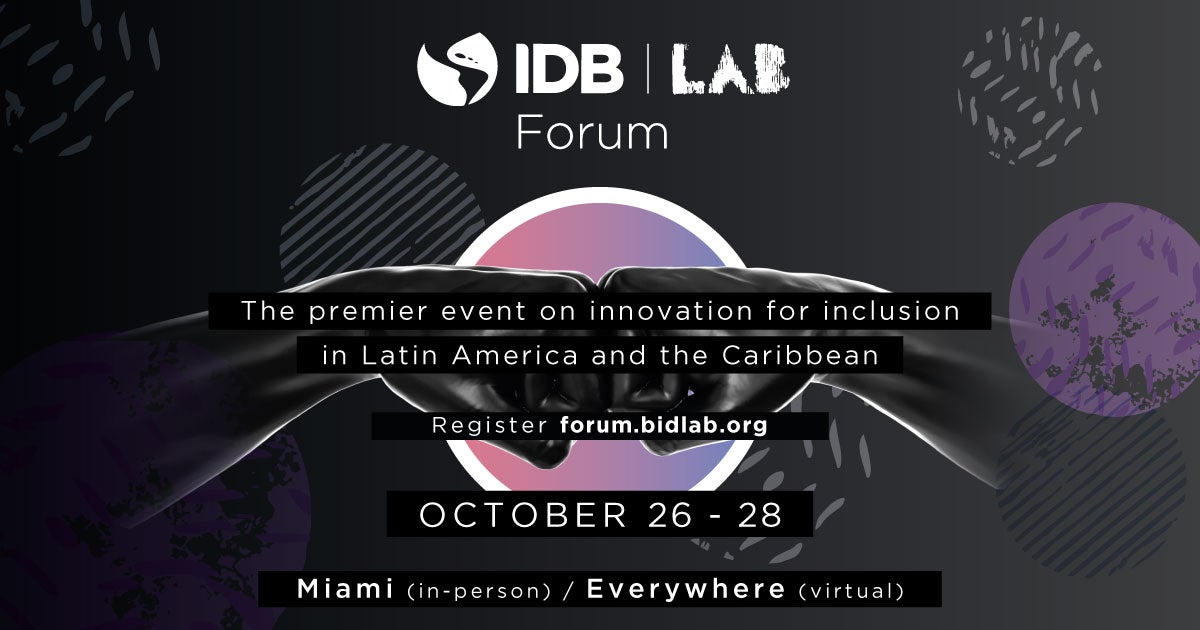