Weathering the Coronavirus Storm in the Caribbean

“This is completely a black swan event. No one saw it coming. It’s affecting every single person on the planet, and we have to muster up courage, first of all, to do the right thing, especially for people who are absolutely desperate and need our help,” says Therese Turner-Jones, general manager of the IDB’s Caribbean Country Department.

Caribbean countries have had to weather many storms in the past, but none that unleashed impacts quite like the coronavirus pandemic. Alongside the lives at stake are millions of livelihoods, and understanding the economic forces at work is essential to planning a way forward for the region.

“Our region is pretty much just climbing out of the recession in 2020. It has taken us a long time to really catch some air, really feel our economies again, and now we are hit with another whammy,” says Turner-Jones.

“We have a crisis that is presenting itself with innumerable ways to reflect and think about doing things differently and we really have to take this seriously. It’s not going to be business as usual.”

Economists at the IDB have been closely tracking the virus’s effects on the region and its economies to provide a basis for needed responses. A newly published report sheds light on potential economic implications for the Bank’s six  Caribbean member countries: The Bahamas, Barbados, Guyana, Jamaica, Suriname, and Trinidad and Tobago. 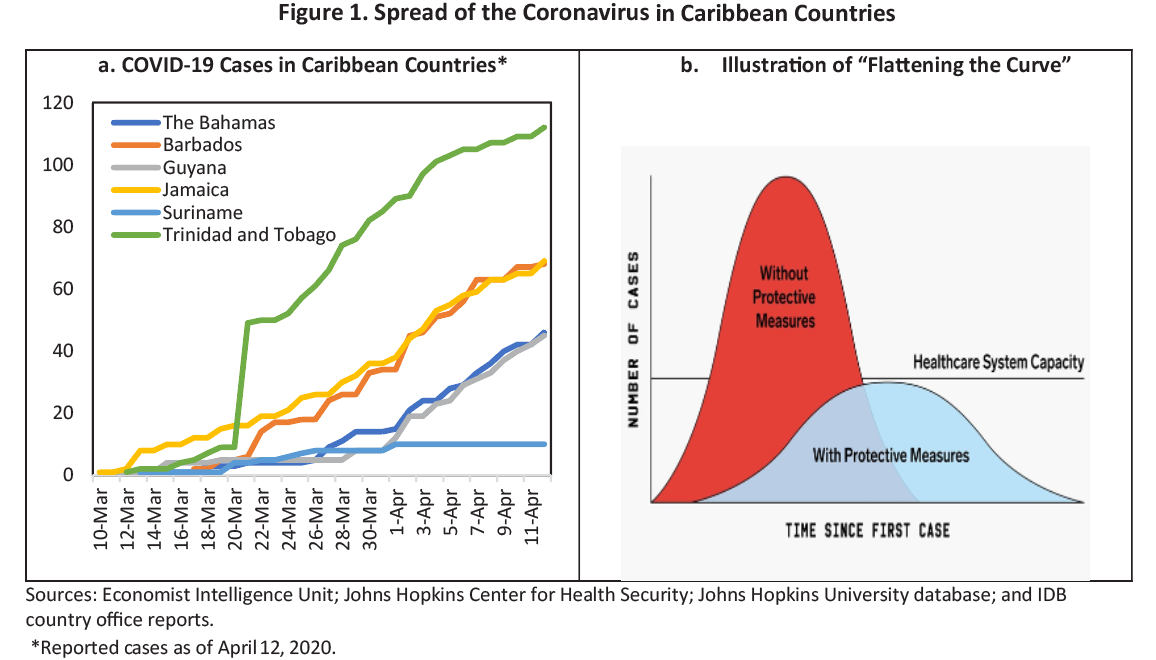 The first of two main challenges behind the economic shock to the region is common to countries across the globe right now: “flattening the curve,” or reducing the spread of the virus. While COVID-19 cases are low in the Caribbean, even in relative terms to its small population, the curve has not begun to flatten in the region. Although public health experts say social distancing and quarantines are critical, the economic uncertainty that comes with those measures provides a powerful counterweight – particularly in a part of the world where reliance on face-to-face transactions is high.

The second challenge derives from the nature of the region’s linkages with the rest of the world. In The Bahamas, Barbados and Jamaica, 34-48% of GDP comes from tourism. With the sector screeching to a standstill, the repercussions are already enormous.

In a worst-case scenario, in which tourist arrivals drop by 75% in the last three quarters of the year, the GDP of The Bahamas would fall by more than 10 percentage points relative to pre-crisis expectations. The coronavirus represents the second major economic shock in a year for the country; Hurricane Dorian inflicted losses that amounted to $3.4 billion, or 27% of GDP. 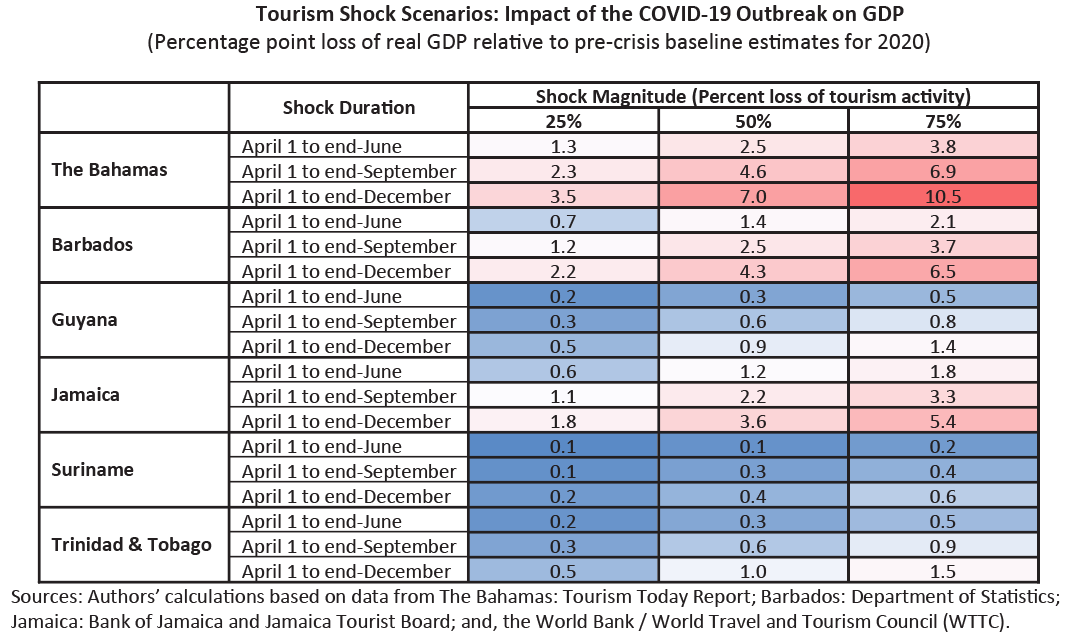 For Barbados and Jamaica, two countries that have been on the road to economic stabilization in recent years, the GDP could also take a significant hit from curtailed tourism. Other key sources for the two countries, foreign direct investments and remittances, are also at risk, given that primary suppliers – the United States, the United Kingdom and Canada – are also facing economic shocks.

In fact, Guyana could be among the region’s most affected countries due to the rapid fall in oil prices. Before the outbreak, The International Monetary Fund projected GDP growth of 86% for the country based on oil production starting in 2020, with the assumed oil price of $60 per barrel. But with spiraling trade prices, growth is predicted to be greatly diminished

As for fiscal, monetary and social policies, the report highlights key measures the six countries have been taking, ranging from tax instruments to targeted spending and financial relief for small enterprises. All the countries have already implemented the latter, along with targeted increases in social spending. They have also requested lower-cost financing from international financing institutions. The IDB is assisting its borrowing member countries mitigate the impact of the crisis by focusing on four key areas of lending and technical assistance.

To increase understanding of the pandemic’s many impacts on the region and how to navigate them, the IDB has organized a series of webinars, the first assessing the economic outlook and the second delving into how businesses can cope. Two points stand out: the importance of digital access and intra-regional economic strengthening.

Gaps in digital access and knowledge significantly limit how much the Caribbean can take advantage of the opportunities that the online world offers during the lockdown.

Turner-Jones rates the Caribbean at “barely a 5” on a scale of 1 to 10 in terms of readiness to operate in the virtual space. “We’re not nearly as ready as we ought to be, despite mobile-phone penetration throughout this region, which is quite high. A lot of these mobile devices aren’t smart devices and people don’t have access to data at home.”

Adapting will require not only focusing on closing gaps for the entire population, but also increasing countries' investment in e-government infrastructure, reinforcing digital governance and creating a legislative framework to accompany the changes.

“I think government needs to… perhaps realize that wi-fi should be a public good. It should be available to everybody,” says Allison Peart, among the webinar panelists, who manages an advisory firm specializing in taxation and business strategy. “It’s time for us to have efficient governments. When you start to innovate from the government, it will force the rest of us to get with it.”

James Scriven, the CEO of IDB Invest, the Bank’s private-sector arm, says one of the most challenging characteristics of the Caribbean is that its territories and populations are spread out – meaning technology is all the more needed to shrink those distances.

“To solve this, we have prioritized working with large and privately-owned telecommunication companies to improve connectivity and access to smart phones in the region,” he says.

As international supply chains wobble and tourism plunges, an alternative could come from the region itself. A large amount of untapped economic potential, in which online access could play a supportive role, means opportunity for much more intra-regional business.

“The largest single untapped source of business for Caribbean tourism is the Caribbean itself. If we were to begin to tap into the possibility of tourism from within the region, we would be much farther ahead”, says Vincent Vanderpool-Wallace, Principal Partner in an advisory company on travel and tourism and a former minister of tourism and aviation in the Bahamas.

“A crisis is a terrible thing to waste,” he says.

Could a more self-reliant, more digitized regional economy emerge from the wreckage of the pandemic?

To learn more about the economic impact of coronavirus in the Caribbean, read our Caribbean Quarterly Bulletins here and here.

To delve further into the impact on tourism in the region download our free publication.