Evaluating the IDB’s Climate Change Efforts in the Energy Sector

This sectorial study: Energy and Climate Change, evaluates the Inter-American Development Bank's actions in the sector and its implications for climate change, both in mitigating Greenhouse Gas (GHG) emissions as well as emerging activities to address climate vulnerabilities. The evaluation includes all the activities associated with the energy sector in Latin America and the Caribbean (LAC) except those related to its use in transport, which was reviewed in the Transportation Sector Study.

In the global context, LAC is one of the regions known to produce the lowest levels of GHG Emissions from the transformation and use of energy 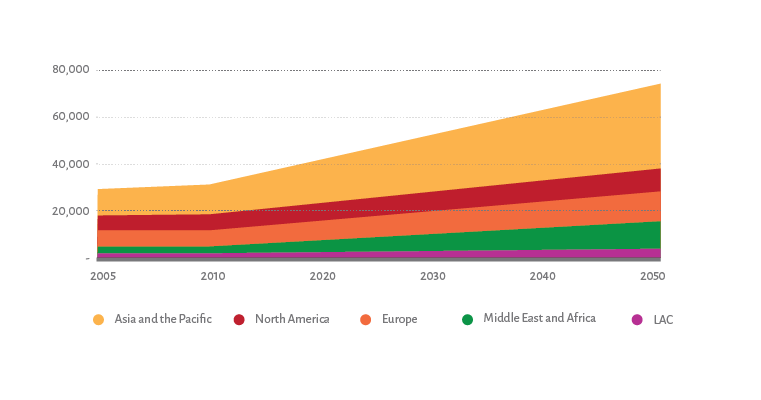 Levels of GHG Emissions in LAC represent 5% of global emissions in the energy sector. The Region made a long-term commitment to maintain current levels despite the challenge of increased energy demands from a growing economy and population. In order to maintain a low carbon energy sector, the Region will have to incorporate effective mitigation strategies through increased use of renewable energy and the promotion of energy efficiency and conservation. Simultaneously, in order to guarantee a reliable supply of energy, LAC will need to improve the identification and quantification of the sector vulnerabilities, and incorporate climate adaptation measures in the energy infrastructure.

Contributing to solutions to the global challenges resulting from climate change is one of the central pillars of the IDB, as outlined in the last agreement of the Ninth General Capital Increase (IDB-9). The Sustainable Energy and Climate Change Initiative (SECCI) launched in 2007, and the adoption of an Integrated Strategy for Climate Change Adaptation and Mitigation, and Sustainable and Renewable Energy – Climate Change Strategy – which was approved in 2011, are examples of this commitment. As part of the general climate change evaluation carried out by OVE in 2014, this sectorial study: Energy and Climate Change, evaluates the IDB’s actions in the sector and its implications for climate change, both in mitigating GHG emissions as well as emerging activities to address climate vulnerabilities. The evaluation includes all the activities associated with the energy sector except those related to its use in transport, which was reviewed in the Transportation Sector Study.

Since 2004, the IDB has progressively incorporated strategies to mitigate climate change in its energy portfolio, both in the public as well as in the private sector operations

Close to 80% of all projects financed by the IDB during the period 2004-2013 included (explicitly or implicitly) strategies for climate change mitigation. In contrast, adaptation strategies have received less attention. The total portfolio amount evaluated by the Office of Evaluation and Oversight (OVE) reached US$9 million, distributed between the public sector (55%) and the private sector (45%).

IDB interventions at the government level (public sector) were focused mainly on supporting institutional changes needed to overcome institutional and regulatory barriers to the introduction of climate change mitigation strategies; improvements in the efficiency of the electrical networks; and the rehabilitation and expansion of electricity generation, where hydroelectric power plants played a fundamental role.

The private sector portfolio greatly promoted the incorporation of new sources of renewable energy (primarily wind and solar). It also included compensatory actions for mitigation in projects generating energy from traditional sources (fossil fuels) and created a space for improved strategies in energy efficiency in consumption, despite the challenge of distortions in energy prices that exist in many countries in the Region.

During the evaluation period (2004-2013), the Bank financed 16% of the renewable energy generation in LAC (1.652 MW) through its private sector interventions. Excluding the projects in Brazil, the Bank’s contribution is even more significant, amounting to 58% of total investment in renewable energy in the Region, with wind energy occupying the biggest portion of the portfolio.

The Bank carried out an intensive activity to attract and channel resources for concessional lending, which, together with the Bank’s own funds, has allowed it to promote its climate change agenda in the Region

Over the last ten years, US$240 million (53% external funding) was approved to finance 173 non-reimbursable technical cooperation operations. These funds financed of a number of initiatives, including the development of knowledge products which helped to identify and propose solutions to technological and institutional barriers in the interrelation between the energy sector and climate change; strengthening the technical and institutional capacities of the Region; financing the preparation of projects; and ensuring the economic viability of relevant interventions through financial agreements that help to offset the incremental costs associated with the mitigation of emissions.

The most effective and clearly quantifiable reduction in GHG emissions achieved by the Bank was related to its operations in the rehabilitation or expansion of hydroelectric power plants, followed by the wind generation plants, and finally, through its GHG compensation measures resulting from a coal-powered electricity plant.

IDB projects were more successful when GHG mitigation was introduced in the context of a broader national objective, such as reducing dependence on imported fossil fuels, providing electricity to remote populations, or increasing energy security by diversifying the energy matrix of the countries. In this sense, the private sector intervention strategies that were most relevant were those that occurred in close cooperation with the public sector of the Bank. The depth of policy dialogue with country representatives enabled a shared objective among all the actors, increased the relevance and benefits derived from the operation and reduced institutional and regulatory risks.

There still exists a significant margin for improvement by the Bank in the quality, relevance and effectiveness of its interventions

On the basis of these findings, OVE makes the following suggestions:

1. Ensure that projects’ possible co-benefits in terms of climate change are identified and effectively incorporated in the energy sector portfolio, ensuring a clear identification of opportunities in each specific country. Improve the indicators that allow monitoring and evaluating the impacts of IDB operationson GHG emission reduction.

4. Take advantage of GHG mitigation opportunities in high-carbon projects where IDB participation can make a difference. Many LAC countries explicitly state in their energy strategies that they will continue to add installed capacity from fossil fuels. In this context, the Bank could play an important role in promoting cleaner fossil fuels such as natural gas. The Bank’s participation could also lead to the introduction of more efficient and cleaner fossil fuel technologies.

5. With regard to the private sector:

b. Increase the Bank’s relevance by further advancing the role of the Bank as an institution that structures projects and leads syndications.