This report aims to assess the IDB´s role in responding to climate change in the Caribbean over the period 2004-2013. It analyzes key vulnerabilities, threats and opportunities that the nine Caribbean countries—The Bahamas, Barbados, Belize, Dominican Republic, Guyana, Haiti, Jamaica, Suriname and Trinidad and Tobago—are facing, discusses the IDB strategy and de facto program to address them, and presents case studies of the Bank´s role in Barbados, Dominican Republic and Haiti.

Due to their size and location, Caribbean SIDS are particularly susceptible to the impacts of climate change. As developing economies relying on sectors vulnerable to climate patterns such as tourism, agriculture and fishing, Caribbean nations would be greatly affected by the ongoing rise in sea levels, changes in rain patterns and temperatures, and increasing intensity of natural disasters identified by the Intergovernmental Panel on Climate Change (IPCC).

Despite the many differences among Caribbean nations, climate change poses a serious threat to them all. According to the IPCC, average temperatures in the region have increased by 0.1° to 0.2°C per decade over the past three decades. Rainfall patterns have shifted in the region, with the number of consecutive dry days expected to increase. Additionally, sea level rise has occurred at a rate of about two to four cm per decade over the past 33 years, a trend which presents risks to the region’s freshwater resources and to its largely coastal population dependent on tourism and agriculture.

In terms of addressing the threat of climate change to the Caribbean, the cost of inaction is high. Projections indicate that losses could total US$22 billion annually by 2050. That figure represents roughly 10% of the current Caribbean economy. In addition, climate change resources could help the region reduce its dependence on fossil fuels and exposure to their price variability, with gains for climate change mitigation.

According to United Nations, SIDS are defined as islands and low-lying coastal countries sharing similar challenges to sustainable development.

In particular, by combining different instruments to advance key policies and promote resilience to climate change impacts—while moving toward low-carbon economies—the IDB’s program has been strategic and innovative in a few countries (Barbados, Dominican Republic, Guyana, and Trinidad and Tobago). In terms of mitigation, the IDB’s value added in the Caribbean has involved supporting meaningful policy reforms to promote renewable energy and energy efficiency measures through policy-based lending, while in adaptation it has promoted an integrated approach to coastal zone management (CZM) combining physical infrastructure investments with knowledge generation. The IDB did not have a regional strategy to guide climate change-related support in Caribbean SIDS. Instead, individual country strategies have been the main vehicle to address these challenges, which translated into uneven priorities across the region. 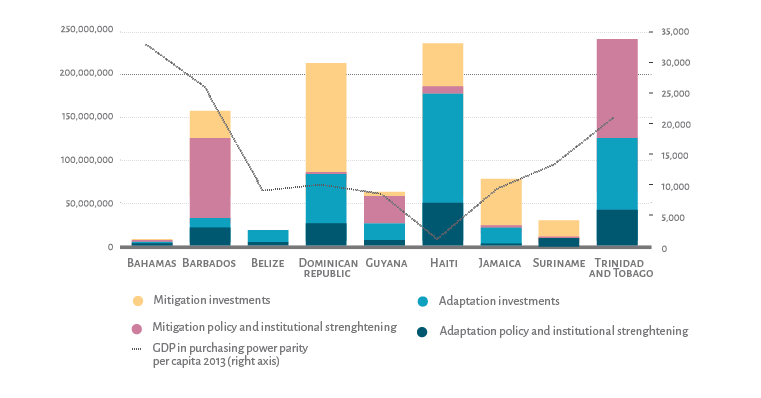 The Caribbean SIDS portfolio was distributed quite evenly between adaptation and mitigation, in contrast to other regions’ portfolios, where mitigation has received greater attention. Of the US$488 million approved in adaptation, 31% was targeted at drafting policies and legislation, institutional strengthening, and research, and 69% to investments in protective infrastructure works and ex-post recovery actions. Of the US$548 million used for mitigation, the Bank has committed almost as much to mitigation policy (47%) as to mitigation investments—53% was for rehabilitation works in energy and transport, pilot energy efficiency measures, renewable and waste-to-energy projects, and funding mechanisms to support sustainable energy projects.

With almost US$700 million disbursed over the period, climate change loans and grants represented 11% of the overall Caribbean portfolio between 2004 and 2013 by value and 25.4% by number of operations. In terms of sectors, sustainable energy was the main area of Bank support (40% of the climate change portfolio), followed by agriculture and forestry (26%), and disaster risk management and coastal zone management (17%). The lion´s share of the portfolio in value terms (66%) has focused on three countries: Trinidad and Tobago, Haiti, and Dominican Republic. 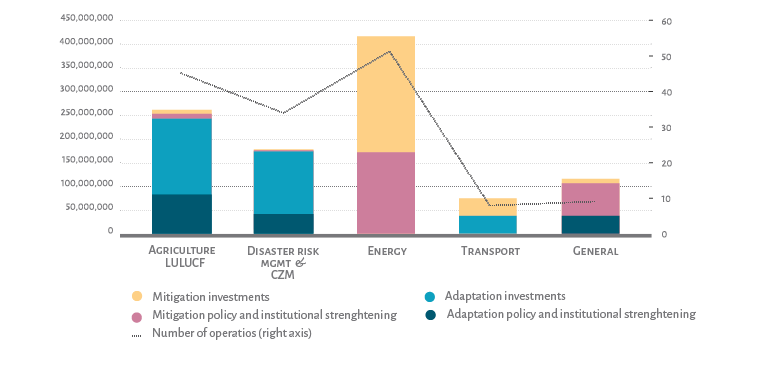 In order to better understand the impact of climate change on the region, OVE carried out in-depth evaluations in three countries: Haiti, the Dominican Republic and Barbados.

Barbados. With sandy beaches, fringing reefs, and a rich coastal ecosystem that attracts more than 1.1 million visitors per year, tourism is central to the economy of Barbados. Tourism accounts indirectly for 39% of the country’s GDP and employs 38% of the labor force. In addition, more than 50% of Barbadians live on or near the coast, and 95% of tourism-related plants and other critical infrastructures are also concentrated in these areas. As a result, climate change and sea-level rise would greatly impair Barbados’ economic development. The IDB and the country have worked together for more than 30 years on coastal zone management. IDB support has been strategically and financially relevant, by strengthening institutional capacities to analyze and plan for the impacts of sea-level rise, coastal erosion and saline intrusion, and by promoting important engineering works including offshore breakwaters, groins, beach nourishment and walkways. For instance, IDB has supported the Holetown beach improvement project and the Rockley to Coconut Court waterfront improvement project, which created 4.5 km of continuous safe beach access and increased beach volume by 16,000 m³. Although the long-term sustainability of such investments have been questioned, given high maintenance costs, the medium-term environmental and economic benefits are significant.

Dominican Republic. The Dominican Republic (DR), the third-largest Caribbean country in terms of population and the second-largest in terms of area, is highly exposed to major risks from extreme natural phenomena. According to the UN Office for Disaster Risk Reduction, DR experienced on average 1.6 natural disasters per year between 1980 and 2010, which affected more than 87,700 people and generated economic losses totaling US$84.1 million annually. Climate change, including increased intensity of hurricanes and of storm surges, would only worsen this situation. Since the mid-2000’s, IDB has taken a more comprehensive stance on Disaster Risk Management by assessing the risk, the need for prevention efforts, and the response to natural disasters in the nation. Furthermore, the Bank designed a toolkit that includes reserve funds, fast-disbursing contingency credit lines and sovereign insurance facilities to enhance financial protection and preparedness. Notwithstanding, implementation has been hindered by a lack of appropriation at the highest political level that could jeopardize the achievement of relevant results in case of severe extreme weather events.

Haiti. Haiti is among the countries most vulnerable to the effects of climate change due to a combination of factors ranging from its geographic location, deforestation and land degradation to high poverty rates, weak institutional capacity, and unstable governments. In this context, the IDB has been supporting adaptation-related measures in Haiti´s agriculture sector for decades. In more recent operations, the objectives have shifted from infrastructure in specific rural areas to more integrated agriculture programs combining disaster risk and watershed management. Assessing the effectiveness of the portfolio is constrained, however, by slow project execution—further aggravated by the 2010 earthquake—and therefore limited results have been gauged. Nonetheless, the Bank has recently made efforts to improve execution by using policy-based grants strengthening the agricultural institutional framework while promoting sustainable land use.

In light of the findings of this analysis, OVE suggests the following:

1.Promote a Bank regional strategy to address climate change challenges in the Caribbean and to guide countries in accessing global climate finance, sustained by the use of regional instruments to strengthen climate and economic modeling capacities.

2.Adopt an adaptation measure to quantify or qualify the (positive or negative) impacts of Bank operations on their ability to support resilience to climate change in the Caribbean.

3.Strengthen IDB’s classification of climate-related operations to develop a clear understanding of IDB support to the Caribbean—especially in adaptation.

5. Continue to explore the use of market-based solutions (such as insurance schemes) to hedge against the risks of climate-related damages and as a reponse to extreme weather events.