The frequency of natural disasters, such as floods, droughts, hurricanes, and earthquakes, is increasing in Latin America and the Caribbean (LAC) as well as in the rest of the world. This report evaluates the involvement of the IDB in disaster risk management as it relates to climate change in LAC.

The frequency of natural disasters, such as floods, droughts, hurricanes, and earthquakes, is increasing in Latin America and the Caribbean (LAC) as well as in the rest of the world. During the 1960s and 1970s, fewer than 20 disasters occurred per year. During the 2000s the average increased to 50 disasters per year. Although natural disasters are becoming less deadly, they are becoming more costly in terms of total damages. 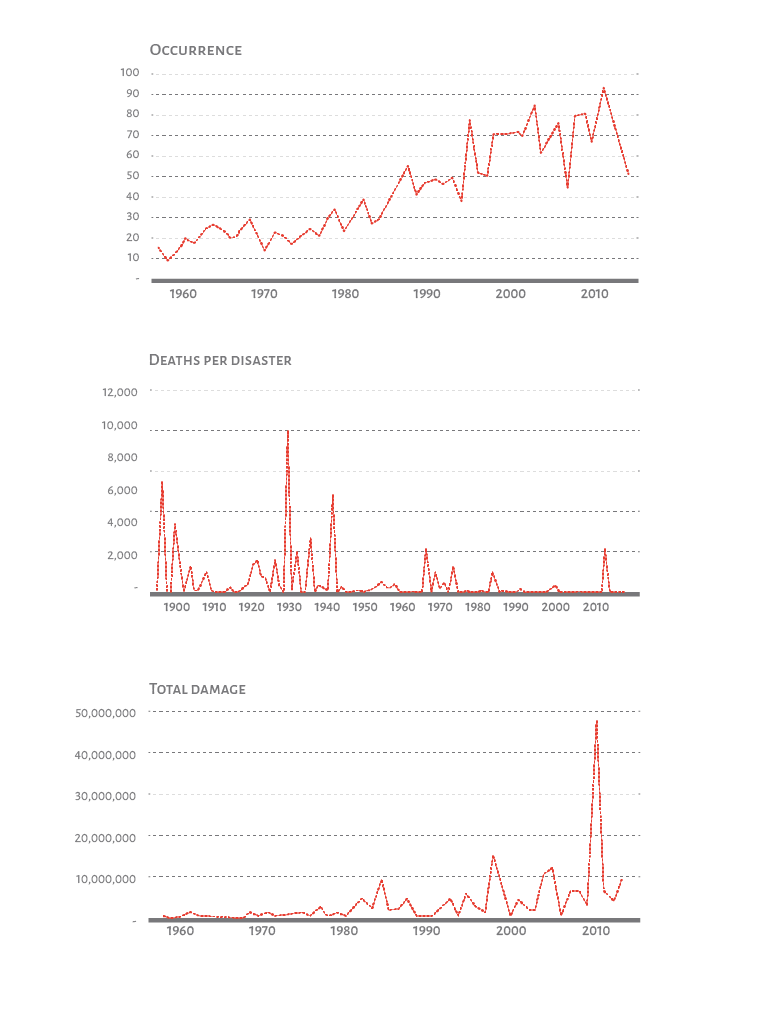 The link between climate change and increased disaster risk has not yet been scientifically proven; while it is true that global temperatures are increasing, it is unclear how big a role this change plays in the frequency or magnitude of disasters. Yet, global warming might increase the risk of drought, and higher ocean temperatures might also increase the frequency and intensity of storms. Disasters associated with these storms are more common because of the population increase and the resulting impact on the environment and an already fragile ecosystem.

Vulnerability is not evenly distributed across the Region

Social, environmental and economic factors play a key role in the Region’s vulnerability to natural disasters. Vulnerability takes into account exposure to natural hazards, sensibility – degree to which a system can be affected by a natural hazard – and adaptive capacity. In LAC, more than 75% of the population lives in cities. This urbanization can contribute to the occurrence of natural disasters, especially when it degrades the natural environment or burdens already stretched city infrastructures. Poor people are at the most risk of being affected by natural disasters for two reasons: they tend to live in hazard-prone areas and are unlikely to be insured or to have other means of financially recovering after a disaster.

Countries most at risk are those bordering the Caribbean and Pacific Ocean. Landlocked and Atlantic coast countries have lower relative vulnerability. 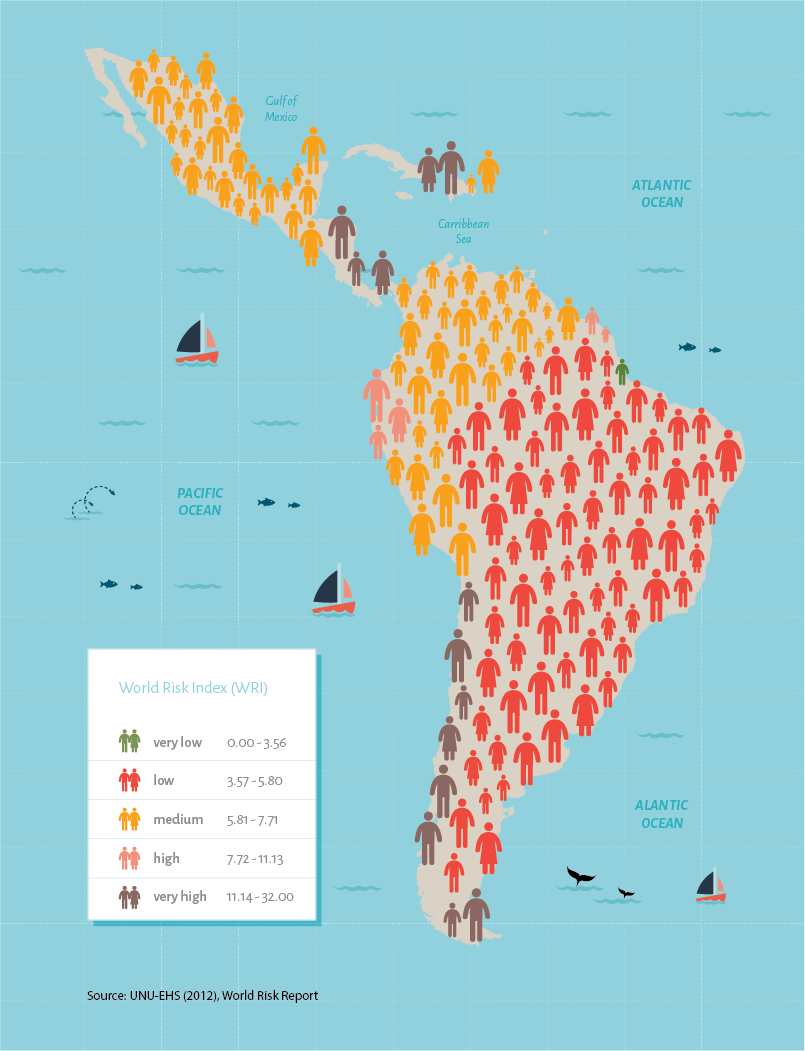 Disaster risk management in the Region has improved, but it still faces significant challenges

There have been some improvements in disaster risk management (DRM) in LAC, particularly in terms of building preparedness and improving emergency response. However, the Region still faces significant challenges in terms of preventing disasters (risk assessment) and addressing the underlying risk factors for disasters such as poor urban planning, aging infrastructure, and unsustainable environmental practices.

The IDB’s DRM Strategy has become more structured over time

In 2007, the IDB developed the DRM Policy to improve the institutional and policy framework of the Bank to support DRM and to improve the effectiveness of the Bank’s assistance. The conceptual relationship between DRM and climate change appeared for the first time in 2010, where prevention of natural disasters is identified as a component under the umbrella of Climate Change Adaptation. In recent years, the IDB approved some innovative initiatives to better integrate DRM and climate change adaptation.

From 2004 to 2013 the IDB approved US$976.3 million for DRM projects through 142 operations. The Bank has used several financial instruments to identify, prevent or mitigate risks associated with natural disasters. DRM lending has increased since 2010, with a portfolio focused mostly in pre-disaster support (risk assessment, prevention, preparedness). Post-disaster support (response, rehabilitation) was provided mainly through grants.

A focus on prevention defines three quarters of the IDB's portfolio in approved amounts. However, its effectiveness in promoting policy reforms has been limited. The government’s institutional capacity and financial support is the key to effective implementation and sustainability of regulatory changes and institutional reforms.

Risk assessment and preparedness activities have been developed mainly through small grants for studies, institutional strengthening and project preparation. They present innovative designs and high value added, especially at the subnational level, although few evaluative tools exist to measure quality and effectiveness. While the IDB has shown some ability to penetrate beyond the national level to support sub-nationals – where training and capacity building are most needed – a lack of local financial resources makes the sustainability of these plans a challenge.

Finally, the Bank adds value in terms of quick response to an emergency, as the operations are effective within just a few weeks or months. However, sustainability of infrastructure (mainly roads) and other activities related to response programs strongly depends on the government’s institutional and financial capacity.

OVE has made the following suggestions to improve the IDB’s work in DRM:

3.Focus on institutional capacity-building activities both at the national and subnational levels, helping governments address DRM and climate change adaptation. 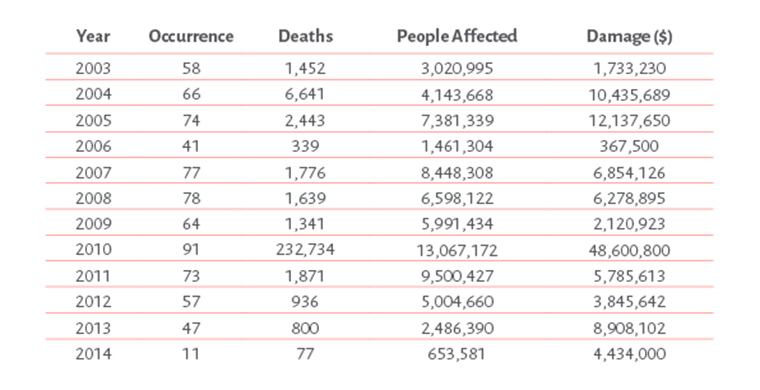