Mexico City – Today, the Inter-American Development Bank (IDB) presented the results of a research study that its Institute for the Integration of Latin America and the Caribbean (INTAL) carried out in partnership with Latinobarómetro. The study, “Techno-Integration in Latin America: Institutions, Exponential Trade, and Equality in the Era of Algorithms,” is implemented every year to measure Latin Americans’ perception of different issues.

Between July and September 2017, more than 20,000 citizens in 18 countries in the region were interviewed regarding their opinions on political and economic integration, new technologies, social equality, and the environment.

The main findings for each of these areas are as follows:

· 77 percent of the population favor their country integrating economically with other countries in the region and 62 percent support their country doing so politically.

· 77 percent of Latin Americans favor free trade in goods and services with other countries in the region. MERCOSUR countries show greater support for free trade on average (80 percent).

· The United States is the country that interviewees most frequently cite as the one with which the region should increase trade and political relations (34 percent), followed by the European Union (16 percent), and China (13 percent).

· Approximately nine in ten Latin Americans favor workers being able to work freely in any country.

· 78 percent believe that globalization is an opportunity for economic growth.

· Social inclusion and poverty were Latin Americans’ main concerns on the development agenda.

· Nearly 80 percent believe that income inequality in their country is unjust.

· 44 percent believe that society would be better if it was made up of people of the same nationality.

New technologies and the environment:

· Approximately four out of every five Latin Americans think that science and technology are threats to employment. There is considerable resistance to artificial intelligence and robotics—only 24 percent of people trust that these technologies will create more employment than they displace.

· 88 percent believed that knowing how to use the internet is essential to being able to function in today’s world and 77 percent think that universal internet access is a top priority, even more so than basic infrastructure such as highways.

· However, just two out of every ten respondents would be willing to travel in a vehicle driven by a robot or operated remotely.

· Internet and social network users express the greatest support for regional integration and are the most concerned by environmental problems and climate change.

· The environment and climate change were the second priority for all respondents.

· Approximately seven out of every ten Latin Americans think that climate change needs to be addressed even if this has a negative effect on economic growth.

The partnership between INTAL and Latinobarómetro was created three years ago as part of the IDB’s Regional Public Goods (RPGs) program. Through this publication, INTAL, which is part of the IDB’s Integration and Trade Sector, is contributing to building a regional agenda which seeks to create forms of consensus to achieve more egalitarian, sustainable development.

The IDB’s mission is to improve lives. Founded in 1959, the IDB is one of the leading sources of financing for economic, social, and institutional development in Latin America and the Caribbean. The IDB also undertakes cutting-edge research projects and provides consultancy services on policies, technical assistance, and training to public and private clients throughout the region. 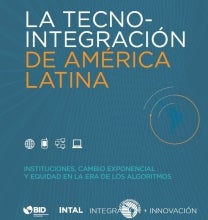