MENDOZA, Argentina—The Inter-American Development Bank (IDB) and the Government of Japan have expanded their longstanding partnership through a joint pledge to support public-private partnerships (PPPs) in Latin America and the Caribbean. The agreement includes a commitment by the Japanese government to transfer $5 million to the Bank’s Contingent Recovery PPP Preparation Program.

In line with the shared focus of Japan and the IDB on quality infrastructure investment, the funds will be managed by a newly created PPP-focused unit at the Bank, which is increasing the focus on partnerships as an efficient and effective means of filling the region’s infrastructure financing gap. The new funding will support public sector projects through the IDB, as well as private sector projects through the IDB’s private sector arm IDB Invest.

The agreement was signed at the Annual Meeting of the Boards of Governors of the IDB and IDB Invest by IDB Vice President for Countries Alexandre da Rosa and by the Japanese Executive Director Toshiyuki Yasui, on behalf of the Ministry of Finance. It builds upon and complements the IDB and Japan’s long track record of partnering through such platforms as the Co-financing for Renewable Energy and Energy Efficiency (CORE) program and the Japan Quality Infrastructure Initiative (JQI).

The shared focus of the IDB and Japan on quality infrastructure and on expanding their joint efforts in the region was highlighted in the joint statement released in Tokyo in 2016 by IDB President Luis Alberto Moreno and Japanese Deputy Prime Minister Taro Aso upon the occasion of the 40th anniversary of Japan’s membership in the IDB.

About the Inter-American Development Bank (IDB) 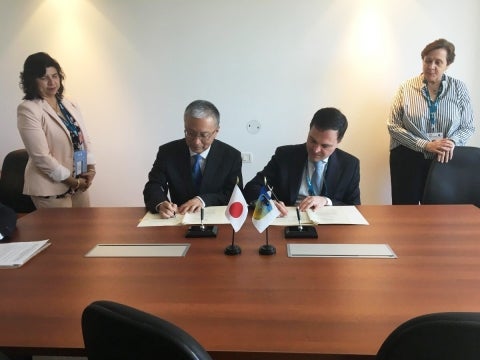