Demand Solutions heard the experiences of four talented visionaries and of 13 Latin American speakers who shared their views on how they are improving lives in their countries with domestic and international entrepreneurs, public and private sector representatives, artists, creatives, undergraduate students, and IDB and IDB Invest representatives who flew into Mendoza for the two institutions’ Annual Meeting.

These 17 talents – including creatives, ministers, filmmakers, entrepreneurs and artists from Argentina, Paraguay, Mexico, Colombia, Ecuador, Venezuela, Uruguay, Panama, Spain, United States and the United Kingdom – were introduced by IDB President Luis Alberto Moreno, who underscored the dramatic progress in Latin America and the Caribbean and called on the audience to continue to work together to promote growth in the region.

In his presentation, Moreno pointed to a paradox: Latin Americans tend to perceive their past under a better light than their present, against all the factual evidence showing that the region has made major development strides.

All that headway “is the fruit of decisions and efforts made by millions of people making small, nearly imperceptible contributions to the common good,” Moreno said.

“They, in my view, are the real heroes and heroines of development.”

The visionaries and experts inspired a 1,000-plus-strong audience with their thought-provoking presentations and lectures on the imperatives for the creation of sustainable cities, such as mobility, city resilience to climate change, creative cities, and employment.

In the segment of sustainable mobility, Gustavo Riart, a young Paraguayan entrepreneur, talked about how he designed technologically advanced bus stops that are unique in the world. He was followed by a panel of experts that included Darío Hidalgo, a regional expert from Colombia who has worked on major urban transformation and public transportation success cases; María Fernanda Pacheco, an Ecuadoran expert, shared her knowledge about the implementation of a text-message-based alert system against sexual abuse on buses; and Argentina’s Transportation Minister Guillermo Dietrich presented his views on how to continue fostering innovation in the public transport sector.

The urban resilience segment began with David Rosenberg, an American visionary who founded AeroFarms, a vertical, urban agriculture solution pointing to the future of agriculture. The segment’s experts panel included Belinda Tanto, a Spanish architect and founder of Ecosistema Urbano, who shared with the audience her expertise on combining nature and technology to lower the temperature in public space designs. Alfredo Ramírez, a Mexican architect, provided examples of how landscapes have the potential to intervene urban spaces to improve the social environment. And Panama City’s Deputy Mayor Raisa Banfield invited the audience to reflect upon the importance of having more trees and less concrete in urban areas.

The segment on the future of work began with Uruguay’s Nicolás Jodal, one of the region’s most prominent technological entrepreneurs, who shared his views on the impact of new technologies in the future of work and called on his listeners to reflect upon the importance of “learning to learn and learning while doing.” His address was followed by a panel of experts that included Silvina Moschini, an Argentine entrepreneur and regular contributor to CNN en Español on technology issues, who explained how the cloud puts the power of technology at the service of workers. Paraguayan engineer Gloria Ortega told the audience how she is leading the gender inclusion process in the world of technology. And Argentine entrepreneur Mariano Tamburrino, founder of Solapa 4 (S4), the fastest growing agrotechnology firm in the country, discussed how S4 uses digital platforms to make agricultural processes more efficient.

The creative districts segment began with a presentation by British visionary Charles Landry on creative cities around the world. He was followed by a panel that included Paula Silva, a Colombian who heads the British Council’s Art Program and who spoke about ways to empower creative entrepreneurs. Erin Baumgartner, from the U.S., told the audience how the MIT SENSEable City Lab uses digital technology and data to design the cities of the future that are specifically conceived for their inhabitants. And Argentina’s Luis Bruno, Dean of the Faculty of Architecture, Design, and Urban Development of the University of Buenos Aires, urged participants to help their governments and the private sector to promote creative districts.

The last discussion session was an interview with Juan Campanella, an Oscar-winning Argentine scriptwriter and filmmaker who talked about how the audiovisual industry helps a country’s economy.

Demand Solutions concluded with an award ceremony for IDB Urban Lab, a college contest that seeks to find creative solutions and innovative ideas for the urban problems of Latin America and the Caribbean.

The Inter-American Development Bank is devoted to improving lives. Established in 1959, the IDB is a leading source of long-term financing for economic, social and institutional development in Latin America and the Caribbean. In addition to loans, grants, and credit guarantees, the IDB also conducts cutting-edge research and provides policy advice, technical assistance and training to public and private sector clients throughout the region. 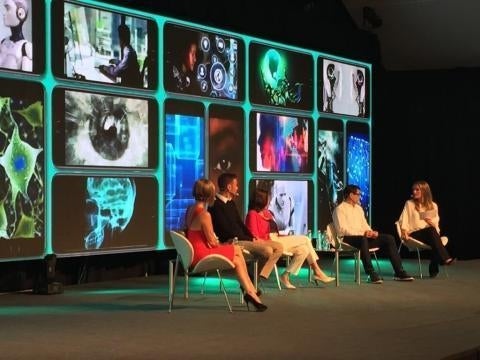