MENDOZA, Argentina – The III Business Forum opened today with the participation of nearly 900 business leaders and government officials from 30 countries, who convened to discuss an ambitious agenda focused on boosting investments in infrastructure, promoting regional economies, and speeding up regional integration in Latin America and the Caribbean.

The forum, which is part of the Americas Business Dialogue, a public-private platform created to foster business links in the Western Hemisphere, took place in this Argentine city a day ahead of the annual meeting of the Boards of Governors of the Inter-American Bank and IDB Invest, its private sector arm.

In his opening remarks, Moreno said this forum would help shape a series of proposals that will be presented to the heads of state and government attending the Summit of the Americas, scheduled to take place next month in Lima, Peru.

“For example, we will discuss the urgency of boosting investment in infrastructure in sectors such as transportation and energy, the advantages of promoting local economies and the importance of going forward with regional integration,” Moreno said.

Senior executives from Walmart, Centro Logístico-México, Belatrix-Mendoza (software), Danper-Perú (agroindustry), and Café Los Santos-Costa Rica, discussed how local economies can gain access to international markets and integrate into value chains so as to boost their contribution to their countries’ development.

Latin America and the Caribbean need to invest about 5 percent of GDP annually over the next 20 years if it is to close its infrastructure investment gap, lower its transportation costs and gain competitiveness in the global market.

Public-Private Partnerships (PPP) are crucial to leverage more resources and close this gap.  Between 2006 and 2015, the region received more than $360 billion worth of investments for more than 1,000 infrastructure projects through PPPs.

The Business Forum “Smart Integration with the world: promoting domestic economies and investment in infrastructure” was organized by the IDB as part of the Americas Business Dialogue (ABD), a private sector-driven initiative aimed at fostering a high-level public-private policy dialogue among business and government leaders. Over the years, the ABD has produced a set of recommendations on key sectors for the region’s economic growth and development.

Businessmen attending the Forum will hold bilateral meetings with several finance ministers to discuss progress on these recommendations, which will be presented at the Summit of the Americas in Lima, Peru. 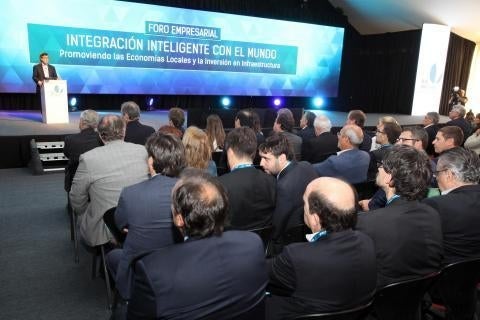