Argentina will seek to attract private investment in infrastructure with a $500 million investment guarantee facility from the Inter-American Development Bank (IDB). The approval of the Program to Support Productive Infrastructure Financing in the country was announced at a signing ceremony conducted by Argentina’s Finance Minister Luis Andrés Caputo and IDB President Luis Alberto Moreno on the sidelines of the IDB Annual Meeting in Mendoza.

Argentina has huge infrastructure investment needs. The government has expressed interest in developing projects for a total $69 billion through 2025, which would require private investments of approximately $30 billion. To achieve this goal, the government has launched a number of reforms to promote public-private partnerships, a framework within which private investors can participate in infrastructure projects.

With this program’s approval, the IDB puts at the disposal of the market its guarantee –which has a AAA rating, the highest possible credit rating– to support Argentina’s efforts to attract domestic and international private investors interested in financing infrastructure projects through public-private partnerships.

The program consists of a Flexible Risk Mitigation Facility under which the IDB will issue partial risk guarantees and political risk guarantees to financiers and investors taking part in public-private partnership projects in Argentina who meet the program’s requirements, thereby mitigating public management related risks.

“This project represents a new financing paradigm for the IDB in Argentina and other countries in the region,” said José Luis Lupo, IDB Representative in the country. “The program reflects our confidence in the country’s efforts to achieve economic stability. The IDB guarantees will provide reassurances to investors and allow Argentina to leverage more private resources to invest in productive infrastructure.”

The program adds to the government efforts to implement an agenda of structural reforms aimed at strengthening productivity, international trade, and the country’s reinsertion into the international financial markets to promote mid- and long-term growth.

The Flexible Risk Mitigation Facility will be made available to underwrite domestic and international financial institutions’ loans and negotiable instruments issued in the capital markets. The guarantees can be issued for up to 25 years and will be used to support road corridors, energy transmission and renewable energy projects. The project will be executed by Argentina’s Finance Ministry. 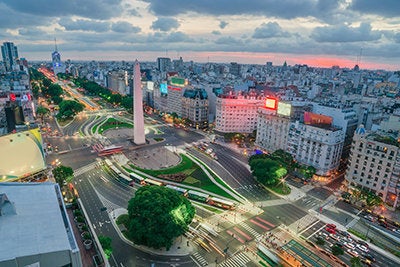