An X-ray of Latin American creativity

Since she was a child, Laia Barboza grew up surrounded by consoles such as Nintendo and Ataris in Maldonado, a city 130 kilometers east of Montevideo, the capital of Uruguay. After hours of playing along her friends, Laia began to experiment little by little with technology until, finally, she ended up on the other side of the screen: she went from being a player to a video game creator.

It all started when Laia was encouraged to create the soundtrack for a video game developed by two of her friends, Juan Manuel Pereyra and Pablo Pizzani. "We realized that the three of us made a very nice team and that the work between the three of us was very natural," says Laia. "That's when we realized we had to jump in."

After this, Laia, Juan Manuel and Pablo founded Pincer Games—a video game developing company created in 2014, which now has two titles of its own. Pincer Games is today one of the most important video game developers in Uruguay, the country that exports the largest amount of video games in Latin America, generating an industry valued in more than 600 million dollars.

Laia was one of the 53 entrepreneurs we interviewed to learn more about the people behind the region’s creative potential. The study also included the imput from approximately 250 individuals through an online survey, all of them coming from different innovative companies in Latin America and the Caribbean. The result was a true radiography of the entrepreneurs of the region, published on Launching an Orange Future: Fifteen Questions for Getting to Know the Creative Entrepreneurs of Latin America and the Caribbean.

In general, the region can do so much better. While some governments have promoted policies to encourage the development of start-ups and entrepreneurships, only 1,77% of the world's exports of creative goods come from Latin America and the Caribbean. However, the impact of the Orange Economy is absolutely measurable at the city level: according to the Observatory of Creative Industries of Buenos Aires, this industry contributes 9,2% of the gross domestic product of the Argentine capital.

Despite the disparity between cities and countries, the contribution of the Orange Economy in the region is undeniable. In fact, it is estimated that the creative and cultural industries were responsible for the creation of 1,9 million jobs in Latin America and the Caribbean during 2015—comparable to those generated by the economies of Uruguay or Costa Rica. 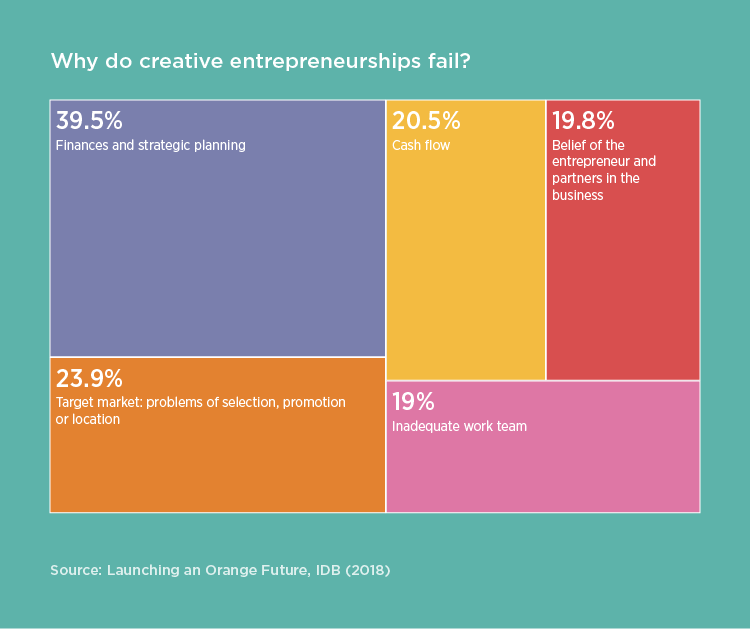 There is no established recipe. But the key to becoming an entrepreneur is to find resources, copy successful practices, read, go inside. Be curious. This is why public policies that encourage the incubation of enterprises are essential to boost these creative industries. Laia and her Pincer Games partners were part of a Uruguayan incubator, which was boosted by the support of the National Agency for Innovation and Research and resources from other institutions.

Today, Laia is the economic head of the company. She is the one who keeps the accounting in rule, makes business development plans, meets with potential financiers and ensures that the operation yields positive numbers. "This is much more than programming or designing a game. It has to do with running a business, with raising funds, with doing business development, getting contacts, traveling. And sometimes it's very difficult to do all those things when you're doing a game," says Laia. "My job is that Juan Manuel and Pablo can develop and code the game without getting distracted by other things."

But learning how to run a business is not easy: 29,9% of entrepreneurs in the region learn through 'trial and error'. Similarly, 24% identify themselves as self-taught, while only 13,8% had some type of professional education.

Almost half (48.9%) of Latin American and Caribbean entrepreneurs start their business with their own funds. Savings, in this case, are fundamental. These are followed by contributions from family and friends; while private banking could still play a more pivotal role, according to the study. Only 4,1% of the ventures are financed through a bank loan.

“This is much more than programming or designing a game. It has to do with running a business, with raising funds, with doing business development, getting contacts, traveling. And sometimes it's very difficult to do all those things when you're doing a game.”

Beyond the economic challenges, Laia also had to face another obstacle: venturing in an industry dominated by men. According to our publication, there is only one woman for every 4,5 men who develop software and video games.

"Many times I have had moments where I’ve felt stuck in the business just for being a woman," she says. "I have been advised that one of my male partners should continue negotiating with the counterpart, because the deal might stall for having a woman leading the conversation."

But this has not only happened to Laia. This is a widespread challenge women have to face inside the industry. "It has also happened to other colleagues. Those are moments in which we feel marginalized, just for the fact of being a woman."

The study also evidenced the gender-related inequalities that exist within this sector, not only in terms of participation, but also from an economic point of view. In Latin America and the Caribbean, the Orange Economy is an industry dominated by men: the proportion is 62% for males, and only 38% for females. In addition, only three out of ten women said their entrepreneurships yield money enough to support themselves, while among men this number rises to almost five out of ten. 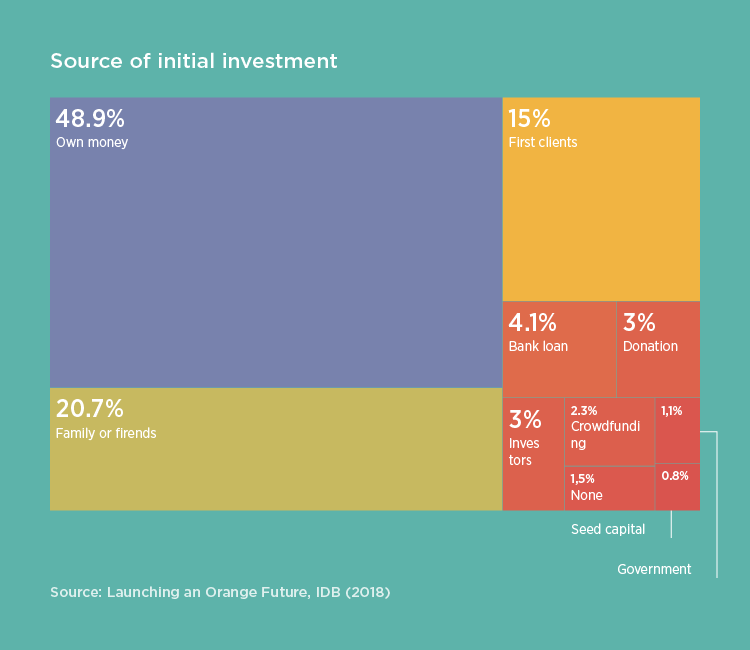 Laia's most difficult decision was to leave her comfort zone. "It was realizing that now everything is up to you, and that entrepreneuring is a risk. A nice risk, though, but a risk at the end anyways," she says.

For her, the most important thing for those who wish to become entrepreneurs is to research the institutions supporting the creative industries in the region. "That is going to make a difference in whether something can be incubated or not," she says. Similarly, the administrative aspect—such as making a business plan, creating contact networks, or finding financing alternatives—is fundamental to achieving success, even beyond the technical component of every entrepreneurship.

"It's all about being constant. That you are not going to be successful overnight", Laia says. "You have to know you’ll have good and bad times, but that you have to keep going. You have to lose your fear. That is the formula."