The world’s most ethical and sustainable shrimp comes from Belize

The global shrimp industry is plagued with problems. In 2016, the United States Department of State published a report indicating the widespread use of forced labor -including minors- in the fisheries of 47 countries, many of them in Latin America and the Caribbean.

Shrimp production can also cause large environmental damage. The Food and Agriculture Organization of the United Nations (FAO) estimates that around the world, 87% of wild fish and shellfish populations are fully exploited, overexploited or depleted. Its most sustainable alternative are aquaculture farms, which when not properly managed release massive amounts of pollutants such as salt, antibiotics and biological waste that devastate the surrounding habitats. In particular, it is estimated that since 1980 a total of 1.5 million hectares of mangroves have been lost due to shrimp farms.

Despite this, shrimp farming has rapidly grown. The FAO estimates that between 2000 and 2015 shrimp farms went from producing 1 million tons a year to 5 million tons globally, and output is expected to grow at a compound annual rate of 5.7% over the next decade. 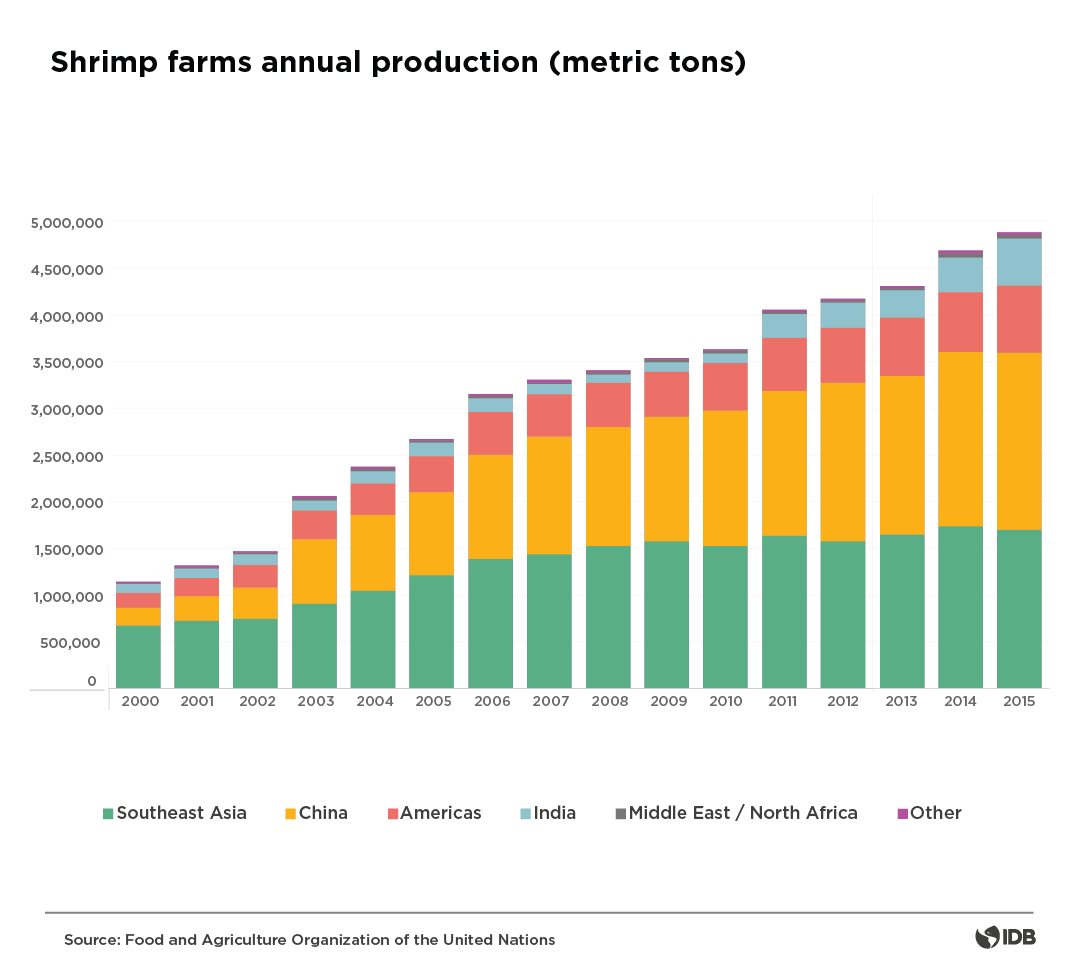 Faced with this scenario, in 2010 the World Wildlife Fund convened several organizations from around the world to brainstorm a solution. The main conclusion they reached was that nothing was going to change as long as consumers could not distinguish shrimp raised in harmful ways from those raised in an ethical and environmentally responsible manner. So over three years they worked to create a set of social and environmental standards to which responsible shrimp companies can adhere and obtain a certificate to show to their customers.

In 2013, the working group launched the “Aquaculture Stewardship Certification” (ASC), which distinguishes those companies that preserve the environment through proper use of water, protecting biodiversity in the areas where they operate. It also requires aquaculturists to use natural resources responsibly, reduce the excessive use of chemicals and antibiotics, and adhere to high standards of social responsibility that include the exclusion of child labor, paying fair wages, and achieving a positive impact on local communities. The ASC requirements  are so strict that no more than 20% of farms worldwide would be able to meet the standards.

In such a context Belize decided to take the lead in producing socially and environmentally responsible shrimp. Over the years, its shrimp companies had created a high quality industry that catered mainly to the export market. Their main client was neighboring Mexico, who buys shrimp at one of the best prices internationally. 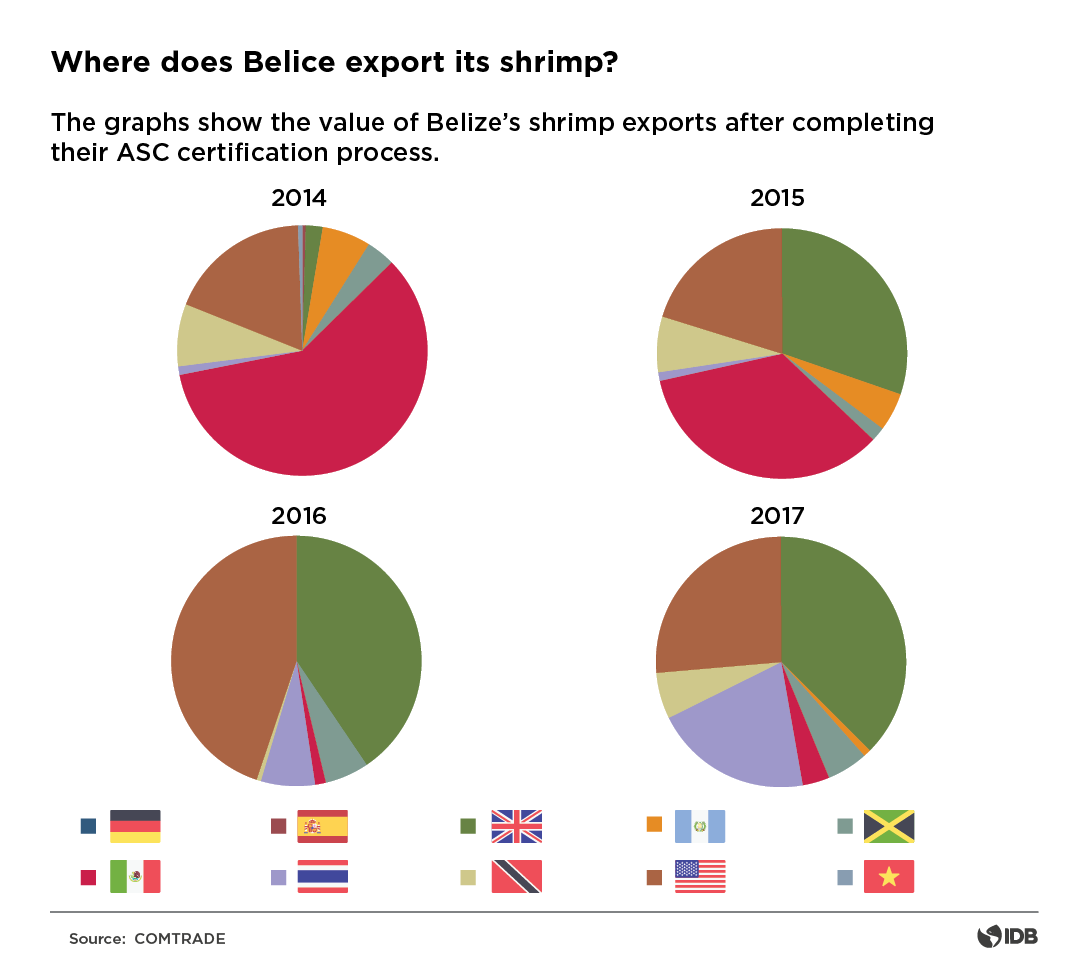 But they had a much bigger dream. The Belize Shrimp Growers Association  - an organization that includes the majority of shrimp farms in the country -  had the vision of becoming an industry leader and producing the best shrimp in the world. To achieve this goal, they requested technical support from Compete Caribbean, a program that supports private sector development and innovation in the Caribbean,  operating with funding from the Inter-American Development Bank, the UK Department for International Development, the Caribbean Development Bank and the Government of Canada. The initial objective was to certify six of the 10 existing farms with the ASC; however, they were much more effective and by 2015, 90% of the country's shrimp farms had been certified, making Belize the first country in the world where almost all shrimp produced is socially and environmentally sourced.

The measure had immediate effects. As soon as the Belize shrimp farms obtained the certification, several British supermarkets, including Marks & Spencer and Sainsbury’s , pledged to buy exclusively their shrimp  under a premium sales stamp. In 2014, exports reached US$ 45 million and came to represent 5.6% of the country's GDP.

"Prior to this project, these niche markets in Europe, the United States and Canada would have been inaccessible," says Alvin Henderson, president of the Belize Shrimp Growers Association. “The fact that orders came from as far away as Belgium did not surprise us. With the certification we expected that the European market, especially the British one, would look for our product. We were right,” he says.

Part of the success of the initiative was that it fostered a culture of collaboration and community among the different shrimp farms. By working together to certify all members of the association, they created a positive dynamic of sharing knowledge and resources. This was very useful in 2015, when the industry faced a major crisis. Shortly after certification, a virus that expanded from a neighboring country devastated the shrimp population. In total, 41% of production was lost, compared to 2014 levels; some farms lost all their shrimp. But thanks to social cohesion and solidarity, they had the capacity for a rapid response that allowed them to cope with the changes.

“Before working with Compete Caribbean there was a shrimp association, but the producers didn’t work together on any projects,” says Sylvia Dohnert, Director of the Compete Caribbean facility and lead specialist with the Competitiveness, Technology and Innovation Division of the IDB. “After the certification project, the response to the virus crisis was much faster because they were used to working together. They were able to coordinate and work quickly to contain the infection, something that would not have happened before,” she says.

Today, eight shrimp farms have been certified by the ASC and three others are in the process of certification. In addition, to avoid future problems with other infections, the Belize Shrimp Growers Association again requested support from Compete Caribbean to create a Protocol of Biosafety in Aquaculture. This protocol uses geographic information systems and digital monitoring technologies to quickly identify and respond to risks to shrimp production arising from viruses, sharp variations  in temperature or current changes due to climate crisis. With this new system, Belize will become the first nation in the world to implement a biosafety protocol that covers the entire country and does so in an environmentally friendly way, in accordance with the ASC certification.

“The certification is a recognition that we have made progress, but for me it is a continuous journey,” says Alvin Henderson, president of the Belize Shrimp Growers Association.

“We must continually improve how we do things, making sure that we are acting in a socially responsible manner, and that all our activities are sustainable. It's a journey, not an event,” he says.