Skip to main content
Women and the future of work: what's next?
Home

Women and the future of work: what's next?

In the years to come, two major technological trends will drastically transform the way we work: automation and intermediation platforms. And women, in general, will be impacted more than men in the face of both changes.

Automation is essentially the replacement of routine work tasks in offices and factories by robots, other machines or software. Intermediation platforms – applications or websites in which users who need a service are connected to the people who can offer it – mean a fundamental change in the way workers are hired. Airbnb, Uber and Rappi are examples of platforms within the so-called gig economy.

Both present new opportunities and risks for workers. Automation will render many jobs obsolete, while also generating new ones, primarily in programming, data analysis and areas that require empathy or creativity, which are difficult for machines to emulate. The gig economy makes work more flexible, but also makes it more uncertain, as the platforms do not usually offer benefits such as medical insurance, pension plans or vacations.

The Future of Work in Latin America and the Caribbean: What Will the Labor Market Be Like for Women? diagnoses the impact of these changes on female employment in the IDB region. Horizontal segregation, which describes when women study certain fields more than male counterparts, and vertical segregation, or the difficulty women face in securing managerial positions, will make women more vulnerable than men in the face of impending change. 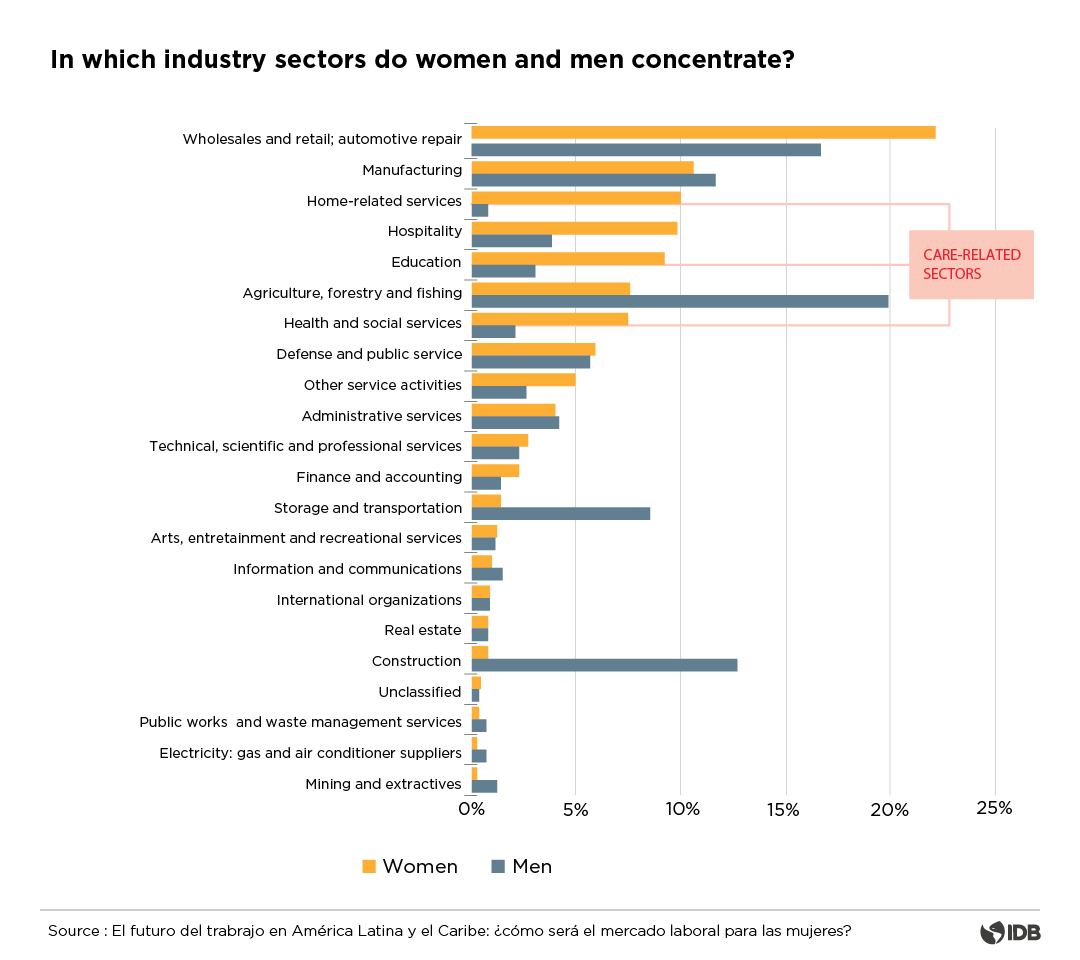 Today, the workforce gender gap in Latin America and Caribbean is one of the highest in the world. Despite advances that have seen the rate of female labor participation rise to 58%, the figure is still well below that of men, around 82%. The rate also varies greatly by country: the lowest level of female labor participation in the region is in Guatemala (39%) and the highest is in Uruguay (70%).

Among the working women of the region, gaps of a different nature are evident. While women represent 60% of university graduates overall, they account for only 30% of graduates in science, technology, engineering and math (STEM) fields. Nearly a third of working women in the region are in education, health and domestic service.

This imbalance is, in part, set early, as cultural and social norms encourage women to perform care-related tasks, while men are encouraged to choose more technical areas, like engineering and computing. The imbalance also leaves women more vulnerable, since many of the jobs that are highest paid and least replaceable by automation are in STEM areas. The U.S. Bureau of Labor Statistics forecasts that statistical work, software development and math-based jobs will grow by 34%, 31% and 30%, respectively, by 2026. Data from Latin America is in alignment; in Argentina, Brazil, Chile and Mexico, half of the 20 skills most desired by employers today are directly linked to the development of technology.

As women face greater difficulty in accessing management positions, they also have less opportunity to develop the skills that will help them adapt to the coming changes. In the region, only 20% of senior management positions in public administration and 4.2% of executive directors of publicly traded companies are women. In addition, of 14,412 companies analyzed in the report, only 21.4% have a woman in a high-ranking position. Moreover, when women do reach a managerial position, they tend to be involved in supporting functions, such as human resources.

“What we see is that women are not developing advanced quantitative skills. They are not developing communication and management skills because there are usually men who are in higher positions, while women do more routine tasks,” notes Monserrat Bustelo, senior specialist in the IDB’s Gender and Diversity Division. “The routine tasks they perform are much easier to replace with robots.”

A more auspicious fact is that fields such as education and health, where women are well represented, are less vulnerable to automation. These fields are also predicted to grow as populations in the region age. Data available for Argentina, Colombia, Ecuador, Guatemala, Paraguay and Peru indicate that women make more limited use of digital and internet devices than men, but closing that gap could also could be an effective mechanism to encourage greater female labor participation via the gig economy. The greater flexibility of the work could be a boon for women who care for children or relatives.

What to do about it?

The report raises three areas of action that will benefit both women and men, encourage female labor participation and counter horizontal and vertical segregation. The first is to promote continuing education in technology, both in basic and advanced skills, as well as in so-called 21st-century skills, such as creativity, conflict resolution and empathy. The second is to rethink the social-protection infrastructure to better include those who work from remote locations or in flexible environments. The third recommendation is to improve the quality of jobs in the care, education and health sectors so that they include better benefits, provide economic stability and offer upward mobility.

To these ends, the IDB is working on several initiatives. To help disrupt the negative, gender-based stereotypes about STEM careers that begin in childhood, the Bank allied with Sesame Street to create the “Little Adventurers” campaign, a mass-communication initiative that seeks to make math and science a comfortable place for girls, too.

The IDB has also supported youth vocational guidance and continuing-education programs aimed at facilitating women’s entry into technological fields. For example, the Bank has partnered with Laboratoria, a social entrepreneurship dedicated to intensively training women and girls in computer science.

To encourage greater representation of women in leadership positions, the IDB allied with the World Economic Forum to create the Gender Parity Initiative, a public-private platform in Chile that proposes concrete measures to close the economic gender gaps in three areas: participation, wages and advancement.
“There are many public policies that are necessary to change this, not just one. One piece of the puzzle is technological learning, but there are also many structures to change, such as paid maternity and paternity leave policies,” says Bustelo.

“In order for women to have better working conditions tomorrow, they must be shaped today – because if we don't fix the labor market now, it will be very difficult to do so in the future.”