Skip to main content
Transparency in Development: How to Ensure It?
Home

Transparency in Development: How to Ensure It?

Like millions of other men and women across Latin America and the Caribbean, Eduardo lives in a rural community. And like his neighbors, he walks to the local market each morning to buy three or four liters of drinking water. He has done this for the past five years.

“You can't drink water from the tap because it comes out a light-brown color. You don’t trust it,” he says. “I am not a high-income person, so this is an additional expense for me.”

Eduardo lives in a town of 20,000 people, far removed from the capital of his country. Here, infrastructure problems are acute. Large floods and strong earthquakes are not uncommon, while roads are poorly paved and homes are flimsy. The water and sanitation systems, too, often fail to meet the needs of residents.

Six out of ten people worldwide lack access to adequate sanitation facilities, according to the United Nations. In Latin America and the Caribbean alone, 490 million people do not know what it means to have access to safe sanitation. One of the UN’s Sustainable Development Goals is to ensure the availability and sustainable management of water and sanitation for all. The estimated cost of meeting that goal in Latin America and the Caribbean is $14 billion – just 12% of what is needed to meet the goal worldwide, but a daunting sum, nonetheless.

One significant impediment to progress is corruption in the region, which can lead to poor execution of the projects that aim to improve this and other kinds of infrastructure. Eduardo and his neighbors know that first hand.

In January 2011, the IDB financed the construction of a sewerage system for almost half-a-million dollars, which was to help ensure the purification of domestic wastewater before reuse. The project eventually began in 2014.

However, recalls Marcello Basani, senior IDB water and sanitation specialist, “The execution of the project suffered several delays, and the date of completion of the work was postponed in several instances – leaving us at the end of 2015 with an incomplete project that did not meet the contractual specifications.” Basani is also the author of a special report on transparency when executing water and sanitation projects throughout Latin America and the Caribbean.

The cause? “The illegal practices in everyday life,” he says.

Fortunately, the IDB does have mechanisms to ensure that projects are executed transparently. The Office of Institutional Integrity (OII) is at the heart of the effort, tasked with investigating and preventing fraud, corruption and other prohibited practices in Bank-financed work. In several instances, its investigations have revealed how corruption leads to unqualified companies obtaining contracts – which leads to inadequate results. 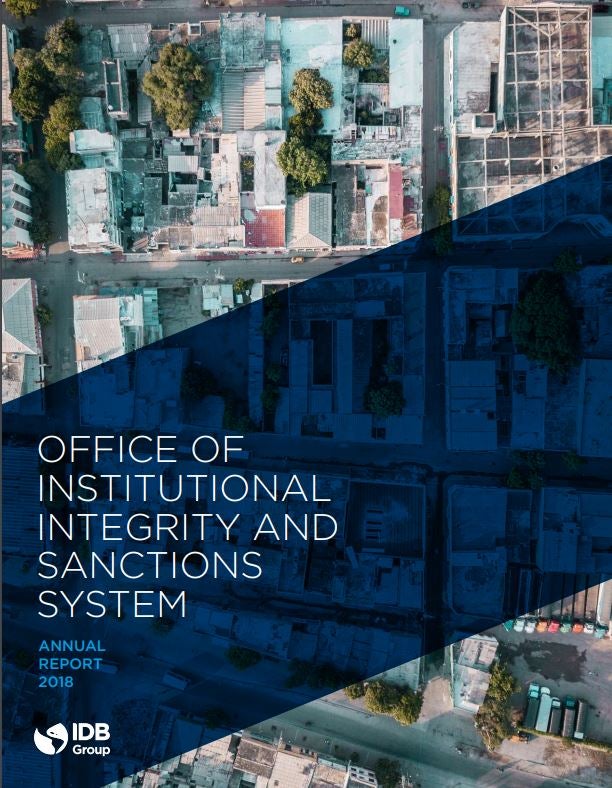 Click on the cover to download the OII's 2018 report to learn more about our work and its sanctions system.

How does the OII work?

In 2018, the OII answered 126 questions on how to manage integrity risks. It received and investigated 115 complaints of possible prohibited practices.

In the case of Eduardo, the OII worked with the project team to uncover evidence of fraud and corruption. The owner of the company that won the right to execute the contract had offered 25% of its value to an individual who had promised to help him obtain it. False tax certifications and promised bribes were involved in the process. Once construction began, inappropriate materials were also used.

After making several visits and inspecting the work, the project team noted “cracks, a suspicious porosity and residual water that literally circulated through the street.” The company’s lack of qualifications had been laid bare: the water-treatment system was unusable, affecting the functioning of the overall sewage system.

“It is worth highlighting in this story how fraud and corruption can affect the most vulnerable populations at the end of the day – in this case, one without adequate sanitary conditions,” says Basani.

Eduardo was brought to an emergency room and hospitalized for three days after drinking dirty water.

“A series of families have been affected here; it's not just mine,” he says. “And it's all because of the pollution that goes on and on.”

“My daughter was also in very bad shape, and the doctor told me it was because the water is totally contaminated. It is not water for human consumption.”

The IDB finally declared the project’s installation expenses ineligible, and at the end of 2018, the contractor was barred from working on IDB projects for 12 years. Additionally, the project team inspected similar works to ensure their integrity and implemented anti-corruption training programs for municipal governments.

“You have to carry out constant inspections of the works and follow up properly to avoid cases of corruption and fraudulent practices,” says Basani. "This is extremely important to detect failures in the quality of the infrastructure and ensure that contractors comply with the basic regulations to carry out such projects.”

The IDB Group recently approved the Second Update to its Institutional Strategy, which places special emphasis on promoting transparency and integrity in the region. Read it here.

For more information, visit our Office of Institutional Integrity page.