It extends from the south of Argentina to just below the Mexico-U.S. border. Its path traverses 160 cities in Latin America and the Caribbean, delineating the profile of a highly urbanized region. The IDB Cities Network, a platform that facilitates exchange of knowledge and solutions for city life, has been promoting environmental, economic and social sustainability since its launch in 2016.

IDB Cities Network: Which are the participant cities?

Together, the participating cities represent 160 million people. While unique in many respects, they also face common challenges in a region where over 80 percent of the population lives in urban areas. That proportion exceeds the European Union’s and only trails North America.

The figure is also expected to grow: by 2050, nine out of 10 in Latin America and the Caribbean are expected to live in cities or urban areas. That often means more density, and not necessarily more space.

Metropolitan governments are now facing the questions that come with the impending reality: How to cut commuting time? How to provide more sustainable and affordable housing? How to reduce ghettos and segregation? How to mitigate pollution?

“The IDB Cities Network matters because, if we want to achieve the Sustainable Development Goals, much of it must take place at the city level, where most people reside,” says Alfaro. “Change comes through cities: education, reducing poverty, work. All of that is provided by urban centers.” 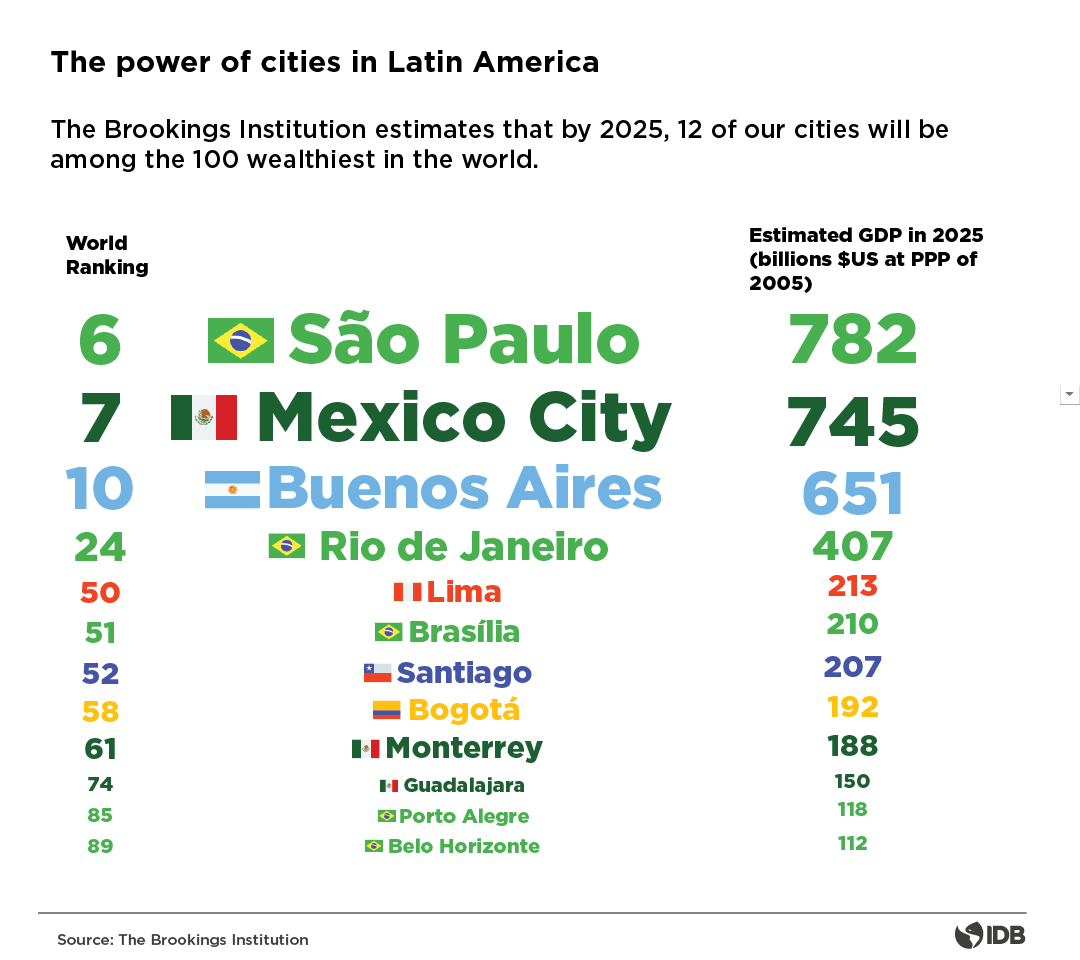 Much like the cities it connects, the history of the Network is one of rapid growth and a continuous search to solve challenges.

“It all started with the Emerging and Sustainable Cities Program,” says Alfaro. Launched in 2012, the initiative studied 77 medium-size cities in the region, creating a veritable x-ray of the challenges and potential of each one. Its success laid the foundations of a network that quickly grew to include capital cities and other metropolitan centers with a high growth rate.

The program developed into a space for exchanges, activating a wide offering of forums, meetings and workshops that address the fundamental themes of the region’s urban agenda. There, Latin America’s most successful experiences are socialized, from Medellín’s integrated transport system to the cable-car system of La Paz.

Mayors play an active role in the Network, as much to share successful policies as to replicate others with the support of experts from the IDB.

“The mayors are very practical. They have to improve traffic, fix the streets and provide lighting. They want to take things that have worked in other cities and modify them to see what works best for theirs,” Alfaro explains.

Held in Mendoza and Medellín last 2018, the meetings and forums of the Network’s mayors offered innovative ideas to transform cities, from social inclusion programs to public-private partnerships.

“What we are doing with this platform is helping Latin American cities to discover many more cases of how to make them more sustainable,” explains Maria Camila Uribe, the coordinator of the Cities Network. “The twinning between cities arises because they share similar themes, and what remains an issue for one has already been solved by the other, or it is an issue that unites them.”

Now, the Network is crossing the Atlantic Ocean in search of new input. 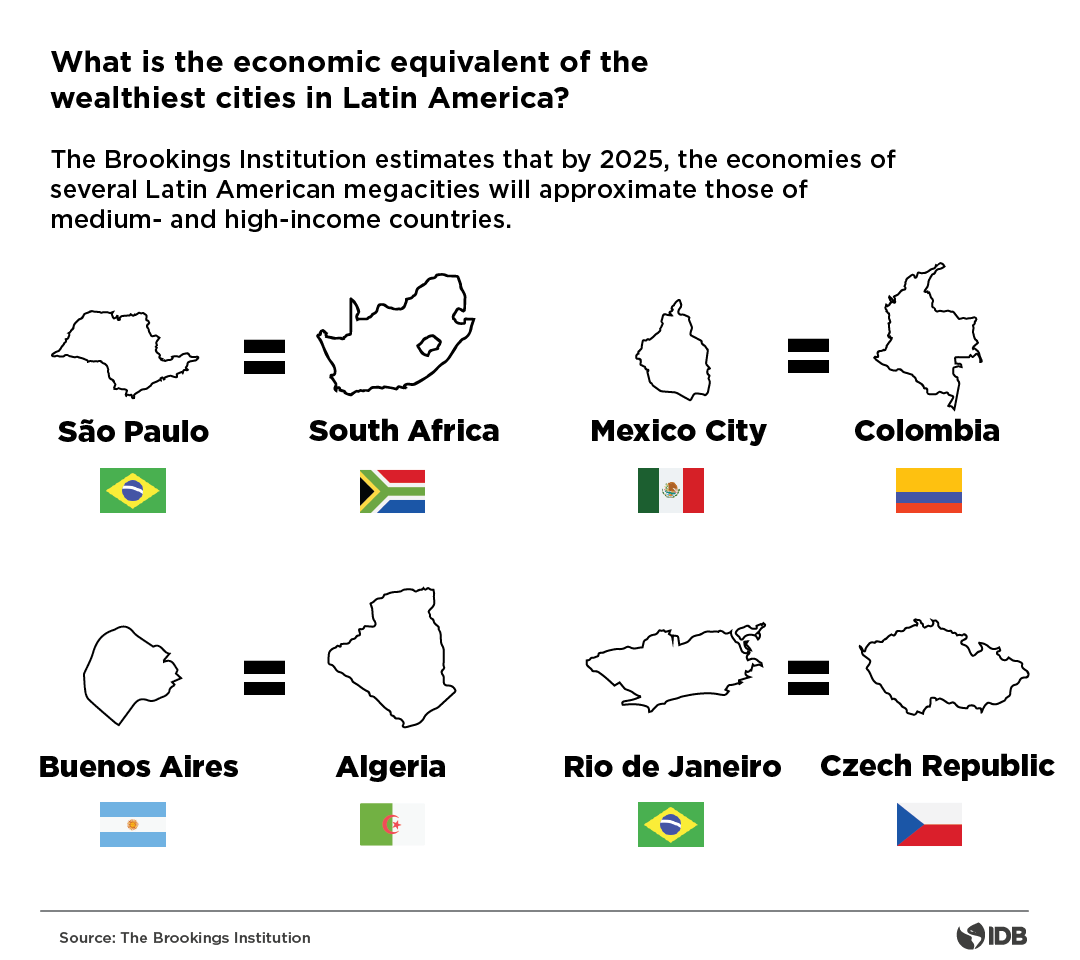 On May 2019, mayors and technical officials from sixteen cities in Latin America and the Caribbean traveled to Scandinavia for the “Urban Workshop: Learning from the Nordic Experience,” held in Copenhagen, Denmark, and Malmö, Sweden. Both cities are considered role models for sustainable transport and social inclusion.

Can the so-called “Nordic solution” to urban issues be replicated outside of Northern Europe? Beyond sharing best practices, the workshop focused on their suitability and viability in Latin American and Caribbean contexts.

Video: Learning from the Nordic experience

Andrés Julián Rendón, the mayor of Rionegro, Colombia, expressed interest in infrastructure “with people in mind” and a mobility strategy centered on pedestrians and cyclists that could be applied to his own city.

“We didn’t want to just know the solutions and look at them as they are now, but show the process of how they came to be and learn about the first steps and the issues that arose in the process,” Alvaro explains.

“We’re at a point where we don’t have to reinvent the wheel, but take what works and adapt it to the cities of the region. The Network is a mechanism to help do that.”

In the coming months, international Network events will explore topics including urban patrimony, social housing and the resiliency of cities in the face of climate change.


To learn more about sustainability across the region, click here.