Revitalizing a key industry in The Bahamas

A small community of about 900 people in Little harbour, in Mangrove Cay in The Bahamas, used to be home to a key driver of local economic growth--sponging. Little Harbour, which runs along a 1.5 million national marine park that is one of the Caribbean’s largest protected areas, is adjacent to the world’s third-largest barrier reef.

But Little Harbor’s well-being came under threat when the source of its vitality, fishing, began to decline. By 2011, exports of the area’s top product, sponges, had fallen in value to $540,000 from more than $1 million just a few years earlier. A fragmented supply chain and the lack of modern processing facilities and marketing know-how prevented local fishermen from charging much for the sponges, sharply limiting their income.

Local fishermen harvested sponges and sold them at a discount to exporters who then processed the goods and resold them at much higher prices. Locals produced no added value and they had no ties to customers abroad, which prevented them from improving customer relations, tweaking their products and services or increasing prices. 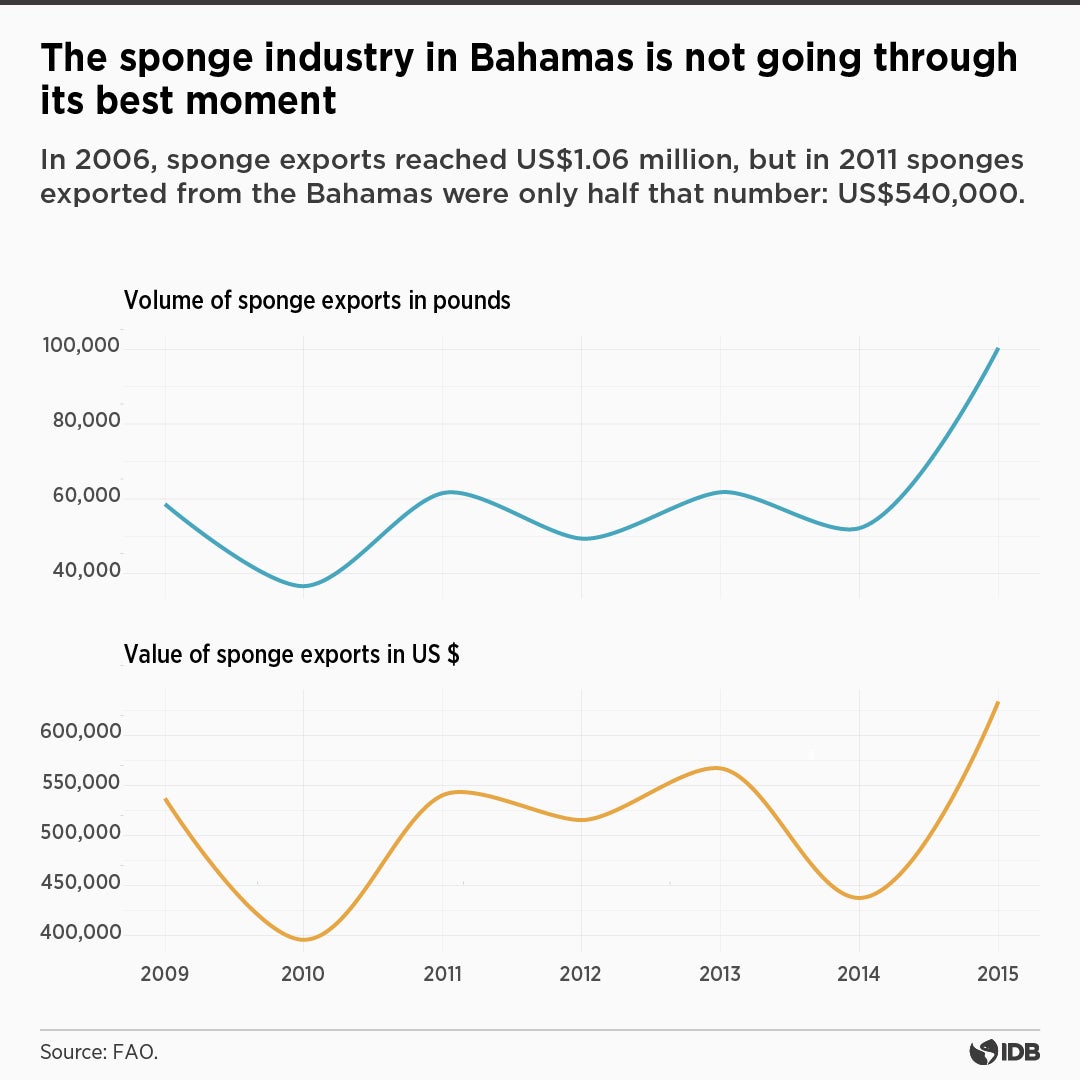 But all of that is changing thanks to help from IDB Lab, the IDB Group’s innovation laboratory, which is supporting a project aimed at strengthening the sponging business. IDB Lab is working on the project, dubbed Revitalization of the Sponging Industry, in conjunction with the Bahamas Agricultural Industrial Corporation (BAIC), and both have been offering training programs to help Bahamians develop more sustainable harvesting and better business practices.

The project has directly benefited 200 spongers and indirectly helped 440 beneficiaries in Mangrove Cay, on the island of Andros, the largest island in the Bahamian archipelago.

“This is one of our projects that closed last year, but the impact is now beginning to be realized due to IDB Lab’s intervention. The fishermen/spongers are now able to increase their incomes and quality of their livelihoods through exporting sponges internationally,” said Mikia Carter, IDB Lab Specialist for The Bahamas

Spongers say they are now doing more than just primary harvesting, which involves diving, cutting and selling unprocessed sponges. These days, when they gather to rest under their favorite almond tree after a long day of work, they talk not only about local community issues but also about business and customer development strategies.

“I must say that there has been a major improvement in the harvest since the training and a better opportunity for fishermen to sell their sponges,” says Maliancha Major, assistant secretary of the BCSA, the Bahamas Commercial Sponge Association.

The air hovering over Mangrove Cay is thick with anticipation that something good is about to happen. Fishermen and other stakeholders--half of whom are women--who have undergone the training, say they now feel empowered to take on a more active role in the industry.

Meanwhile, five other family islands are beginning to organize sponging associations. And spongers and fishermen elsewhere in The Bahamas, including on Long Island and in the Abaco Islands, have expressed interest in receiving similar assistance and training.

“It was encouraging to see so much support from the community in getting this industry restored on Long Island,” said Claudine Green, one of the project’s former coordinators. “Many of those who sponge or want to get into sponging also seemed very interested in establishing a local sponging association. This is very promising for the residual impact of the project.”

Since IDB Lab first approved the project in 2016, interest in the sponging industry has risen sharply and many prospective entrepreneurs are preparing to enter the business as marketers, sales consultants or value added processors. As a result, the industry is rebounding and poised to regain its standing as a key driver of local economic growth.

“Though many of the family island communities in The Bahamas may have lesser economic activity and smaller populations, we see that there is great opportunity to revitalize old industries and create new ones through IDB Lab’s interventions,” said Carter, from IDB Lab. “As was the case with this project and its scaling to go beyond Mangrove Cay, Andros and impact fishermen/spongers in other family islands like Abaco and Long Island.”

Half a century ago, the industry was so pivotal that it inspired the creation of a local folk song: “Sponger Money Never Done, Sponger Money is a lot of Fun.” Now, after receiving training that teaches fishermen how to develop the supply chain, improve marketing and access foreign markets, the industry is staging a comeback and allowing locals to benefit from higher prices and closer contact with customers.