Skip to main content
The Neediest and the Hardest to Reach: Informal Workers Face the Pandemic
Home

The Neediest and the Hardest to Reach: Informal Workers Face the Pandemic

It is a typical Saturday morning for María de Jesús Santos, 36, a resident of Antigua, Guatemala. She wakes up at 5 a.m. to make breakfast before heading to the artisan market, El Carmen. She prepares her stand before 9 a.m., laying out hand-woven textiles, necklaces, earrings and key chains.

“When business is good, I sell about four pieces per day, which is enough money for the rest of week,” she says.

A native of San Antonio Aguas Calientes, a town in the southwest region of the country that is known for its women weavers, Santos has proudly maintained her family’s tradition for 14 years. Her textile designs come “from memory, as my parents taught me,” she says. “It’s like a chain; the textile designs go from one generation to the other.”

Santos weaves for about 8 hours a day during the week and sells her textiles each weekend at the market. This constant activity is the only way she can make ends meet. Of Guatemala’s more than 17 million inhabitants, nearly 60% live in conditions of poverty and more than 23% live under extreme poverty, according to a study by country’s National Institute of Statistics (INE).

“I work till I sweat to feed my family,” says the single mother of three. “I teach my children how to weave, too, so that tomorrow they don’t become delinquents.”

Santos is part of the country’s informal-employment sector, which constitutes just under 70% of the population, according to INE. This large portion of society is particularly vulnerable during the coronavirus pandemic, with many possessing no savings and needing to continue daily work, despite the stay-at-home order. 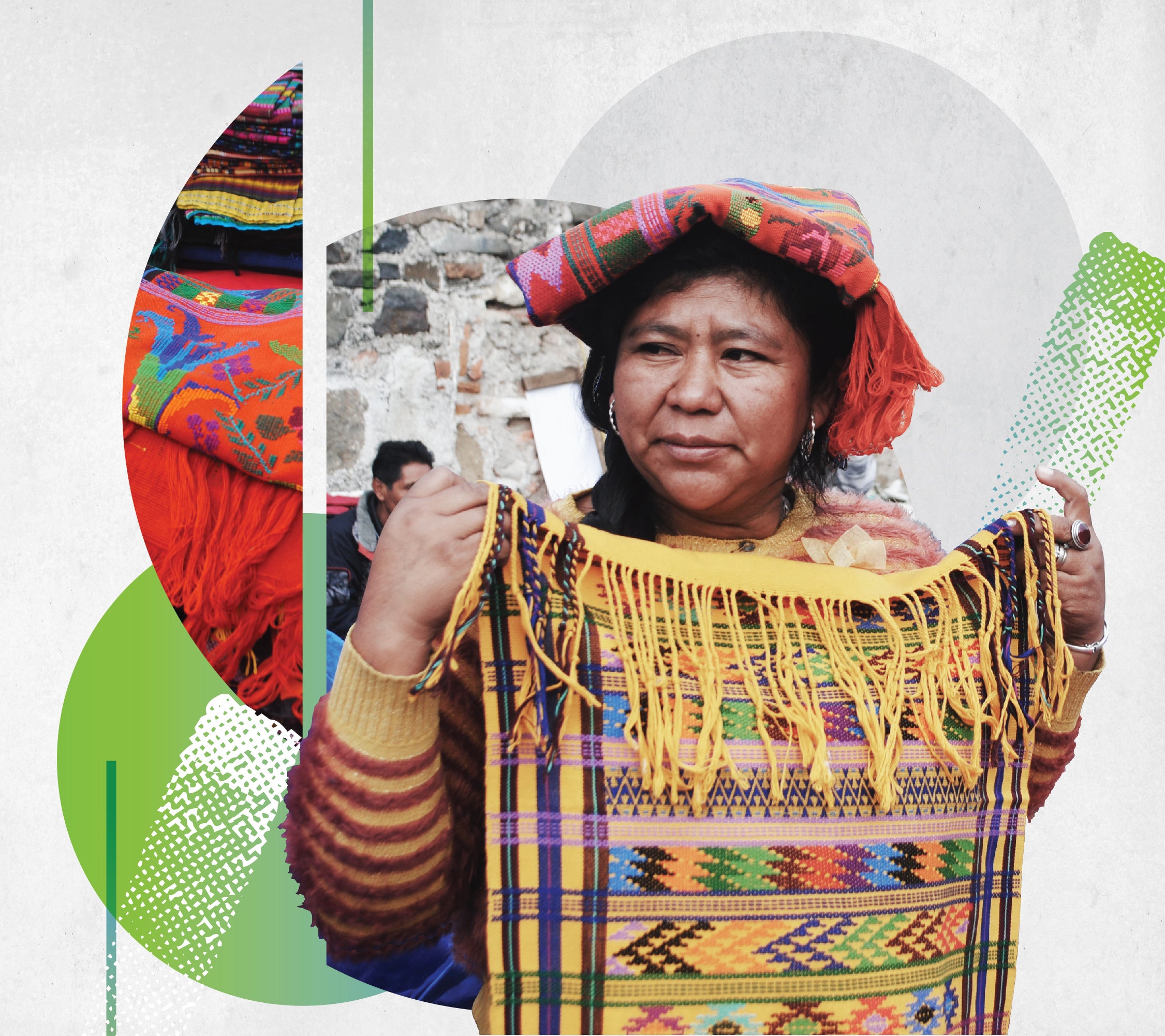 María López, 45, tells a similar story. Every other weekend, she travels to the same artisan market to sell her textiles.

“I wake up on weekends at 6 a.m. and finish my day late at night … sometimes without enough money to pay the rent,” she says.

López leases a room for 500 quetzales a month, about $65. She earns some $30 each weekend she sells at El Carmen and tries to make up the difference on weekdays by peddling her crafts to tourists on Antigua’s cobblestone streets.

Like many other women in Guatemala, López carries the cultural expectation of being the main caregiver. She is also her family’s sole breadwinner.

“After working all day, I return home to do chores for my children … It is sad that sometimes, only the mother fights.”

In Guatemala, half of the population earns less than the monthly minimum wage of 2,742 quetzales ($356). On average, women who work in the informal sector earn a mere 1,409 quetzales ($183), according to INE’s 2019 National Employment and Income Survey.

As the pandemic spreads across the country, women like Santos and López are at a higher risk of contracting the virus because their jobs require frequent contact with people. With fewer tourists, they are also working longer shifts with little to show for it. Without savings or social protection, their situation is dire.

How to support informal workers?

A successful response to the social and economic impacts of the health catastrophe requires “coordination from both the public and the private sector, working closely together and developing short- and medium-term solutions for informal workers,” says David Rosas a labor markets specialist at the IDB.

In the short term, introducing policies such as unconditional cash transfers to informal workers who have been deprived of their income and who have no social protection can provide immediate support during the confinement period. “This allows people to be able to stay at home to avoid contagion and have the resources they need to have at least a minimum standard of living … [It is the] most appropriate way to assist people who live day to day,” says Rosas.

In April, the Guatemalan government created Bono Familia, a temporary social program to help families economically impacted by the health crisis. The country’s Ministry of Social Development announced that some 6 billion quetzales (more than $700 million) had been authorized for the initiative and that each approved family would receive $130 a month for three months.

“The big challenge is to identify workers in the most vulnerable situations who were not previously registered in existing social programs, such as conditional cash transfers mechanisms,” explains Rosas.

To do so, creative strategies have been implemented, such as the use of digital platforms that allow people to apply, coupled with data from administrative records and other sources to verify eligibility. Other strategies rely on utility bills. In the case of Bono Familia, families whose electricity bill demonstrates that they consume less than 200 kW per month are considered eligible.  Mass text-messaging campaigns can help alert informal workers to the short-term social-protection programs available.

Santos and López are among the Guatemalans who do not have energy service in their homes. They can apply to Bono Familia by completing the Socio-economic Conditions Assessment Sheet, which is then reviewed by INE and other institutions. Once their information is processed and verified, they will become program beneficiaries.

Looking ahead, as governments start lifting restrictions and gradually reopen their countries, a shift to conditional cash transfers, directed toward training programs and temporary public employment programs, can promote recovery.

“In the opening phase, the challenge is to find opportunities for people who have lost their job and, at the same time, train them so they can improve their skills and have more chances to find a job in the sectors of the economy that will become more dynamic as the crisis unfolds,” Rosas says.

These conditional programs can be an alternative to unemployment benefits. In fact, few countries in the region have unemployment insurance schemes, and they only benefit workers in the formal economy.

“Public employment programs are called anti-cyclical programs because they help people when a crisis like this one occurs,” says Rosas. “Governments need to prioritize policies that insert informal workers in the sectors of the economy that will generate more formal jobs."

In the midst of the pandemic, programs and aid such as these are essential for informal workers such as María de Jesús, who wake up daily "worried that the children will have something to eat."

Learn more about how countries can transition from lockdown to reopening in our recent publication.

Read about the economic impact of COVID-19 in Central America (in Spanish).