Millennials, the generation that includes those born between 1980 and 2003, are commonly described as lazy, poorly prepared and without aspirations. It takes only a Google search to realize how prevalent these stereotypes are: when you type "millennials are" the search engine will autocomplete with "killing", in reference to the perceived damage they do to different areas of the economy and society. However, these labels do not represent the reality of the millions of people in the region that belong to it and who, in fact, are the future of our countries. 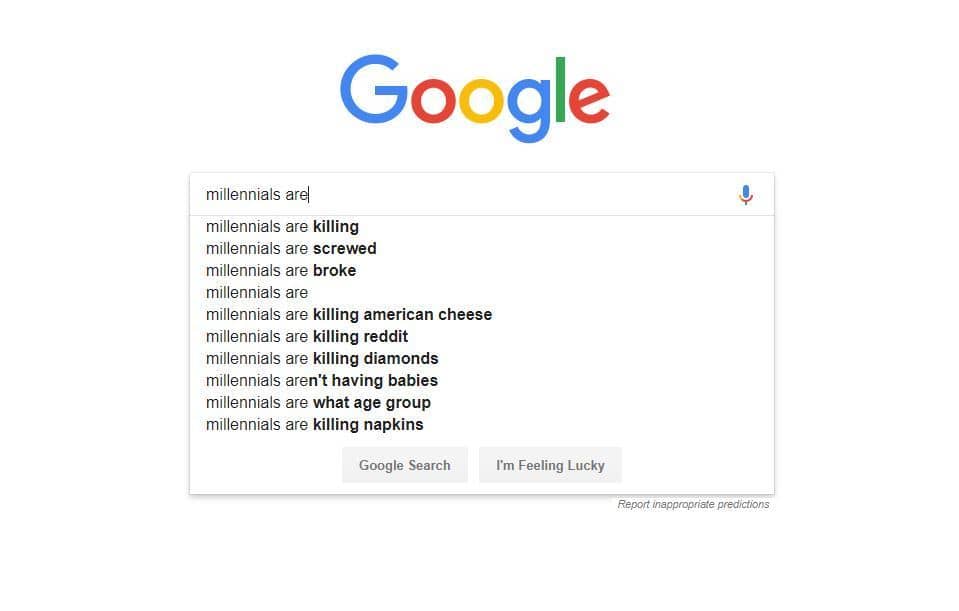 Between 2017 and 2018, we interviewed 15,000 people between the ages of 15 and 24 from Brazil, Chile, Colombia, El Salvador, Haiti, Mexico, Paraguay, and we used existing surveys in Peru and Uruguay, to capture their perspectives on work and education. With this data, we conducted a study to understand the conditions of Millennials in Latin America and the Caribbean in collaboration with experts from different countries, the organization Espacio Publico and the International Development Research Centre of Canada.

The study proved that the commonly held stereotypes about millennials are wrong. Let's start debunking the first one of them: millennials are lazy. In fact, the data indicates that 41% of them study, 21% work, 17% do both activities and 21% do not work or study. This means that nearly eight out of ten study, work or do both. It is that last 21% that is responsible for the bad name of an entire generation: the so-called "ninis", those who do not study or work (Spanish for "no estudian ni trabajan"). However, even they are unfairly characterized, since most of them carry out productive activities: 31% are looking for work, 64% are caregivers of family members and 95% perform domestic chores or provide assistance to their family’s business. Only 3% of those "ninis", approximately 0.6% of all Latin American and Caribbean millennials, do not do anything useful despite having the physical and intellectual faculties for it. 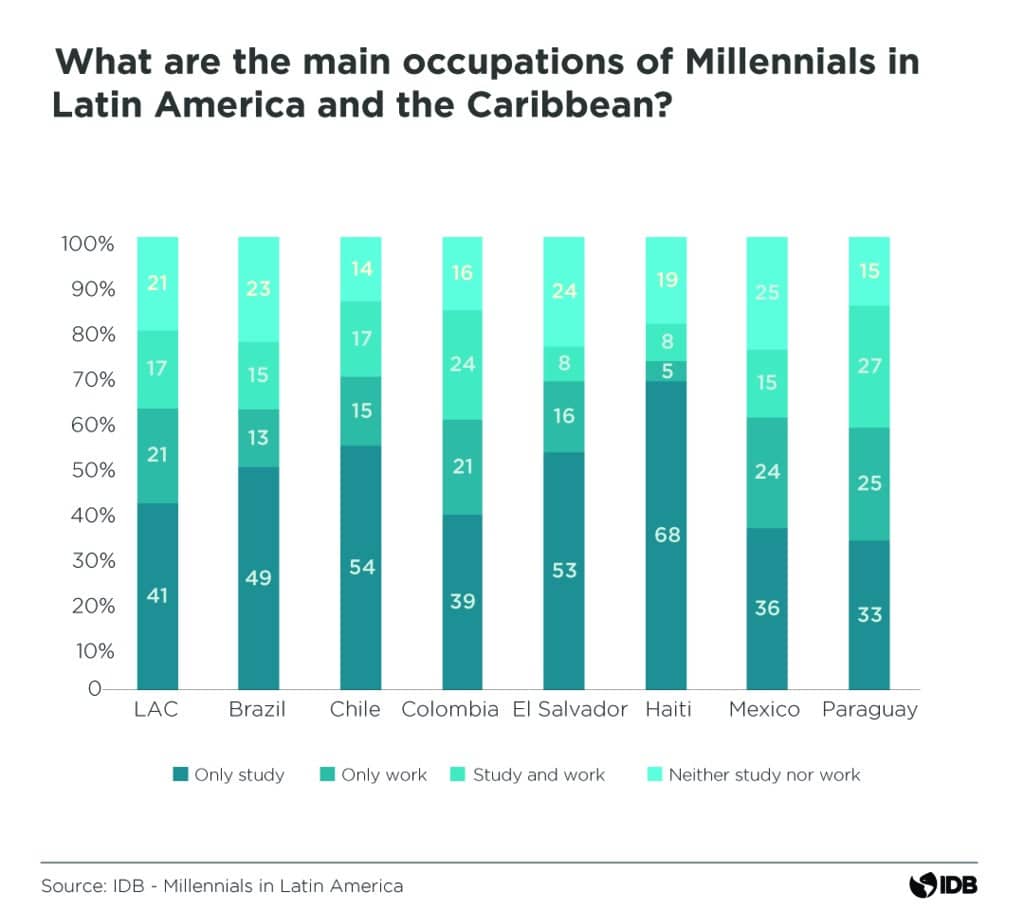 Aristides, a 24-year-old Salvadoran man, is one of those ninis. "I always dreamt of becoming someone in life, but unfortunately due to the difficult economic situation at home, I could not move forward," he says. For him, the ideal would have been to continue studying to meet his personal goals.

Another negative stereotype is that the Millennial generation is the worst prepared for the labor market. You guessed it: that is not completely true either, although the data does show a lack of basic skills. For example, 40% of them can’t perform simple mathematical calculations, such as dividing a quantity of money to distribute it equally among their friends. On the other hand, only 22% report speaking English fluently, a valuable skill in an increasingly globalized labor market.

For Olga, a 23-year-old Colombian, the lack of access to good English-language classes has been particularly costly for her professional development. "What I learned has been useless. Right now, they demand a lot of English and what we were taught in school has nothing to do with what the jobs require," she says. 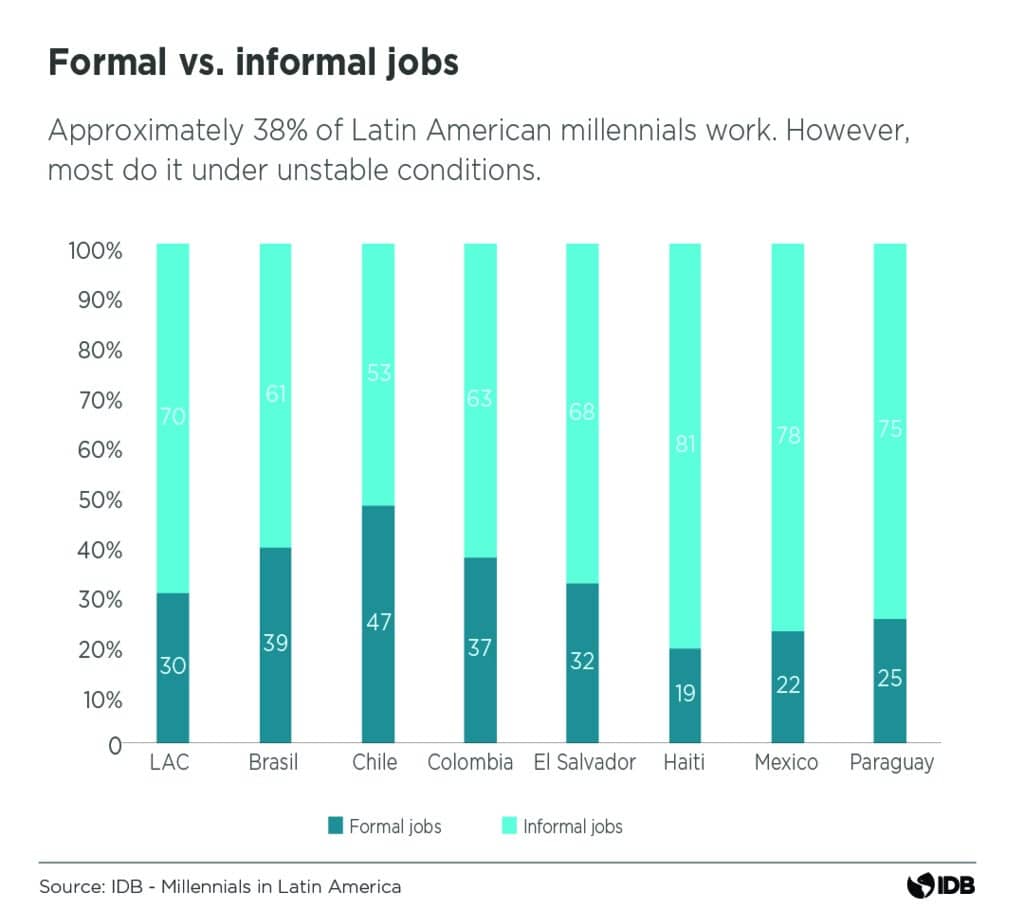 But, there is also a bright side: there are other areas in which millennials are stronger than those that preceded them, like the Generation X or the Baby Boomers. Most millennials handle technological devices very easily and have robust socio-emotional skills, which will be fundamental in a future with advancing automation and robotization. In particular, they show relatively high levels of self-esteem, self-efficacy and perseverance.

However, possibly the stereotype farthest from the truth is that millennials have no aspirations. The study revealed that while in Latin America and the Caribbean, on average, only 40% of the population has access to higher education, 85% of millennials aspire to finish university and 88% believe that they will achieve their work goals.

For Angeles, a 19-year-old Mexican, it is important to remain optimistic in spite of the possible challenges she might face along the way. "As a young person, I face labor discrimination because of my age, because I am a woman, because of the lack of work experience and because of crime, which is latent everywhere," she says. "But you can move forward. It takes a lot of work, but where there's a will, there's a way."

The results of the study indicate that the Millennial generation faces both a hopeful and worrisome outlook. To close the gaps and enhance the opportunities, the specialists highlight three areas in which the countries of Latin America and the Caribbean can work to improve the educational and employment opportunities of their young people: increase access to skills development, improve the quality and relevance of these skills, and offer guidance and job information.

Once these improvements are implemented, the only stereotypes that will define this generation will be positive. For Jeune, a 19-year-old Haitian, improving his work and educational opportunities will not only change his reality but that of his entire community. "I do not want to leave Haiti, I would rather travel in search of opportunities. I hope to become a great businessman, to generate wealth and employment for my country," he says.

You can read the complete study, with an in-depth analysis of each of the nine countries surveyed, here.