Math Education to Change the Calculus

Every three years, 15-year-olds from 79 countries are tested in reading, math and science to measure proficiency relative to their peers. The latest results of the Programme for International Student Assessment test, or PISA, came out on December 3, 2019. Students from the 10 Latin American countries that participated placed well below the world average. Their worst subject was math.

In fact, their average score on that section of the exam was a Level 1, the lowest possible out of six. According to the Organisation for Economic Cooperation and Development (OECD), which coordinates the test, Level 1 students fail to meet the minimum proficiency that all learners should reach by secondary school, and should be considered “at risk.” Panama and the Dominican Republic, along with the Philippines, had average math scores so low that a new category was created, “Below Level 1.”

Only Uruguay, Chile, Mexico and Costa Rica had at least 40% of their students perform above the minimum benchmark.

Experts say that one of the main reasons for the poor math scores is the method of instruction that most Latin American students receive at school. According to an IDB-funded study, students are primarily taught to replicate formulas and methods through drills, practice and memorization, without encouraging extrapolation of concepts to new and unfamiliar problems. This creates significant gaps in students’ capacity to meet real-life challenges.

“The problem is that in today’s age, if you forget a formula, it’s not a big deal, as you can simply Google it. But you cannot Google critical-thinking skills,” says Emma Näslund-Hadley, a lead education specialist at the IDB.

To change the calculus, the Bank is supporting a series of programs in Latin America and the Caribbean that rethink the way students are taught. The programs vary in scope and format, ranging from a partnership with parents in Jamaica to an approach based on inquiry and problem-solving in Belize to a complete redesign of how math is taught to indigenous children in Panama. All have been implemented with the support of the Japanese Trust Funds, resources provided by the Japanese government and administered by the IDB to support innovative ideas in regional development.

One of the most promising of these programs is JADENKÄ (pronounced “ha-den-go”), an ethnomathematics teaching approach for children of four to five years old. It uses inquiry, problem-solving, music and structured play to teach basic math skills that will be developed in  primary school, including number sequences, object counting and spatial orientation. However, the program’s most distinctive feature is its incorporation of the language, culture and traditional math practices of the Ngäbe, Panama’s largest indigenous group.

In Ngäbere, the language of the Ngäbe, there are 14 different ways of counting, depending on the characteristics of the object in question. One orange, which is classified as round, is rendered as “Kwa-ti-naran,”  or “rounded thing-one-orange.” If that same orange is cut in half and is no longer round, its noun class would change, affecting the way it is counted. 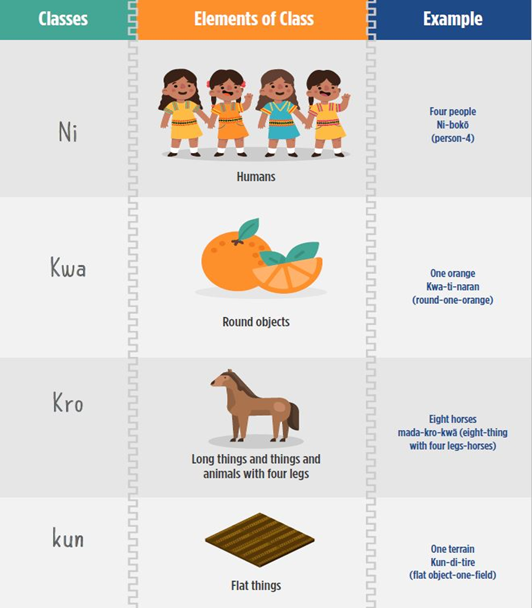 The need to incorporate indigenous understanding of counting and other concepts becomes all the more clear in light of the data. In the latest PISA test, Panama was the second worst in the math ranking, as only 19% of students attained the minimum proficiency recommended by the OECD. In indigenous communities, the problem is even more severe, IDB experts say.

“Students in the indigenous communities score much lower on national and international math assessments than students nationwide,” says lead education specialist Cynthia Hobbs. “It is crucial that we find better ways to teach Ngäbe children and that we incorporate their way of learning.”

Since its launch in 2018, the JADENKÄ program has been independently studied through randomized controlled trials by Innovations for Poverty Action, a U.S. non-profit that evaluates the impact of policy interventions. The research showed that the program led to marked improvements: by changing the pedagogical approach, the children’s progress was equivalent to receiving 9 additional weeks of instruction of Western math and 16 additional weeks of ethnomath.

The program is also helping teachers build stronger relationships with parents. Many of the participating teachers are not originally from the Ngäbe community and do not know the Ngäbere language. When JADENKÄ was first rolled out, Melissa Mitchell had to explain to her students, “Today, you will learn, and your teacher will learn, too.”

She recalled a conversation with a Ngäbe mother in which she asked for help with pronunciation. “If they are here, they can help me. Therefore, we will undertake this [program] between home, school and the teacher,” she says.

The play-based ethnomathematics approach of JADENKÄ was modeled on Tikichuela, a highly effective program supported by the IDB that was initiated in Paraguay in 2012. The adoption of the model, which won a prestigious award for educational innovation in 2018, shows how it can be scaled and adapted to other cultural contexts.

“The JADENKÄ program is important because it is from our own culture,” states Griselda Atencio, a teacher and former member of the Panamanian Ministry of Education’s National Directorate for Intercultural Bilingual Education. “The children can identify with this, and so, too, the teachers – and this allows us to value what we have: our language, our mathematics, our culture.”

Learn more about using student-centered approaches to improve math education in our publication, All Children Count: Early Mathematics and Science Education in Latin America and the Caribbean