Want to learn more about the extractive sector in Latin America? Check our online, free and massive course, taught in partnership with Columbia University.

It is a vast, white landscape that blends with the sky and clouds.

Bolivia’s Uyuni Salt Flat, a gleaming, 11,000-square-kilometer desert, is one of the best photo ops on earth (and is even visible from space). This unique landscape is also the site of the world’s largest lithium reserves. Perhaps not as dramatically, nearby countries Argentina, Peru and Chile also possess enviable supplies of the substance sometimes referred to as “white gold.”

Lithium, a metallic element, is best known for its role in energy-storage technology. Lithium-ion batteries, rechargeable and lightweight, power the most-used electronic devices on the planet, from cell phones to laptops. The design of the battery laid “the foundations for a wireless society,” said the Royal Swedish Academy of Sciences this year, when it announced the winners of the Nobel Prize in Chemistry.

John B. Goodenough of the United States, Stanley Whittingham of Great Britain and Akira Yoshino of Japan were decorated for their work developing that foundation. Investigations began when Whittingham sought a route to fossil-fuel-free energy technologies. In the years that followed, Goodenough and Akira worked to optimize the technology, eventually reaching a point when widespread use and commercialization were possible. 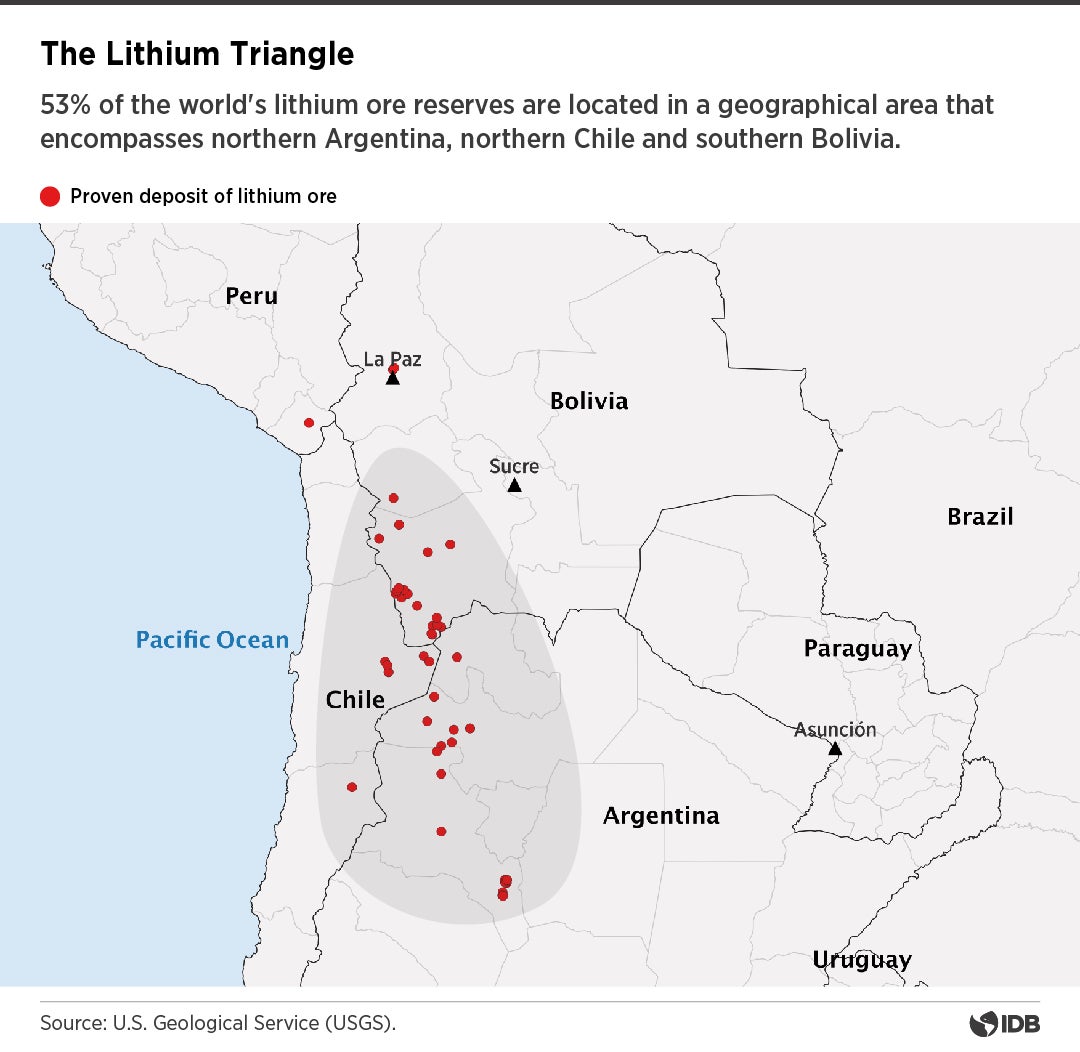 A revolution in the electricity industry resulted – with profound environmental and social benefits that are still to be fully exploited. Lithium-ion batteries do not just make for better electronic devices, but also allow for storage of significant amounts of energy from renewable sources, such as solar and wind. They are already used to power homes and commercial, industrial and educational facilities around the world. In addition, the batteries are what enable electric cars to operate with high autonomy.

“These batteries also promote development through access to energy, because they allow a greater application of solutions with solar panels in isolated systems. In this way, we can bring electricity to isolated homes throughout Latin America and the Caribbean,” explains Ariel Yépez, head of the Energy Division at the IDB.

Did you know that your smartphone could be powered by Latin American lithium batteries? (in Spanish)

The white gold for developement

Argentina, Bolivia and Chile make up the “lithium triangle.” The three countries, along with Peru, contain about 67% of proven lithium reserves and produce about half of the global supply, according to the U.S. Geological Survey. Currently, the lithium market is valued at about $2 billion, with an optimistic projection of $7.7 billion by 2022.

However, these countries face significant challenges to ensure that lithium production translates into an effective instrument for sustainable and inclusive development. Argentina has the potential to become the world's leading producer of lithium carbonate, which is used in medication to treat bipolar disorder, but needs more specialized technical knowledge and best practices around the lithium value chain. Companies in the region also have the opportunity to integrate renewable energy for processing, refining and transporting lithium. 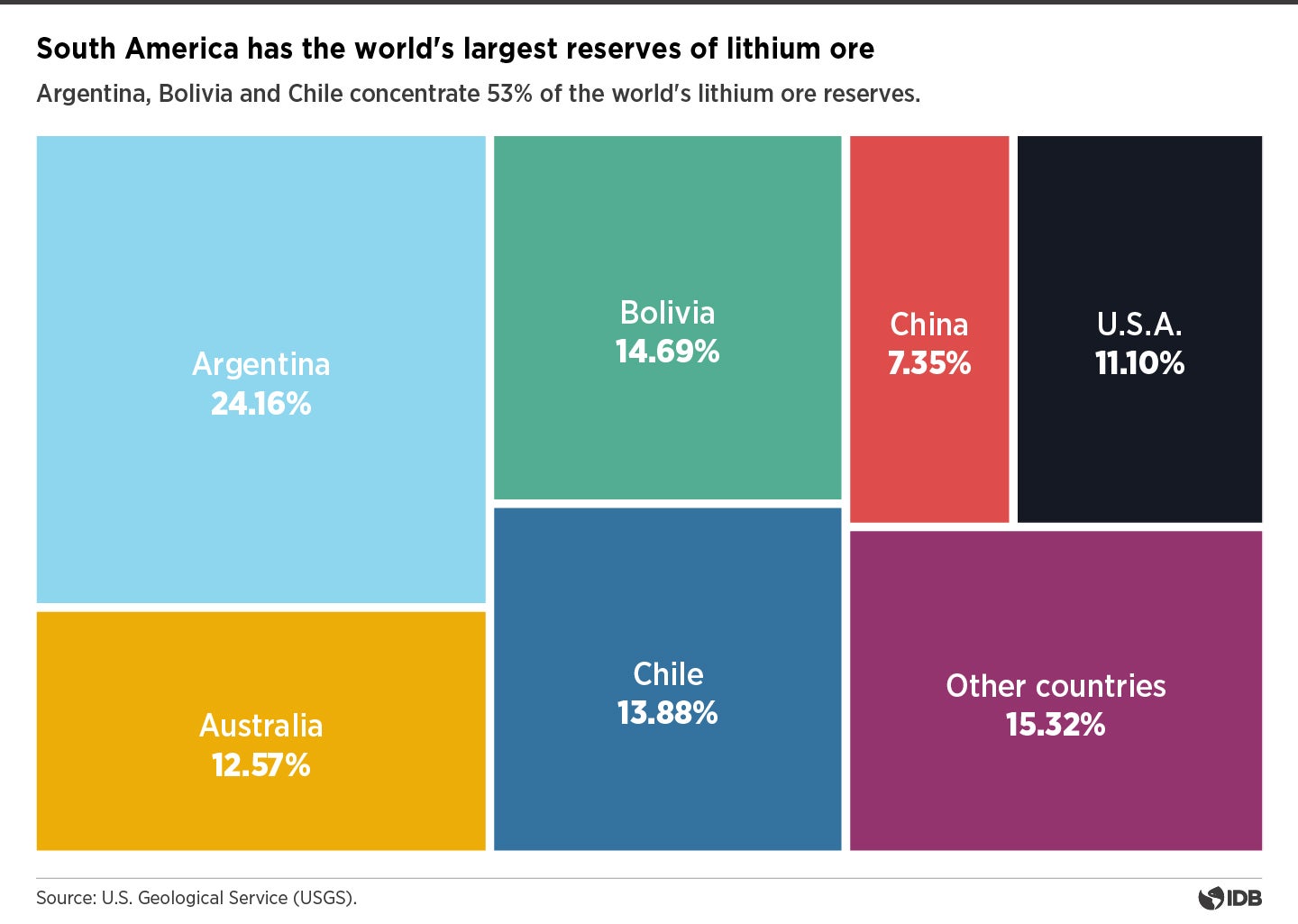 "Lithium batteries make possible a more efficient use of energy, a greater adoption of renewable energy and a lower impact on the environment," says Yépez.

Solar radiation is converted into electrical energy through photovoltaic solar panels. This energy can be connected to the electricity grid or it can be conducted through isolated systems. The excess energy produced by these panels is stored in batteries for nighttime use or during periods of low solar radiation. In isolated systems (islands or remote areas not connected to the power grid), it is necessary to store the energy through batteries to use it 24 hours a day.

The lithium battery allows that surplus to be stored more efficiently. These batteries can store between 95 and 99% of the energy generated, while those of lead acid - still commonly used to store solar energy - only reach up to 85%.

With the development of this technology it is possible to store the energy that supplies electricity to homes that do not yet have this service. Some countries such as Bolivia, Panama, Suriname are harnessing the energy produced by the sun's rays to electrify rural areas or islands. 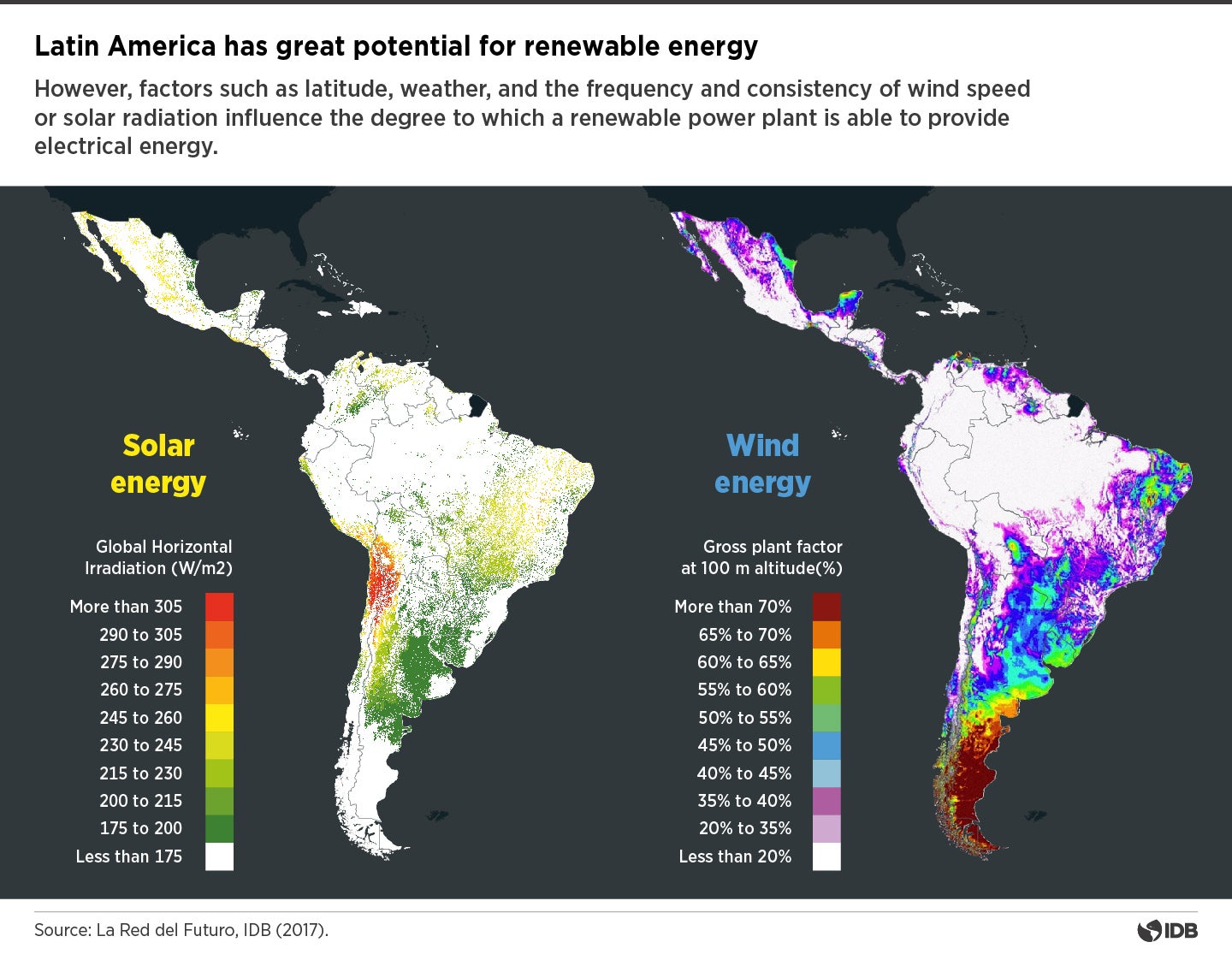 An example of this is a solar energy park that facilitated the conversion of the energy matrix to renewable on Corn Island, an island in the Nicaraguan Caribbean. The solar plant, financed by the IDB, has a capacity of 2.1 MW and lithium storage of 2.3 MW.

Thanks to lithium-ion batteries, Latin American and Caribbean countries will be able to take more advantage of solar projects to expand access to energy and reduce CO2 emissions.

To take advantage of these energies, batteries will be a central factor in the processes of reconversion of the energy matrix of the countries of the region.

Thus, then, a mineral and a technological design have transformed the world. The wireless and fossil fuel-free society could be closer and closer. In that race, the white gold of the South American salt flats will increasingly become a development engine for the region.

Want to learn more about the extractive sector in Latin America? Check our online, free and massive course, taught in partnership with Columbia University.