To know more about Jamaican and other Caribbean countries' economies, download our Quarterly Report from June 2019 for free.

Last December, Jamaica’s central bank posted a reggae music video on its Twitter account. Since then, more than 240,000 people have watched the video, prompting the bank to release a second video, which has already been viewed 180,000 times.

The bank’s reggae songs don’t contain your typical reggae lyrics. Instead, the songs tackle a subject that is central to monetary policy: inflation.

The subject is familiar to many in Jamaica, which for decades suffered from high inflation. The worst bout occurred in the early 90s, when prices soared 80% annually. Since then, the government has pursued a series of economic reforms, including inflation targeting, which entails setting a goal for the maximum inflation rate and telling the public about it.

The aim of inflation targeting is to contain rising prices and promote stable economic growth. In 2017, the central bank, formally known as the Bank of Jamaica (BOJ), set an annual inflation target of between 4% and 6%.

But for inflation targeting to work, people have to be confident that the government will be able to keep inflation within the target range. If people lack that confidence and believe prices will rise at a faster clip, they tend to spend their money as quickly as possible in the hopes that this will save them a little money. That increases demand for goods and services, pushing prices even higher. But when consumers believe the government will prevent prices from rising quickly, this becomes a self-fulfilling prophecy and helps the government to keep price hikes in check. 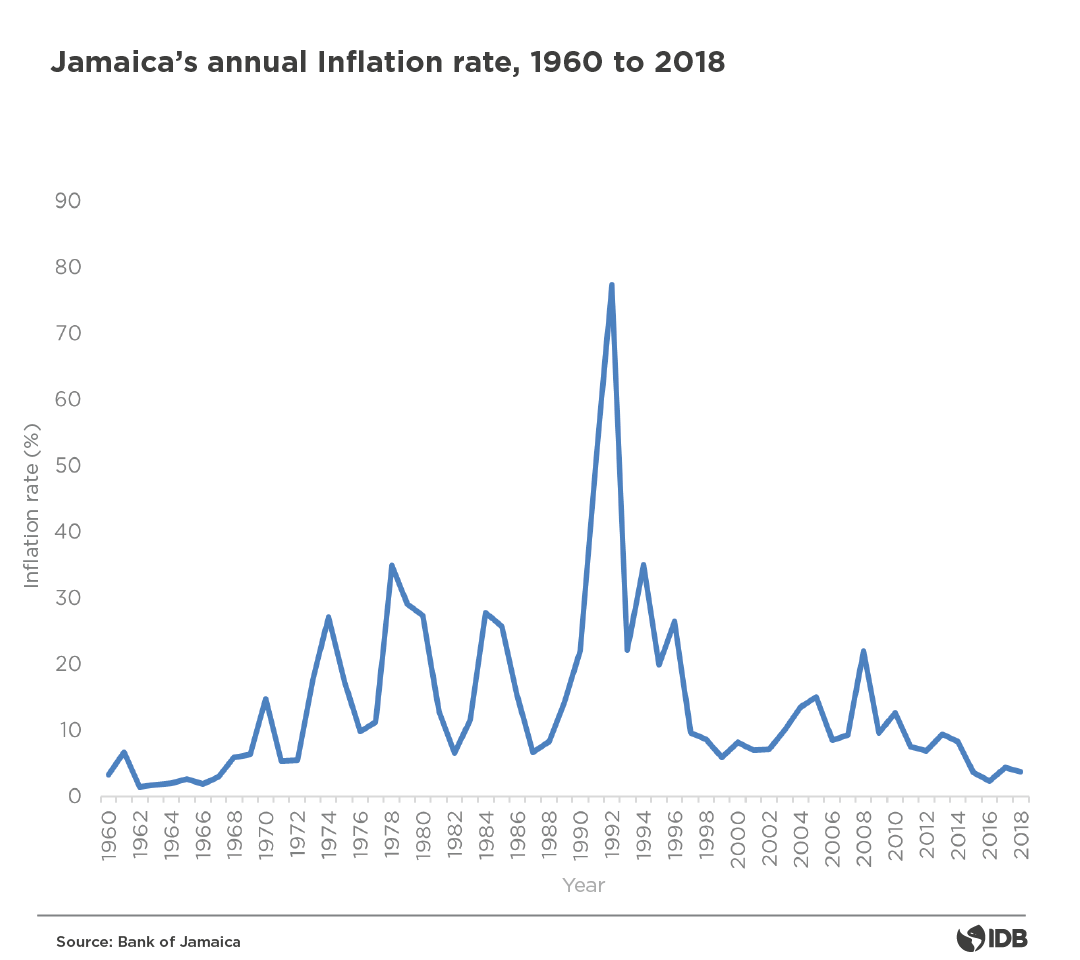 Because of this, it is critical for central banks to foster confidence in their policies. Consequently, central banks need to be good at communicating their policy initiatives and objectives. To do this, the head of communications at Jamaica’s central bank, Tony Morrison, decided to try something unusual--he turned to Reggae to help the bank get its message across.

“I used to use music in my work as a reporter on TV and as an entertainment manager I used to work with entertainers and manage bands. Music is a part of me,” Morrison said.

Morrison said his idea was to create a catchy song that would help people think about monetary policy. He thought the best way to do this would be to write “one of those annoying songs that you hear in the morning and then you find yourself singing it in the evening.”

When Morrison pitched the idea to his boss, the bank’s deputy governor, his boss “burst out laughing,” Morrison told NPR. But Morrison and his boss soon began working on the idea, which was eventually approved by Jamaica’s finance minister.

Morrison and his team partnered with reggae artists to produce the music. The songs then became part of a broader communications strategy that included an advertising campaign on social media platforms and billboards, as well as in newspapers and on local radio. The campaign even included an ad in a children’s publication distributed in Jamaican schools. A comic-strip on the economic program is also coming soon.

Morrison’s approach may not have worked in another country, but it made sense in Jamaica. In other markets, where the population may be more financially literate, traditional approaches to financial communication can be effective. But Jamaica hasn’t yet reached that level of financial sophistication, says Henry Mooney, the Inter-American Development Bank’s Lead Economist for Jamaica.

“Jamaica is one of the poorest countries in the world to ever have adopted inflation targeting,” said Mooney. “In more advanced countries—for example the United States or Canada—people are generally able to understand the implications of central bank economic and financial data releases for their mortgages and investment portfolios. In Jamaica, this is much less certain.”

By tailoring the bank’s messages and communication channels to local culture and circumstances, monetary authorities were able to roll out a state-of-the-art policy framework in a country that some skeptics had deemed unready for it.

Though unusual, the communications campaign helped increase the public’s understanding of monetary policy and its goals, boosting confidence in the bank’s ability to fight inflation. Jamaica’s success indicates that under the right circumstances inflation targeting could also work in other Latin American and Caribbean countries.

“Jamaica is proving that nearly anything is possible, if you are committed and innovative enough…” said Mooney.

Morrison also believes a similarly novel approach could work in other countries. “I think every country...should have some element of their culture that can be used as a communication agent,” he said. “Ways can be found for other central banks to enhance their communication, maybe not the exact same way, but using similar techniques.”

So far, the Jamaican central bank’s success with inflation targeting has been working. Inflation has been kept within the targeted range since mid-2017. Meanwhile, the bank has used its traditional array of policy tools—including overnight interest rates and reserve requirements—to curb inflation.

Aided by the International Monetary Fund and the Inter-American Development Bank (IDB), Jamaican authorities will continue expanding their ability to assess economic conditions, forecast developments, and adjust policy prescriptions. The bank will also continue to refine its communications strategy to ensure that inflation expectations remain anchored.

Jamaica will also continue working with the IMF and the IDB to strengthen its economy. While the country has been following a set of IMF programs for years, the IDB has played a key role in helping Jamaica to develop its economy. Indeed, the IDB provided more funding to Jamaica than both the IMF and the World Bank combined, according to Therese Turner-Jones, general manager for the IDB’s Caribbean Country Department.

"Jamaica's macroeconomic transformation is an example of how fiscal discipline and citizens’ support for tough measures can work to restore stability." IDB Caribbean's GM @thereselmm reflects on the partnership with #Jamaica during its transformation. https://t.co/QkGMGHHpVg pic.twitter.com/QyUUjJe69N

“The IDB is Jamaica’s main multilateral partner, which means we provide not just financing, but we also provide technical advice,” said Turner-Jones, who was recently in Jamaica, where she praised the country’s approach to combating inflation.

Turner-Jones said the bank’s communications strategy could also be adopted by institutions like the IDB and other organizations working in highly technical fields.

“Imagine if we could take other complicated ideas and put them through a cultural medium, like music. Imagine how we could change the world. Think about some of the things we would like to communicate at the IDB like sustainability or climate change. If we could come up with cultural ways of getting those messages across it would be a slam dunk,” she said.

To know more about Jamaica's economy, download our Quarterly Report from June 2019 for free.