Life at more than 3,000 meters high has its lows. In Moya, a district in the Peruvian Andes, the river water has high concentrations of sulfur and is unsuitable for agriculture. Bartering and the sale of staple ingredients sustain communities amid a backdrop of cold weather. Another challenge is isolation – and not just the physical kind.

"We just did not have internet access. Even knowing that it existed, we had not seen it," says Aydé Valenzuela, director of school number 36051, which serves Moya’s students. "Now, everything has changed," she adds.

Internet para Todos (IpT), or Internet for All, is responsible. The company formed out of a collaboration between IDB Invest, the private-sector arm of the IDB Group, Telefónica, Facebook and the Development Bank of Latin America (CAF). Its first antenna was launched on June 28 in Moya, and work is proceeding swiftly: IpT is planning to bring 4G mobile internet access to an average of 27 locations per day. By the end of 2021, the company estimates that it will have connected 6 million people in more than 30,000 rural areas in Peru.

"This is a unique and innovative project of a transformative nature," says Gema Sacristán, Chief Investment Officer at IDB Invest. "With projects like this, we will help close the connectivity gap and solve the development challenges facing Latin America and the Caribbean."

IpT’s work in Peru is made possible by a regulatory framework that allows for the existence of rural operators, or Operators of Rural Mobile Infrastructure. As larger mobile operators considered it too risky to provide services to small or remote communities, rural operators were greenlighted in 2015. However, they faced the challenge of funding their own infrastructure and maintenance. Now, the partners behind IpT are making a first attempt to reach isolated areas without internet services through a private solution.

Specifically, the company enables operators to make use of existing infrastructure owned by Teléfonica to expand coverage. While the telecommunications giant already has 3,130 towers across Peru, IpT also intends to install an additional 866 by 2021. That connectivity is sure to have an impact that cuts across sectors, providing educational, social, and commercial benefits.

"As a development finance institution, we want to play a unique role in these associations, because we have a long-term vision of returns," says Sacristán. "This contrasts with many investors who are not interested in extending broadband to rural markets, largely because of the risk.”

Today, 56 percent of people in Latin America and the Caribbean use the internet – 36 percent more than in 2006. However, well under 50 percent of households in the region have a broadband connection, lagging far behind the nearly 90 percent in the high-income countries of the OECD. Moreover, the urban-rural gap is sizeable. According to the Economic Commission for Latin America and the Caribbean, the average level of digital inequality between urban and rural areas in the region is 27 percent. 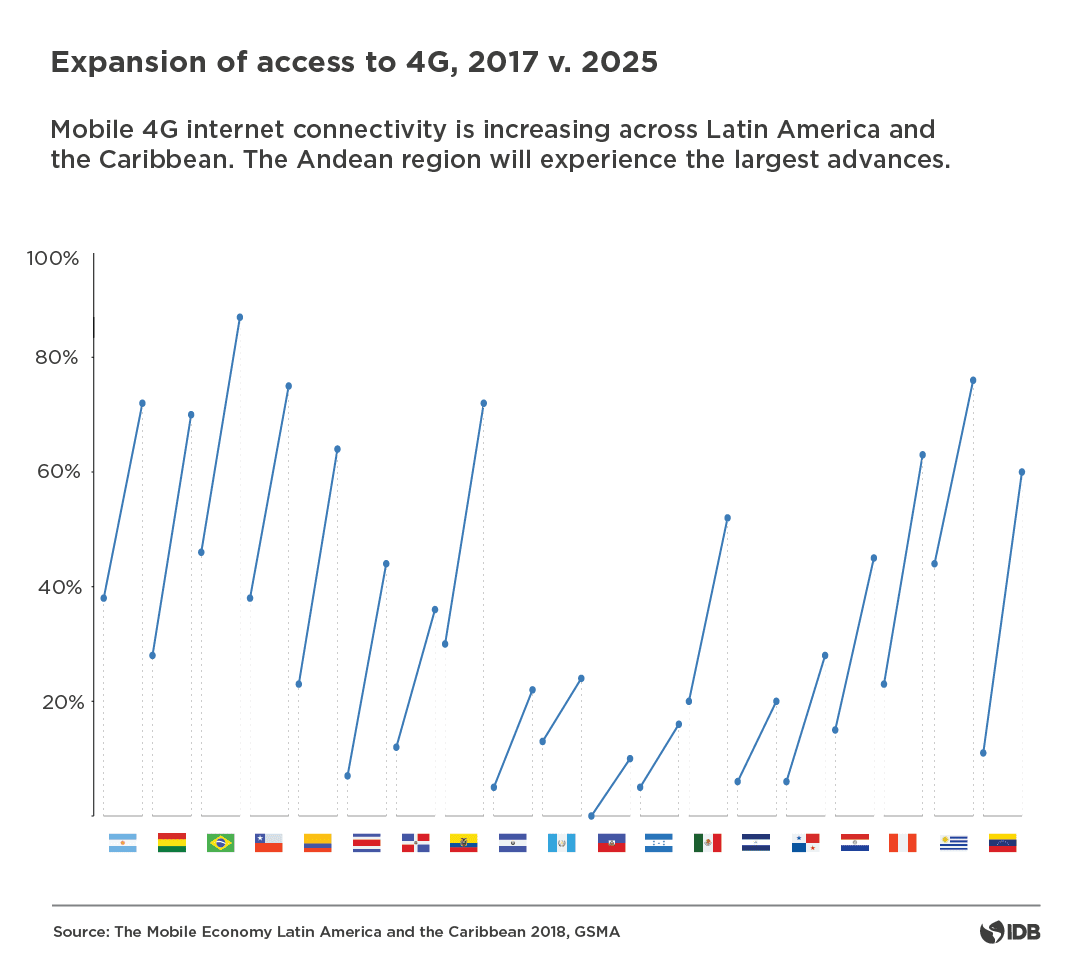 That is that gap that IpT is working to bridge. Beyond Peru, the goal is to replicate the approach in other Latin American and Caribbean countries, where some 100 million people still do not have internet access. Today, IpT partners are exploring opportunities to expand to isolated areas of Colombia as a next step.

“We are going to work under a novel model: low cost and totally open technology," says Teresa Gomes, the company’s general manager.

Back in Moya, the director of school number 36051 says that Telefónica will donate 16 tablets to make use of the new connectivity. Teachers have been trained to use them and a system of shifts and rotations has been established so that everyone has a chance.

"We are excited by what our students are learning," she says.

To learn more about connectivity, download The Evolution of Mobile Telecommunications in Latin America and the Caribbean here!