Interested in knowing more? Check our free, online course for Leaders in Citizen Security and Justice Management, taught jointly by the Center for Citizen Security Studies of the Institute of Public Affairs of the University of Chile, the John Jay College of Criminal Justice of The City University of New York, and the Santa María School of Law (FADISMA) of Brazil here!

At the end of the 2000s, Ecuador was in the grips of rising street-gang activity and the violence that came with it. According to the National Police, more than 400 gangs were operating in the Guayas province, home to the country’s second city and primary port, Guayaquil. The Latin Kings, also known as the STAE, were thought to be responsible for more than a quarter of the city’s homicides in those years, according to civil society group SERPAZ. In parallel, juvenile arrests spiked, as authorities sought to combat the trend.

But in 2007, the country’s approach to gangs took a dramatic turn: it began to legalize them. The STAE became the first gang to be formally recognized as an "urban youth group" by the state. The homicide rate in Ecuador has since gone from 15.35 murders per 100,000 people in 2011 to about 5 in 2017, approaching the rate of countries such as Argentina. However, little was understood about the factors and their combination that produced the impressive outcome. Research by the IDB confirms that the new strategy did work – and that it points to the benefits of a holistic approach to fighting crime. 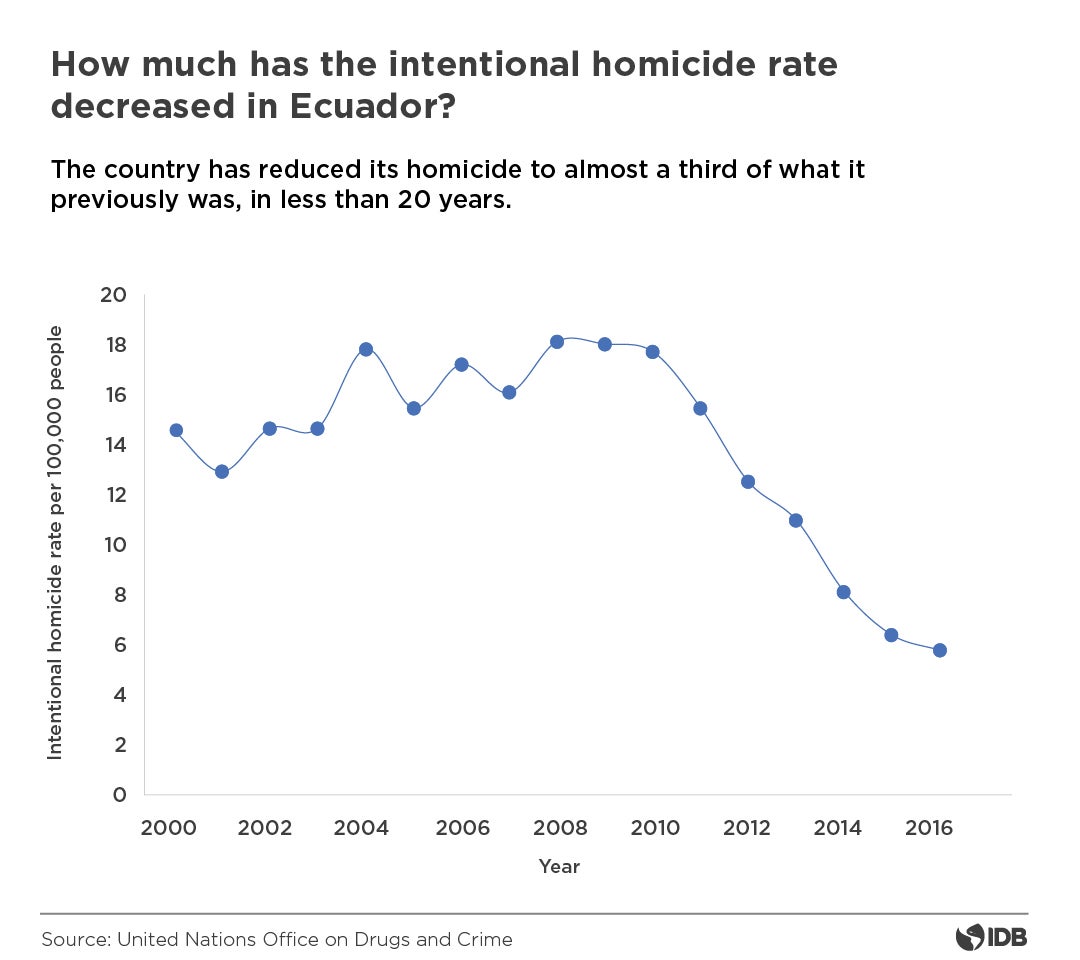 Out of the Shadows

Based in part on 60 interviews with gang leaders conducted between April and October 2017, the research describes how legalization policies not only reduced homicides, but “provid[ed] a space, both culturally and legally, to transform the social capital” of the groups. After legalization, gangs could apply for state funding to develop cultural and education initiatives, generating a clear incentive that quickly found support. In the process, the policy meant close work between the gangs and government ministries. The study identifies a learning curve on the part of gang leaders and a willingness on the part of the authorities to work with individuals who had never cooperated with the state apparatus before.

"Before, we were invisible. We suffered a lot of discrimination from the police. They did not let us use public spaces or participate in politics. Today, we can have a dialogue and create new opportunities to interact with political actors in influential positions," said one of the group’s leaders quoted in the research.

The study also identifies that the legalization of the STAE had a significant domino effect, as other groups saw the benefits of state recognition and incorporation into the system. Even those STAE members who were originally against the policy gradually changed their minds: "After we became legal, legalization became fashionable," a group leader said.

“We need to rethink the way we build more peaceful societies. The Ecuadorian case teaches us a very important lesson: inclusion is a more powerful tool than exclusion and the force to reduce violence,” says Mauricio García Mejía, leading state modernization specialist of the Innovation Division to Serve Citizens of IDB.

While the authors believe that the policy can be effectively applied in other countries, they concede that the success factors in Ecuador are not easy to replicate; the results came within the context of historical and social particularities as well as the discourse of "a new political narrative." An essential part of the success was that adequate resources were invested and work was coordinated among several ministries, including Economic and Social Inclusion, Justice and Interior.

Notwithstanding the unique elements in this case, the authors conclude that the governments of the region must go beyond traditional recipes and look to innovate in order to effectively combat gang violence and crime. The Ecuadorian experience demonstrates that a hard-handed approach is not necessarily as successful as a more holistic, multi-faceted one.

"The biggest challenge is that this lesson must be internalized by everyone, from the population, organized civil society and political parties, academia, to public entities, particularly those directly responsible for promoting justice and citizen security," says García Mejía, from the IDB. "We all have a role to play in building a better society."