This article has been published in the framework of the World Water Week 2019, organized by the Stockholm International Water Institute (SIWI) from August 25 to 30 in Stockholm, Sweden.

Ana and María live in one of Latin America’s big cities. Like many twenty-somethings, they’re both avid social media and smartphone users. Ana takes her smartphone everywhere, even to the bathroom. When Maria goes to the toilet, however, she leaves her phone at home.

For Ana, the bathroom, which is just steps from her bedroom, is a place to relax and even find a bit of privacy. For Maria, though, the bathroom can be dangerous. Her toilet is a public latrine. Using it exposes her to poor hygienic conditions, a lack of privacy, harassment, and potentially even sexual violence.

The contrasting nature of Ana and María’s bathroom experiences reflects an uncomfortable reality for millions of people in Lain America and the Caribbean, where the toilet has become a symbol that differentiates the haves from the have-nots throughout the region.

While the growth of smartphones and wireless internet services have surged in recent years, sanitation conditions have improved at a slower rate. Indeed, about 490 million people--or 69% of the region’s population--lack proper sanitation and many people are often exposed to excreta. Every day, 19 million people in the region use outdoor bathrooms or latrines.

The good news is that over the past 50 years our region has made significant progress and about 95% of the population now has access to water. Still, that doesn’t mean that water services are always good or even reliable. Indeed, a lack of sanitation remains a threat to the provision of safe drinking water. Only about 20% of industrial and residential wastewater is treated before being discharged, often into rivers or lakes.

Addressing the situation would cost about $180 million annually through 2030, the year in which nations have committed to achieving a series of Sustainable Development Goals (SDGs) proposed by the United Nations. One of those goals is improved sanitation. That multimillion dollar figure is more than twice what is typically invested in the region during any given year.

Which begs the question: what can we do to increase investment and improve the situation? 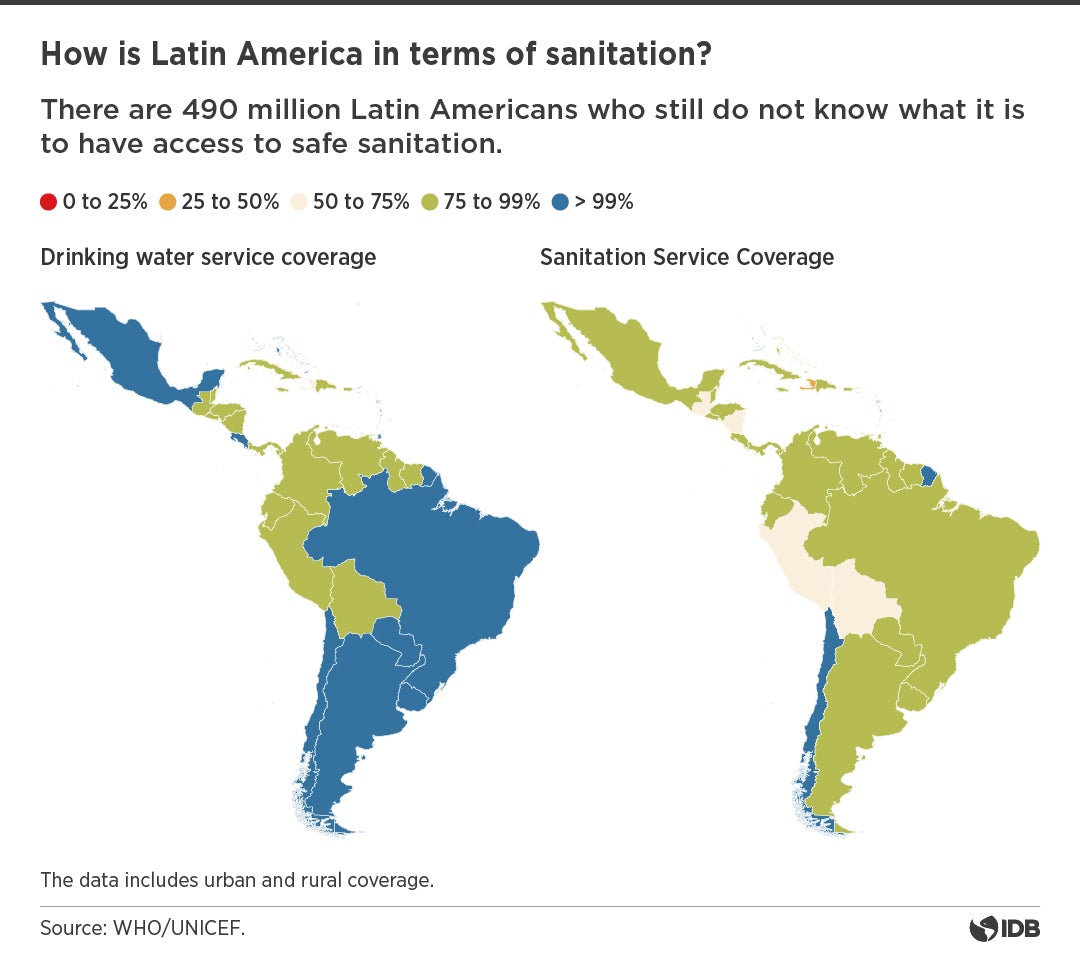 In the 1980s, a group of engineers in the Brazilian city of Natal asked that same question. The answer they came up with was to create a model that is now considered the gold standard for providing sanitation services in Brazilian slums, or favelas. It’s called condominal sewerage.

Condominal sewerage consists of working with a slum’s residents to design a sewer network that costs less than a traditional system. The pipes can be installed at shallow depth and at a flatter gradient, allowing for a more flexible design. Engineers plan the network around existing pipes instead of creating an entirely new system. Then the communities that benefit from the network actively help to maintain it.

This approach has brought clean water to areas that previously had none. Despite the progress, however, condominal sewerage isn’t a panacea. That’s why the Inter-American Development Bank (IDB) is developing a new approach to improving sanitation. 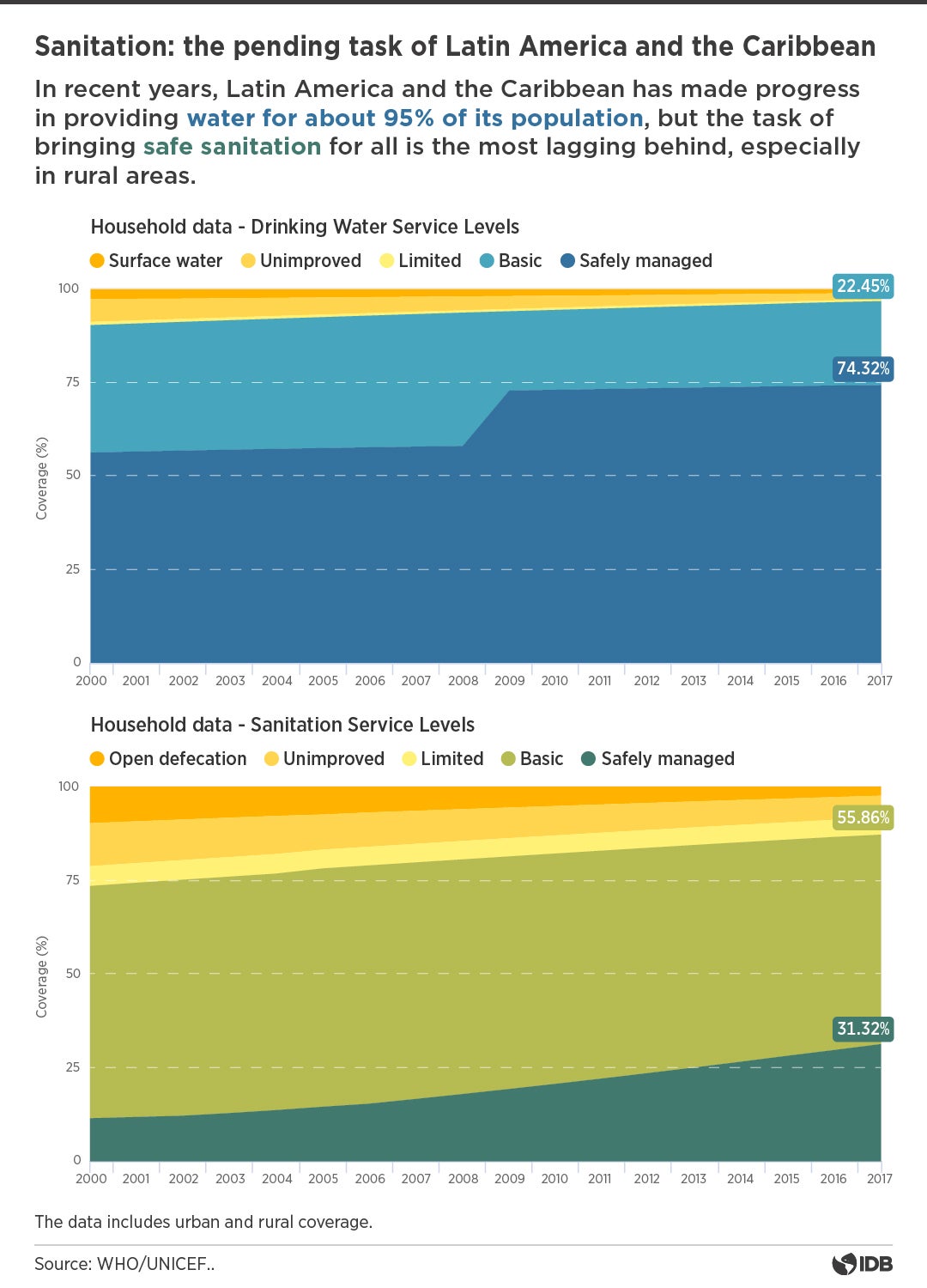 This approach has four main axes. First, work with vulnerable populations, with an emphasis on the gender approach. Second, work in watersheds, especially those in urban areas, to increase wastewater treatment and sanitation. Third, encourage the development and adoption of flexible solutions, appropriate to each situation and scalable. And fourth, to improve governance: develop national evidence-based sanitation plans, and the compatibility of policies with that of other sectors. These plans will be a factor to facilitate financing for sanitation.

The approach entails working closer with vulnerable populations, particularly women. Community participation also promotes sanitation as a source of economic development, a generator of employment and opportunities for the same beneficiaries and entities that already work in the sector. Most importantly, the IDB expects to mobilize $15 billion for investment projects over the next five years to improve sanitation across the region.

“The optimal sanitation platform is a commitment and a responsibility so that the toilet ceases to be the great social separator, and instead is a universal service for everyone in Latin America and the Caribbean,” says Sergio Campos, head of the IDB Water and Sanitation Division.

This article has been published in the framework of the World Water Week 2019, organized by the Stockholm International Water Institute (SIWI) from August 25 to 30 in Stockholm, Sweden. The IDB is regional coordinator of the Americas and Key Collaborating Partner of the Week.

To learn more about sanitation in Latin America, download for free: World Water Week 2017 and Access to sanitation, the case of Uruguay.