Skip to main content
How does trust impact your quality of life?
Home

How does trust impact your quality of life?

Philip Keefer is a self-professed trust-wonk. A specialist on the economics of institution-building, Keefer has spent the greater part of two decades researching how trust—or the lack of it—impacts public policies.

Trust, it turns out, is a scarce commodity in Latin America and the Caribbean. According to a poll by Latinobarometro, 43 percent of Mexicans say they have low trust in people of their own communities. That number is 54 percent for Peruvians. In Brazil, it’s 63 percent. In contrast, in the United States only 20 percent expressed low levels of trust in people of their communities.

Similar questions about trust in institutions such as the Presidency, Congress and political parties revealed large gaps between Latin America and the Caribbean and richer economies. Argentinians, for instance, were twice less likely to trust their political parties than Canadians.
“Trust plays a huge role and Latin America never ranks high,” said Keefer, the principal economic advisor to the IDB’s Institutions for Development department. Low levels of trust, he adds, “affect reforms and how you get change.” 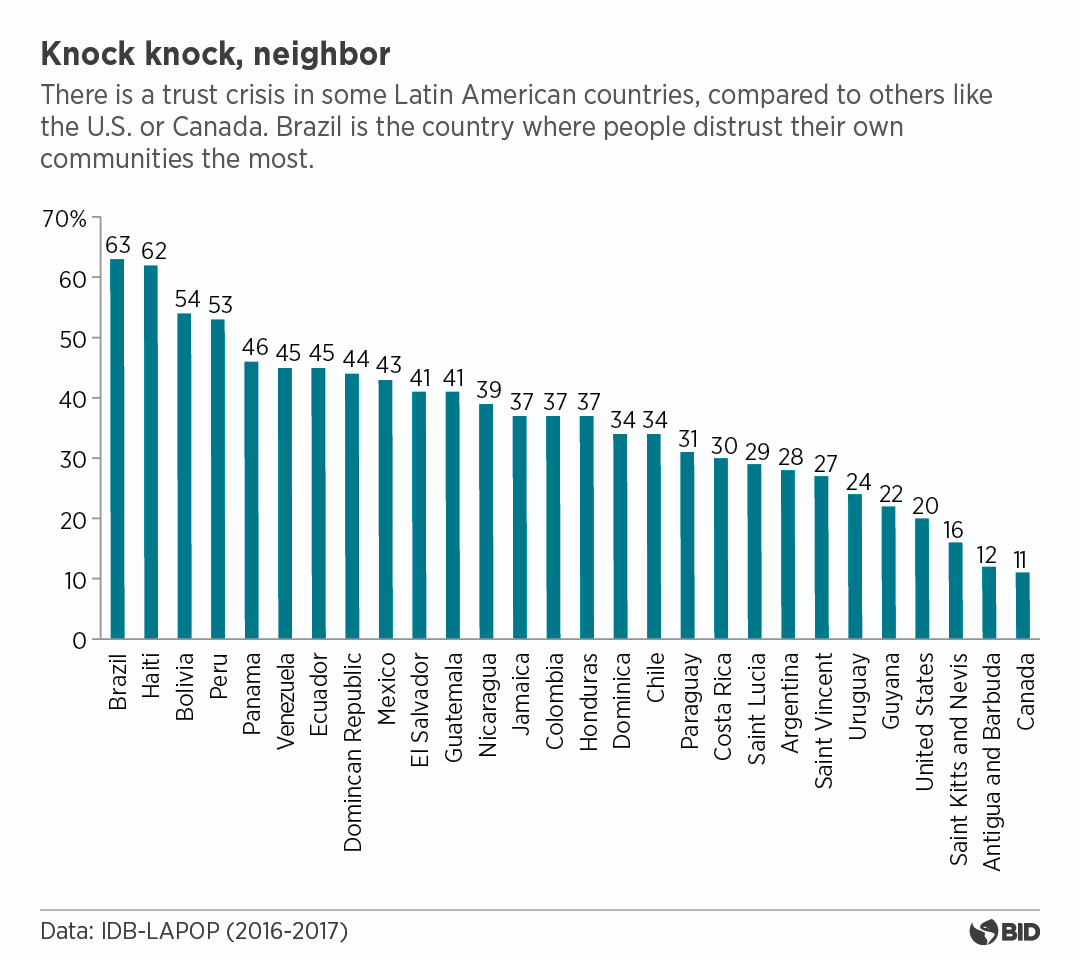 The lack of trust has big implications on how governments spend their money, as shown in the 2018 IDB flagship report Better Spending for Better Lives: How Latin America and the Caribbean Can Do More with Less. Keefer teamed up with fellow-IDB economists Carlos Scartascini and Razvan Vlaicu to better understand the relationship between trust and fiscal budgets. This can be a hard thing to do. Most of us want quality public education, generous pensions, free healthcare, nice roads, safe neighborhoods and clean air. But budgets are exercises in tradeoffs. Unless you are willing to pay higher taxes, more money for education means less money somewhere else.

Do citizens really understand tradeoffs? And how does the region’s lack of trust play into the equation? To find out, IDB investigators worked with Vanderbilt University’s Latin American Public Opinion Project (LAPOP). LAPOP surveyed 5,800 respondents from Chile, Colombia, Honduras, Mexico, Panama, Peru and Uruguay about trust and budgets.

People want better services, but they are reluctant to fund government programs to get them. Take the case of policing. In a region of high crime, unsurprisingly 54 percent said they wanted more money allotted to the police. However, when asked if they would be willing to pay higher taxes for it, only 40 percent agreed. The gaps were even bigger for other spending items. Over two-thirds of respondents favored more money for education but only one in four wanted the government to spend more on education.

“Latin Americans oppose higher taxes to finance greater spending on education and redistribution, even though the region does less of both compared to other countries with similar or higher incomes per capita,” said Keefer.

What about trust? The survey revealed links between distrust in government and distrust in their communities. 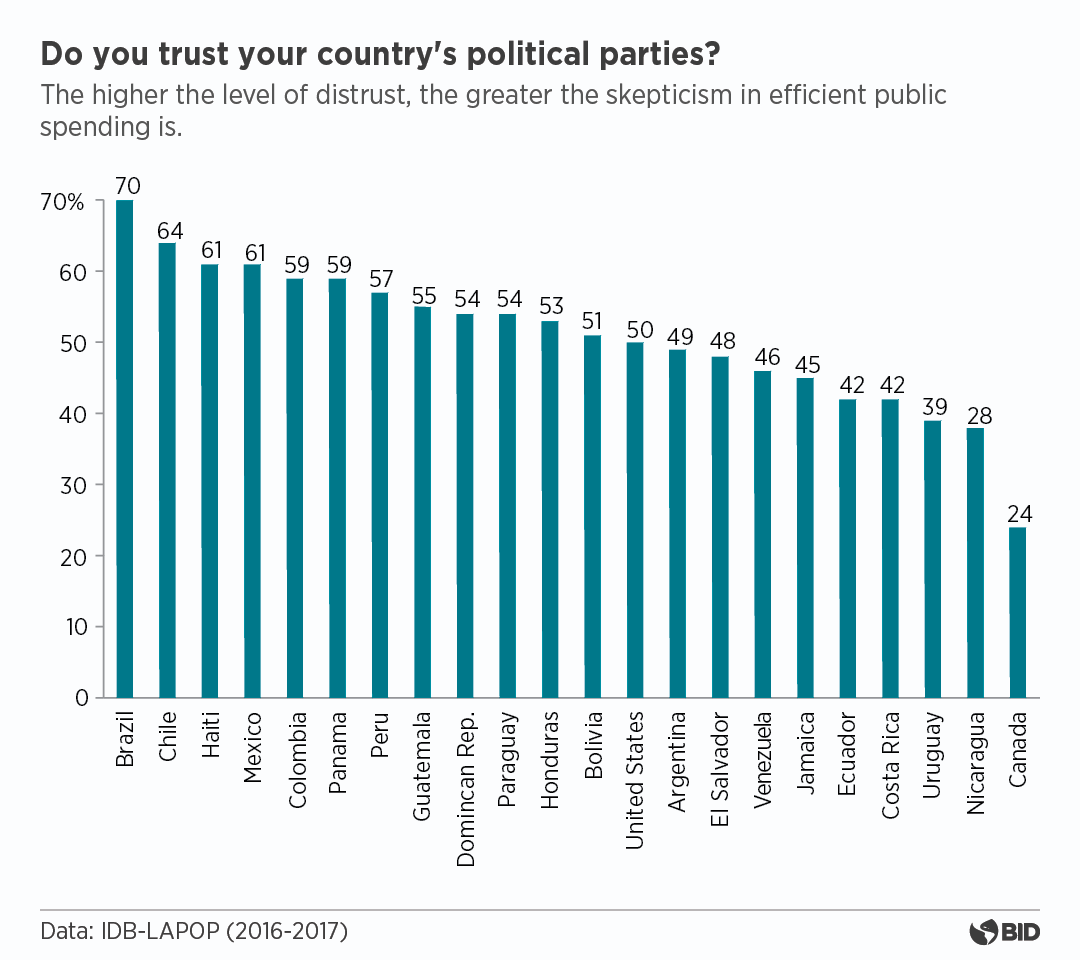 IDB-LAPOP survey probed respondents’ expectations of public officials, people in general, and family members. On a 4.0 scale, trust in family was 3.4. Trust in general was 2.4, and trust in politicians delivering on their promises was 1.9.

Researchers then went back to the responses on more spending for policing, education and combating inequality, and looked for differences in spending preferences between citizens that were more trusting and those who were less so. Sure enough, respondents who do not believe politicians and public officials will fulfill their promises are less likely to prefer policies that favor expanding the role of government in education, policing or income redistribution.

The results are what Keefer calls the “give me the washing machine now” syndrome that impacts budget spending. Citizens prefer government programs that provide immediate benefits—transfers and pensions—over spending that has benefits in the longer term, such as education and infrastructure. This hurts future growth and productivity, and it makes budgets more rigid: it is hard to cut back on civil service payroll when economic conditions demand less fiscal spending.

How can officials regain the public trust? First off, by becoming much more efficient in how tax money is spent, and by making sure voters understand where their money is going.

“Trust in government might increase if governments more clearly and frequently communicated that they pursued the policies they promised to pursue,” said Keefer, “and that the policies had the effects they said they would.”