Skip to main content
How could we end corruption?
Home

How could we end corruption?

When we asked Armando Lara –tax and anti-money laundering expert– what is his impression of Latin America after the recent corruption scandals, he was very clear: "Corruption made countries poorer. The economies grew, but wealth did not permeate downwards. The well-being of the population did not improve."

The data seems to support his analysis. Corruption has had a corrosive effect over citizens’ confidence in public institutions. According to the Latinobarómetro 2017, 53% of Latin Americans consider that their government has a poor performance in the fight against corruption and only 30% feel satisfied with democracy.

Also, experts in the matter point out that the unprecedented number of corruption scandals in Latin America and the Caribbean threaten to erode the foundations of much of the region's economic well-being and political stability, as well as the rule of law.

In contrast, when European and Asian countries improved their governance and anti-corruption policies halfway through the last century, it tripled their GDP per capita relative to most Latin American countries.

To face the challenges posed by the corruption scandals afflicting the region, the IDB convened some of the world's leading anti-corruption experts. Between June 2017 and September 2018, eight specialists in taxation, extractive industries, infrastructure, civil society, governance, institutions, private sector and information technologies, prepared an independent report to explain the consequences and offer possible solutions from multiple angles.

The panel of experts agreed that the recent regional scandals indicate that corruption in Latin America and the Caribbean is systemic and encompasses a complex network of methods and mechanisms on a large scale. The devices to divert funds have become more sophisticated, and the governance and control systems of the region are not sufficiently developed to face these new challenges. At the same time, in many countries, "petty corruption" has also become more evident, which, even though is not conducted in the same way as large-scale corruption, has a direct impact on every citizen.

Some countries are in a better position than others to deal with these challenges. Uruguay, Chile and Costa Rica have a healthier standing as they have improved in recent decades their legal system and institutions in order to strengthen their governance and control of corruption. Colombia and Paraguay have also substantially improved.

"There are common characteristics in these three countries (Uruguay, Chile and Costa Rica) of strong leadership, improved institutional quality and an emphasis on having a modern and responsible state," says Daniel Kaufmann, member of the expert panel.

The panel of experts points out that during the last decade, most of the anti-corruption initiatives conducted in the region have been partial, irregular and with a stronger focus on legislation rather than implementation. "The report is a call to action. In that sense, the report indicates that there is no need for more laws or agreements or anything like that, what is needed is implementation," says Roberto de Michele, who was the focal point on behalf of the IDB to facilitate the work with the experts. 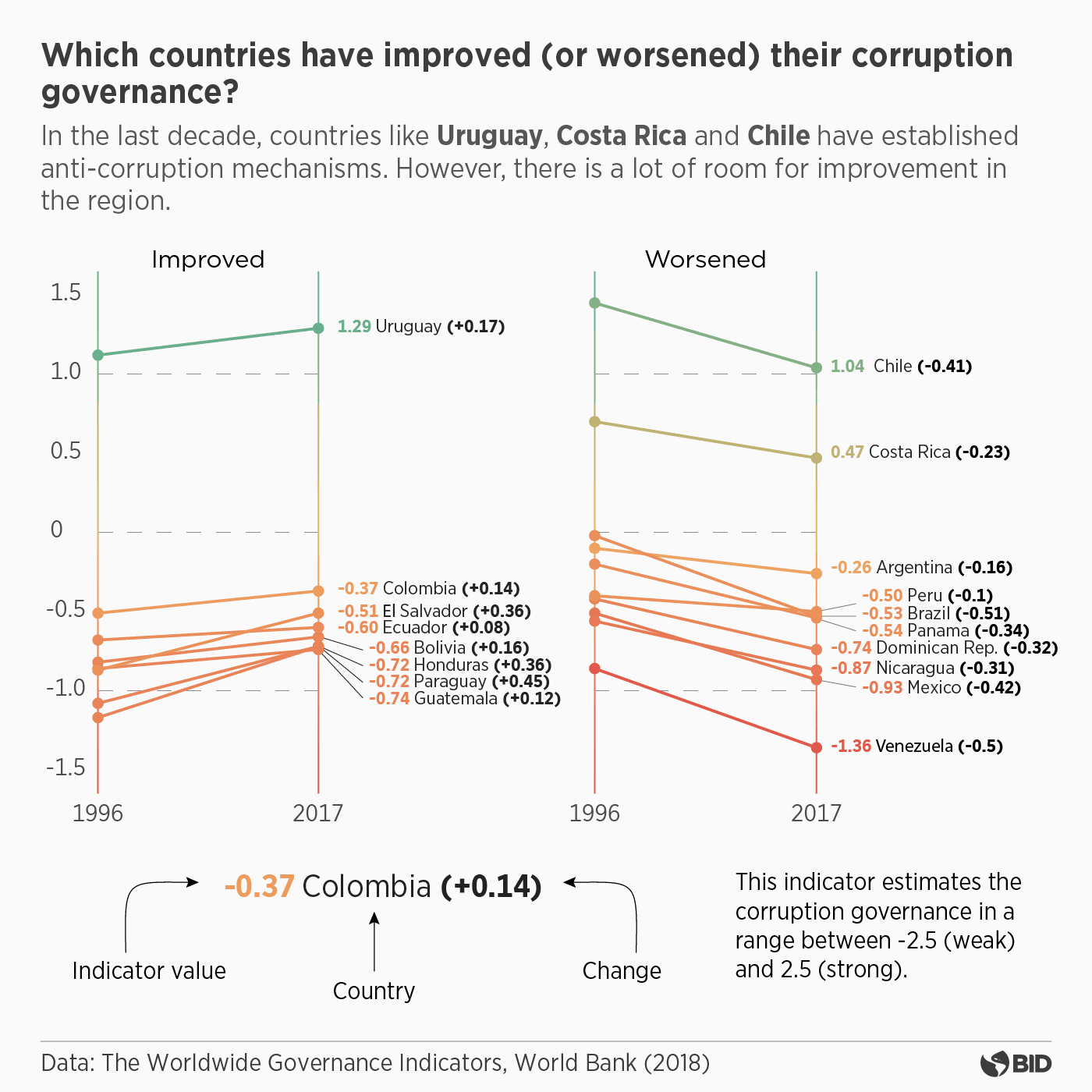 The anti-corruption agenda could be revitalized and expanded through a series of key actions. These include:

●    Guaranteed resources and independence for the judicial system

●    Promotion of innovative approaches for the collaboration in judicial investigations

●    Changes to the financing of political campaigns and increased transparency

●    Enabling and expanding the use of technologies to fight corruption

●    An assessment of the depth and extension of corruption at all levels, among other actions.

The experts also highlight the importance of the way in which these reforms are implemented. International rules on transparency and integrity serve as a roadmap for reforms at the national level. However, for them to succeed in curbing corruption, they must go beyond improving the technical quality of laws or public integrity policies. It is necessary, the experts point out, that the reforms engage the civil society and the private sector.

“Corruption made countries poorer. The economies grew, but wealth did not permeate downwards. The well-being of the population did not improve,” says Armando Lara, member of the expert panel.

What can civil society do?

There is no doubt that the active participation of citizens is fundamental to prevent corruption and promote transparency. Now, with social networks and increased access to information, there is an enormous potential to strengthen integrity in their countries.

"Judge Moro (chief prosecutor of the Lava Jato/Car Wash case in Brazil) always says that he was able to do what he did because of the support he felt on the streets," says Delia Ferreira, president of Transparency International and member of the panel of experts.

Citizens can also collaborate with civil society organizations, which have done an exemplary work to promote transparency and public integrity through the advancement of access to information laws, monitoring government spending, tracking campaign funds and reporting acts of corruption.

The role of these organizations has been so valuable that, in several countries, a new collaboration strategy is being tested. Through the so-called Integrity Pacts, governments sign an agreement with civil society organizations to monitor public contracting with private companies. During the process, the auditors open all their reports and materials.This measure has been implemented in 15 countries and in more than 300 separate occasions.

The panel of experts also highlighted the role of the private sector. As they point out, scandals tend to place a spotlight on the corrupt individuals, and unfortunately ignore the fact that for every contract obtained with a bribe, there were other businesses who refused to pay for them. Among several ideas, one of the experts’ recommendations was for the creation of collective action strategies by the private sector to ensure that integrity rules are adopted progressively by businesses.

The report makes clear that technology and innovations will play a key role in promoting transparency and avoiding corruption in the coming years. In the legal sector, innovations such as plea bargains --which was an essential instrument in the Lava Jato case for the persecution of the politicians involved in the scheme-- could be adopted.

However, technological tools to report and detect the laundering of funds have the greatest potential to amplify the fight against corruption.

In the opinion of Beth Noveck, director of GovLab and member of the panel of experts, technology will play a key role in increasing public integrity.

"I am very hopeful that, with the help of innovation, data and technology, and a real commitment to democratic values, we have the potential to really take action against the problem of corruption," says Noveck. "Now we have the tools to determine with some degree of precision where some cases of corruption are occurring and to use collective intelligence to find good solutions to stop it."