Skip to main content
Global Microscope on Financial Inclusion: How does your country rank?
Home

Global Microscope on Financial Inclusion: How does your country rank?

Petra Guevara Martínez lives in a rural area of Mexico with few economic opportunities. Her community is several hours away from the nearest city and when there are jobs, they are not well paid. Faced with this challenge, in 2002 she created a company that makes clothes, beds and costumes for dogs. It began as a small workshop and over the years it grew slowly.

However, in 2014 the company's growth trajectory changed. Petra got a loan for producers from rural areas, with which she bought machinery and hired more people. In just one year, the company tripled its production and now distributes throughout the country.

Petra's story is not unique. In Latin America and the Caribbean, access to credit has helped thousands of businesses grow. But there are still millions of people without access to financial services in the region. Part of the problem is inadequate infrastructure for financial inclusion ranging from the lack of basic services such as access to the Internet to more complex measures such as regulations for the protection of consumer data to prevent fraud or phishing.

To help countries improve their citizens’ access to financial services, the Inter-American Development Bank, through IDB Lab and IDB Invest and in collaboration with The Economist Intelligence Unit, publishes since 2007 the Global Microscope, a study which compares the progress of 55 countries in promoting greater financial inclusion.

The study analyzes dozens of indicators mainly in areas regarding policies used by governments and regulatory bodies to promote financial inclusion, although it also considers other factors such as the number of people with internet access or ATMs. The last edition also includes 11 indicators focused to close the gender gap in financial services.

“The value of the Microscope goes beyond the rankings. It is a tool that provides unique, detailed and updated information on financial inclusion in many countries around the world. It's not about which country is ranked first and which second, but what can we learn from each other,” says Sergio Navajas, one of the creators of the study and a financial inclusion specialist at IDB Lab, the IDB Group's innovation laboratory.

In the recent edition of this study, in which ACCION and the Bill and Melinda Gates Foundation also participated, four Latin American countries lead the table: Colombia, Peru, Uruguay and Mexico. 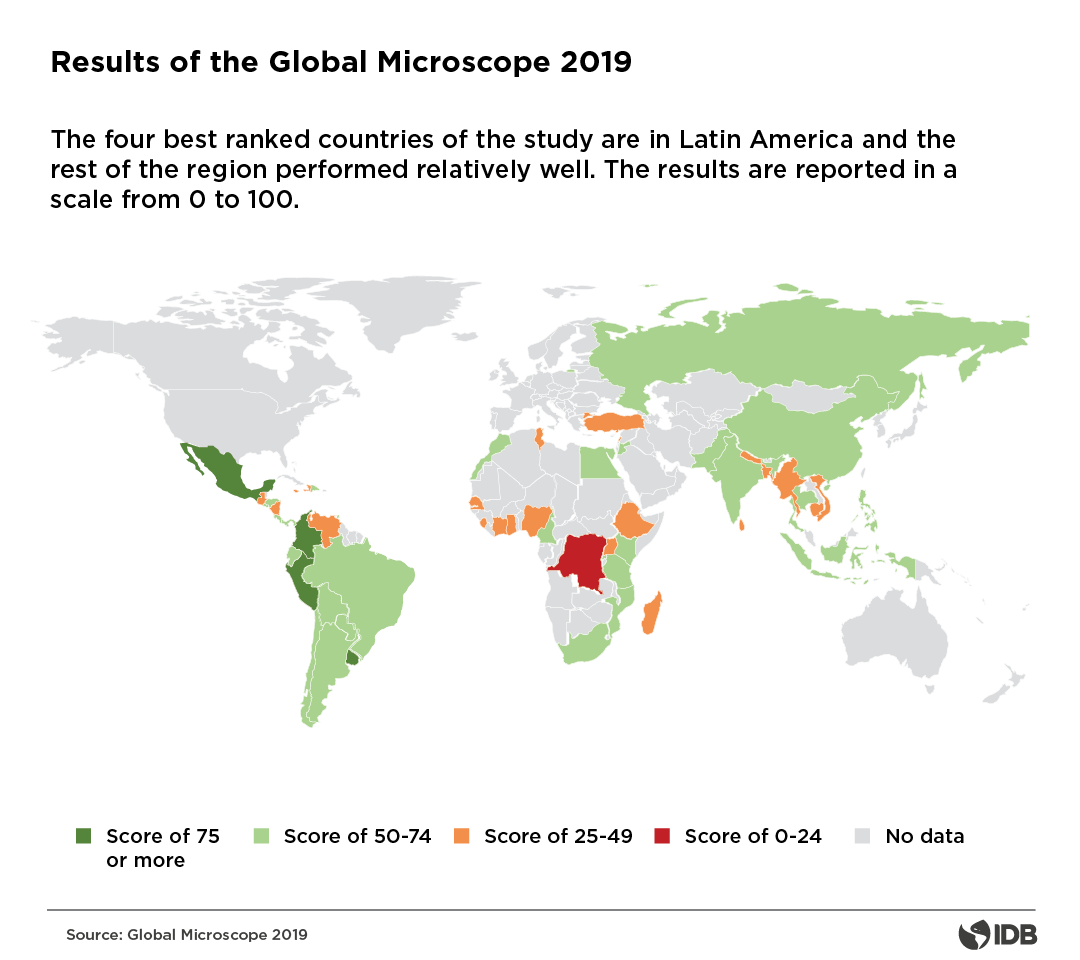 Among the things that helped these countries solidify their position at the top of the list is the creation of a regulatory environment to help make quick and safe tests of financial innovations,  such as crowdfunding and banking investments in fintechs in Colombia; an improvement of the framework for data protection in Peru; and a new infrastructure for digital finance in Uruguay.

In the latest edition of the Global Microscope, measures on financial inclusion of women were also included and the data suggest that much remains to be done to close the gender gap. The vast majority of the countries in the study do not have data disaggregated by gender, only one third of them include a gender approach in their financial inclusion strategies and almost none have established clear objectives as part of these strategies.

Practical impediments, such as access to identification, internet and mobile phones, also limit the ability of women to take advantage of the growing digital channels for financial inclusion.

“Understanding where we come from, how we are doing and what needs we have are very important to be able to create the mechanisms that allow us to access the financial products and services we require,” says Marcela Zetina, director of Open Innovation and Open Banking at BBVA Bancomer Mexico.

Part of the problem is the lack of women in leadership positions in financial institutions and regulatory bodies. In 37 of the 55 countries analyzed in the Microscope, women represented less than 25% of those responsible for making decisions in financial regulatory bodies. In only one country women occupied more than half of these decision-making positions: Bolivia, where the national parliament also has a female majority.

For regulatory bodies and financial institutions, choosing to have a greater representation of women at all levels is a good financial decision. According to an IMF study, greater female participation is associated with a better capacity for financial recovery. "We are, naturally, much more responsible due to all the cultural and societal burdens we have to deal with, and responsibility is something that relates very well to financial products and services," says Marcela Zetina.

Petra, which obtained the loan as part of a program to include more women from rural areas to the financial system, recognizes the value of such initiatives. "I thank the financial institution that gave me the loan in name only, because I know that behind it there are many people who make it possible for people like me, who live in regions that are very far from the cities,  to have work," she says.

If you want to read the full Global Microscope report, download it here.