Creativity to Inspire the Caribbean Economy

A lonely girl in Barbados needed to draw. It was an “urgency,” she says. Starting with one simple notebook, Sheena Rose would eventually turn her house into an art-filled exhibition space, attracting hundreds of visitors and international attention.

That was only the beginning. In a country without a modern art museum, Rose took her creations to the city streets, saw them featured on book covers and traveled south to create billboards in Suriname. She exploded on social media, and her work eventually reached international collections and art biennales.

Leading by example, Rose believes that the region’s talent can spur economic growth.

“I’ve been doing this for years to prove what creativity can do, to show how to be successful,” she says. “Dream, don’t give up and keep working. People are listening right now.”

The Caribbean has already distinguished itself on the international scene for its creative flair, from festivals to food to music. It is the birthplace of reggae and the source of inspiration for award-winning writers such as Derek Walcott and Junot Díaz.

According to UNESCO data, cultural goods amounted to more than 16% of Barbados’s total exports in 2016 – the highest percentage among all countries analyzed. Behind that figure is a steady trend of growth in recent years. Other Caribbean nations, such as Saint Lucia and the Dominican Republic, also posted strong numbers.

Still, the business potential of the region’s creative industries has not been fully realized.

1 of 6 Sheena Rose’s (@sheenaroseartist) work can get pretty personal – and she is not shy about it. “I am a black Caribbean woman from Barbados, and I strongly identify with that,” says the artist, who lives in the easternmost end of the island, St Philip. “Do not look for me to make it easier for you. I say what I have to say.” ⠀ Through drawing, painting, video, and performance, Sheena tries to create art that challenges the viewer in some way. “I always want the viewer to learn and feel something from my work. Most people find the work refreshing and honest.” ⠀ Follow @sheenaroseartist’s story this week on @vogue.

According to Launching an Orange Future, an in-depth IDB study about creative entrepreneurship in Latin America and the Caribbean, nearly 40% of business failure among those surveyed was due to lack of financing and strategic planning. It’s a reality that Rose has had to contend with, too. She says she had to learn from friends about how to register her business, handle taxes and build a solid foundation for her creative work.

“Artists don’t see themselves as business, we just see self-expression,” she says. “You need to understand the nature of the business and make the right decisions for your career… Artists need to promote themselves and get more critical. We need to be educated, to have workshops and advisors.”

Alongside its industry studies, the IDB has supported initiatives to enable creative entrepreneurship and growth. Caribbean musicians have learned how to play to the tune of innovation with blockchain technology, and startups have found an innovation hub at TEN Habitat in Barbados.

Listen: How musicians can grow their income and audience reach in a technological transformation era

Tourism is also a bedrock industry in the Caribbean, accounting for more than 10% of the region’s GDP in 2018, according to the World Travel and Tourism Council. For Barbados, tourism is even more important, representing nearly 35% of the national economy.

Tourism and the creative industries are increasingly intersecting. The cuisine scene in Barbados made it the first Caribbean country to earn a Zagat rating from the influential restaurant rating system. The island nation has also marketed the star-power of its most famous singer to attract further visitors; the campaign has been dubbed “the Rihanna effect.”

For Rose, part of the effort to rewire the local art scene is to accept the island’s potent touristic lure, but to not have it condition the country’s creative products. She argues that tourism could be used to show Barbados and the Caribbean beyond just leisure, and instead expose people to an alluring creative and cultural landscape. 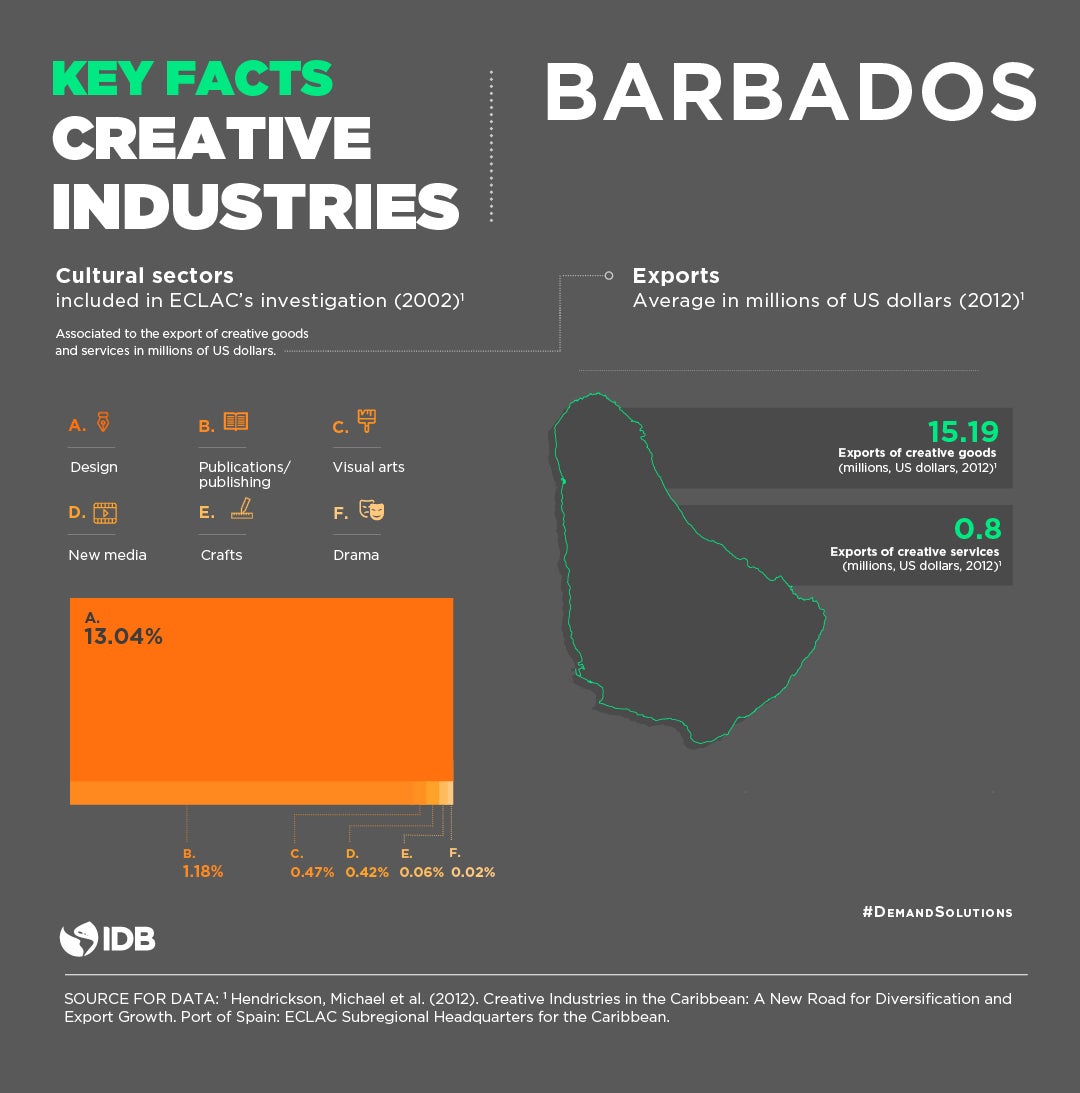 “I see ourselves becoming too concerned about the visitors. Tourism brings money to us… and we will attract more tourism, but also investors, business people, collectors, celebrities, and not just people that just want the sea and the sun,” she says.

It’s a role that isn’t confined to art, but mirrors all the creativity Barbados has to offer. One of the island’s most promising creative industries is design. The IDB’s analysis of creative economies in the region lists as the most important export among creative goods, a fact echoed by the United Nation’s Creative Economy Outlook, which highlights design-related export’s increase from 9 to 19 million dollars between 2005 and 2014.

“I want to see success. I’m going in the direction of being an ambassador, of encouraging others to believe, to do what they’ve got to do: dance, music, singing, fashion… All I am wearing right now is Barbadian. This is me encouraging them: you are as good as anybody else out there.”