Combatting gender-based violence during the pandemic

Carmen, who requested a pseudonym to protect her identity, is a 38-year-old Honduran. She is also a five-year survivor of physical and psychological abuse by the father of her child. In June, to escape the violence, Carmen was forced to leave her son behind. She went to the police and the courts, but due to COVID-19, access to facilities was restricted and many services were interrupted. She had lived with fear, humiliation and despair. Now, she felt a sense of impotence and resignation.

According to the Gender Equality Observatory for Latin America and the Caribbean, which has analyzed national surveys from six countries, between 60% and 76% of women have experienced gender-based violence. One in three has been the victim of physical, psychological or sexual violence committed by a partner. In some cases, the violence becomes femicide.

The region has registered an alarming increase in this scourge during the pandemic. In Chile, calls to the national domestic-violence hotline increased by 70% in the first weekend of quarantine. In Mexico, there has been a 60% increase in complaints of gender-based sexual violence during the pandemic. Colombia’s victim-support hotline has received 91% more calls than the previous year. The surge is due, in part, to risk factors such as confinement, other restrictions on mobility and isolation. But it is also the result of the public and private sectors’ limited capacity to respond, particularly in the COVID-19 context.

Gender-based violence is multifaceted problem that requires a similarly multifaceted response. Micaela García is a tragic posterchild. On April 1, 2017, the 21-year-old physical-education student was returning home after a night of dancing with friends in Gualeguay, Argentina. She was raped, her throat was slashed and her body was dumped in a field by the side of the road.

García’s murderer had been in prisoner for the rape of two young women, but was granted probation. The system that was supposed to have protected her had failed.

According to data from the Women’s Office of Argentina’s Supreme Court, there were 252 victims of femicide in the country in 2019. At the regional level, the largest country, Brazil, registered the highest number of femicides, 1,133. However, El Salvador had by far the worst rate – more than 1,000 deaths per 100,000 women. 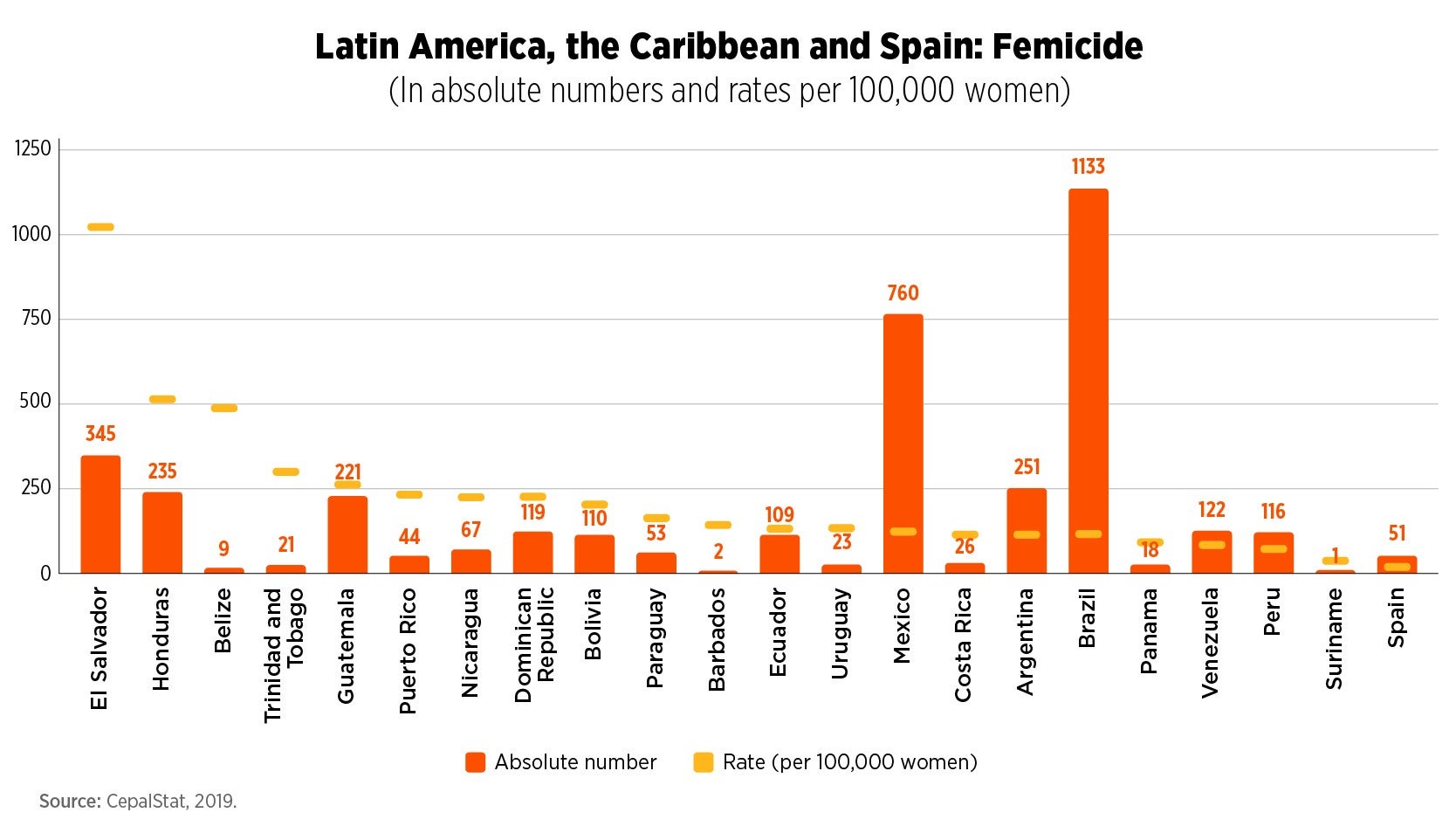 Coordination among a range of players who are tackling the problem from different angles is necessary to achieve results, says Caridad Araujo, head of the Gender and Diversity Division at the Inter-American Development Bank (IDB).

“Coordinated initiatives between different sectors and levels of government must be an integral part of the plan to end, once and for all, the gender-based violence that affects millions of women. Not only because it is the right thing to do, but also as a necessity for the growth and sustainable development of the region,” says Araujo.

“Attention to this issue also requires promoting alliances and synergies that bring together the abilities and experiences of governments, the private sector, civil society and academia.”

In Argentina, the murder of Micaela García led to the Micaela Law, which established mandatory training in combating gender violence for all public officials in the executive, legislative and judicial branches, among other measures.

Building on this platform, the country’s Ministry of Women, Gender and Diversity developed the Program for a Comprehensive Approach to Extreme Gender-Based Violence, partnering with the Ministry of Justice and Human Rights and the Ministry of Security. The IDB was there to provide technical assistance. The Program seeks to establish common guidelines and responses for addressing the challenge of femicides and transfemicides, including avoidance of interventions that revictimize, promotion of collaboration and coordination among all levels and agencies, and integrated information management.

More multisectoral and collaborative strategies, and effective, committed implementation of those strategies, are needed across the region.

Innovating for a Way Out

Then, there’s the COVID-19 effect. What happens when a victim is isolated and quarantined with her attacker? Where and how do you seek help when face-to-face interactions with authorities are gone and when social services have been stretched to the breaking point?

It was this type of initiative that allowed Carmen, in Honduras, to access the support her situation demanded. One day, she turned on the television and saw an advertisement aimed at women like her. It prompted her to seek help again, and she was directed to available services. After calling a 911 hotline, Carmen received social, psychological and legal counseling. About two months since she had fled her attacker, she managed to regain custody of her son.The TV commercial that Carmen saw is part of an awareness campaign led by the National Institute of Women of Honduras, the Ciudad Mujer program, the IDB and the Behavioural Insights Team, a UK-based organization that generates and applies behavioral sciences to inform policies and improve public services.

“This is a scientifically grounded campaign that calls for action through behavioral changes and invites women to seek support to get out of a situation of violence,” explains Rosa de Lourdes Paz, from the Ciudad Mujer program of Honduras.

The campaign addresses the main biases that hold back victims of gender-based violence from seeking help: fear of uncertainty, misidentification of violence and lack of a safety plan.

In Honduras, almost 23% of women have suffered violence perpetrated by an intimate partner. Less than 20% seek help from institutions.

Ana Aminta Madrid, the country’s minister of women, says the communication effort has made a difference:

"In our country, historically, violence against women had been naturalized and normalized. This campaign has allowed us to recognize three points: First, that any woman can live in a situation of violence, that it isn’t just isolated or specific cases under certain conditions. Second, that women who go through the experience feel fear, shame and guilt, and that is normal. And third, that the violence they experience is not their destiny. They can ask for support, and their self-determination has value and is worth it.”

To learn more about gender-based violence in the context of the pandemic, click here.

The coronavirus affects women differently. Download our publication (in Spanish).