Colombia, like most countries in Latin America and the Caribbean, faces a significant challenge to its development: the so-called ninis, the name by which youth who do not work nor study are known.

It is estimated that the number of ninis aged between 15 and 24 years old amounts to 582,000 in the main cities of the country, such as Bogotá, Medellín or Cali, according to data from the Department of National Planning. Many of them have little work experience, low education levels and have not developed important skills to integrate into the workplace. And, although many of them would like to work, men in this age range face an unemployment rate of 19.2%, more than double the national average, and women of 23.5%, according to official figures of 2017 .

The problem is that in most Latin American countries, including Colombia, employment programs focus on paying for activities, such as job training programs, instead of prioritizing on the end result: getting a job. For these young people, a first formal position can be the gateway to a future where they have a stable employment. 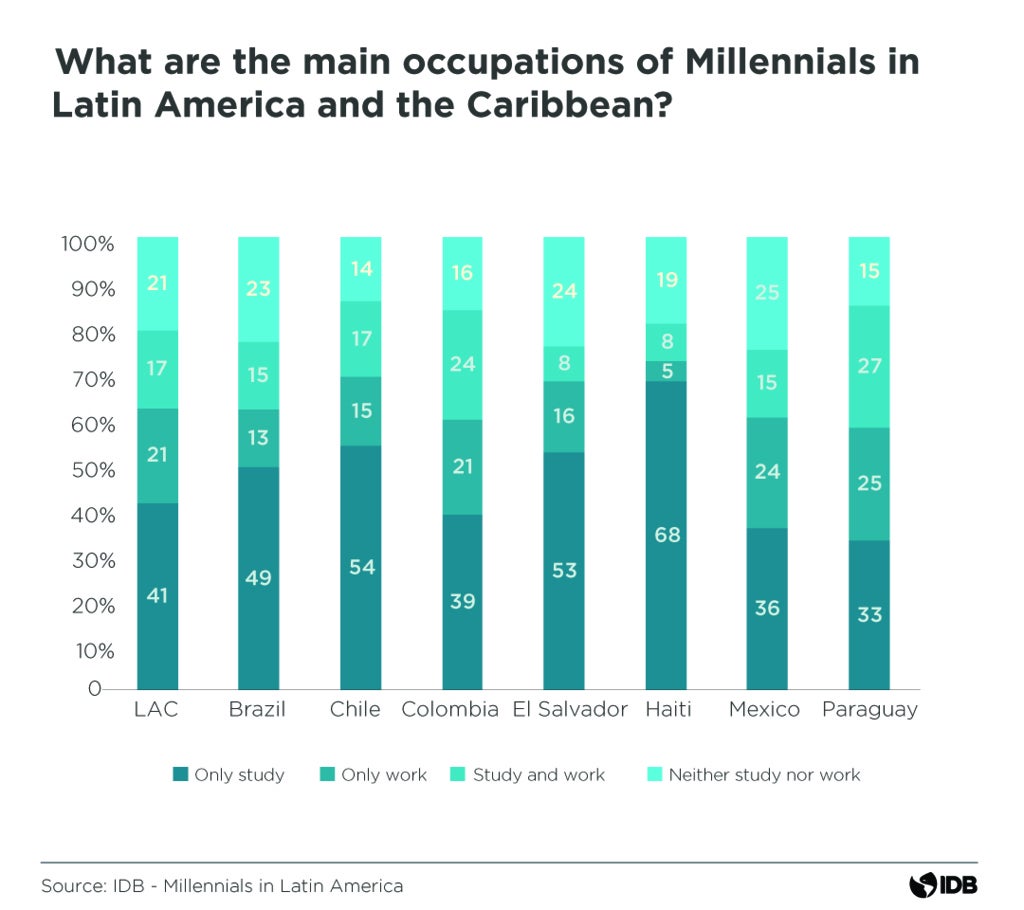 One of the challenges is that many of these training programs are not aligned with the specific needs of the companies that are hiring. In addition, the groups vulnerable to unemployment such as ninis, victims of the armed conflict and mothers with small children below the poverty line, have additional needs or large skill gaps that require more attention.

Faced with this challenge, IDB Lab, the government of Colombia, the Swiss Economic Cooperation (SECO), and the Corona, Mario Santo Domingo and Bolivar Davivienda foundations, developed a pioneering program in Latin America and the Caribbean to increase the participation of vulnerable populations in formal jobs. Globally, the most successful employment interventions for vulnerable populations have managed to place between 20%-32% of them in a formal job; however, this pilot project managed to place 46% of its beneficiaries.

How does it work?

The program works through a Social Impact Bond (SIB), an innovative financial instrument that invites private investors to join efforts with the government to carry out social projects. Through this mechanism, the government and private investors establish a set of goals for the impact they want to achieve and select an intermediary, usually an NGO or company, to run the project.

Once the objectives have been defined, the investor gives an advance to the executor to carry out the project. Along the process, an external agency analyzes the results and determines how successful the executor was in meeting the goals. If the results are positive, the government pays the investors their capital plus an interest. If the agreed goals are not met, they don’t pay anything. Thus, in this scheme, the government transfers the risks to the private investors and only pays if the project is successful.

In the case of the first Social Impact Bond in Colombia, which ran from March 2017 to December 2018, the objective was to obtain a formal job for populations vulnerable to unemployment. If the beneficiaries got a job, the government and the IDB Lab (with funds from the Swiss Economic Cooperation) paid 50% of the agreed price. The remaining 50% is paid if the beneficiaries retain the job for at least 3 months. An additional premium of 10% of the total price is also awarded if they retain it for at least 6 months.

"This project is a game changer" says Christine Ternent, the IDB Lab specialist who leads this project in Colombia. "For the first time we paid for results, not for job training but to find employment for the people who most need it."

The project was initially tested on a small scale to determine its viability. Out of a total of 1855 people who received the labor intermediation, 899 (46% of the total) managed to register in a formal job. To be eligible for the pilot project, the candidates had to be unemployed youth, living in poverty or victims of the armed conflict. Of the people who got a job, 677 managed to retain their job for at least three months (79% of employees) and 309 for 6 months or more (34% of employees).

Photo gallery: our beneficiaries and the pilot project

Part of the success of the program is that it changed the way that employment programs are conducted. Previously, they were paid for each student they trained; Now, they are paid for each one that manages to get and retain a job.This has began a transformation of job training programs to make them more innovative, effective and personalized. 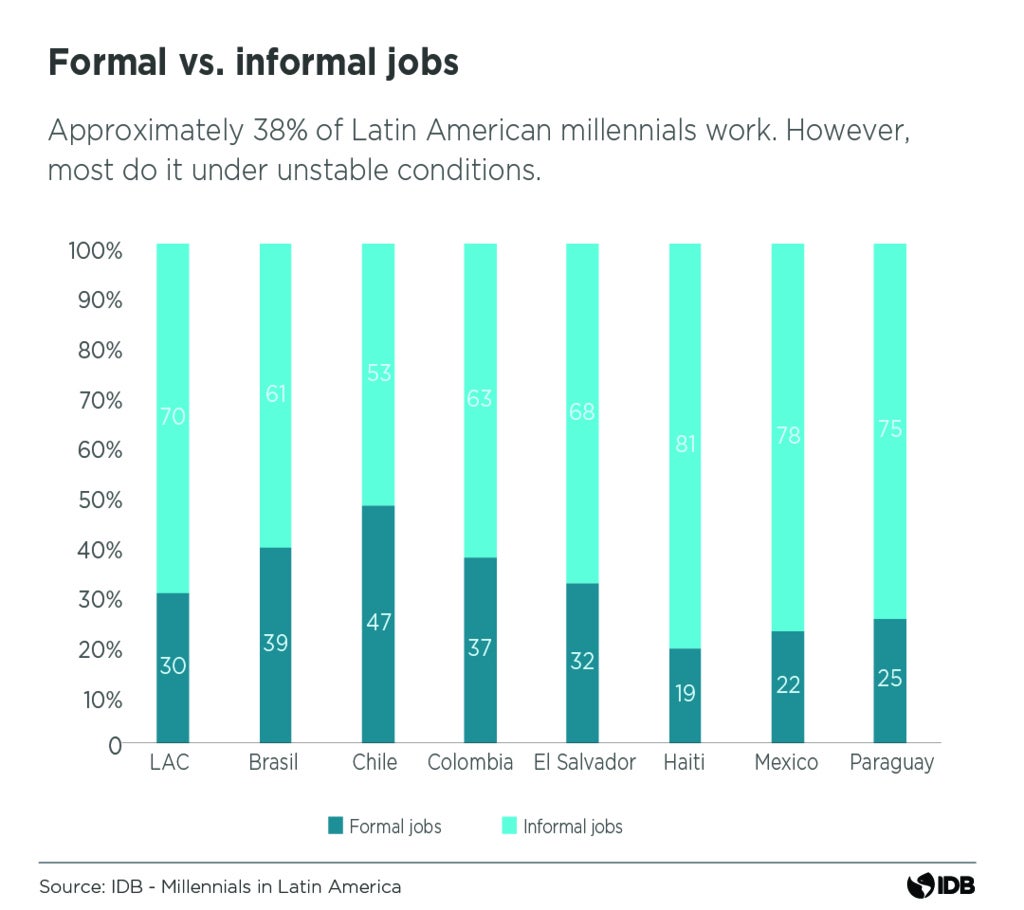 The specialist highlighted that the potential of the Social Impact Bonds is enormous. They can be used to benefit other vulnerable populations in sectors such as education, health, nutrition or teenage pregnancies. Although she also points out that it is important to conduct several pilots at small scales to learn from them. In addition, it is not a solution that can be applied to all social problems: it is necessary to have or be able to create a data infrastructure to precisely verify the results.

The Colombian employment project recently started a new Social Impact Bond in Cali and it is expected to structure a third bond for 2019 within a fund for pay-for-success projects. For the latter, a public call will be launched for interested parties to present their proposals. Based on the results of these new pilots, the viability of expanding the fund to generate a much larger scale of the Bonds in Colombia will be determined .

"My job, my passion is to ensure that people have the tools to lift themselves out of poverty and, hopefully, join the middle class." Says Ternent. "That is our job, we are not here to only contribute with marginal improvements; our job is to help transform these realities."

You can find out more about this initiative and other financial innovations here.