Download the IDB's evaluation Does Gamification Work in Education?: Experimental Evidence from Chile for free, here!

The environment in the computer room at the Jaime Guzmán School in San Bernardo, just outside Santiago, Chile, is not what you might expect for a math class. The fourth-grade boys and girls exchange high-fives, hug each other and smile broadly. One gives his partner a kiss on the forehead in excitement. They watch a pre-recorded video message of encouragement from their parents.

It is a scene of excitement and adrenaline. In the next hour, the students will take part in a live math competition against the San Luis School by using a digital gameplay system.

Primed in front of their screens, the students shout the countdown, "ten, nine, eight, seven..." The game begins. Some use their fingers to count. Others work in their notebooks, before inputting their answers into their computers. As each math problem is completed, the results are narrated in real time on a large screen.

This math bowl, of sorts, is part of the Conecta Ideas program, one of the most effective worldwide in teaching mathematics with technology.

This is backed by a rigorous evaluation financed by the IDB and the Canadian government’s International Development Research Center, which revealed that children who participated in the program reduced the educational gap with their counterparts from more affluent schools by 70 percent – equivalent to half a year of classroom work. In math education, this achievement is striking.

What is Conecta Ideas? Listen from its creator, Roberto Araya (in Spanish)

Conecta Ideas is the creation of Roberto Araya, who works at the Center for Advanced Research in Education at the University of Chile. Araya says that in math, there are no shortcuts: "If people practice, there’s clearly going to be improvement. Maybe not everyone will be a Messi, but we all improve."

The question was how to encourage students to practice boring things like fractions.

"Maybe kindergarten is fun because you play with blocks and colors. When we turn to addition and fractions and beyond, interest declines enormously, even in countries that do very well, like Japan, South Korea and Singapore,” Araya says. “Students practice a lot there, but they don’t like it."

The promise of technology bolstering education in math and other subjects has been a topic of research for decades. In Latin America, where 6 out of 10 children do not graduate with the math skills they need, realizing that promise could have profound development implications.

Araya, who holds a PhD in electrical engineering, observed firsthand the use of technology in math as he homeschooled his five children. For an hour a day, they did exercises on their computers. He saw their initial enthusiasm wane. Computers alone were not the answer, it seemed – a conclusion that is supported by research literature. 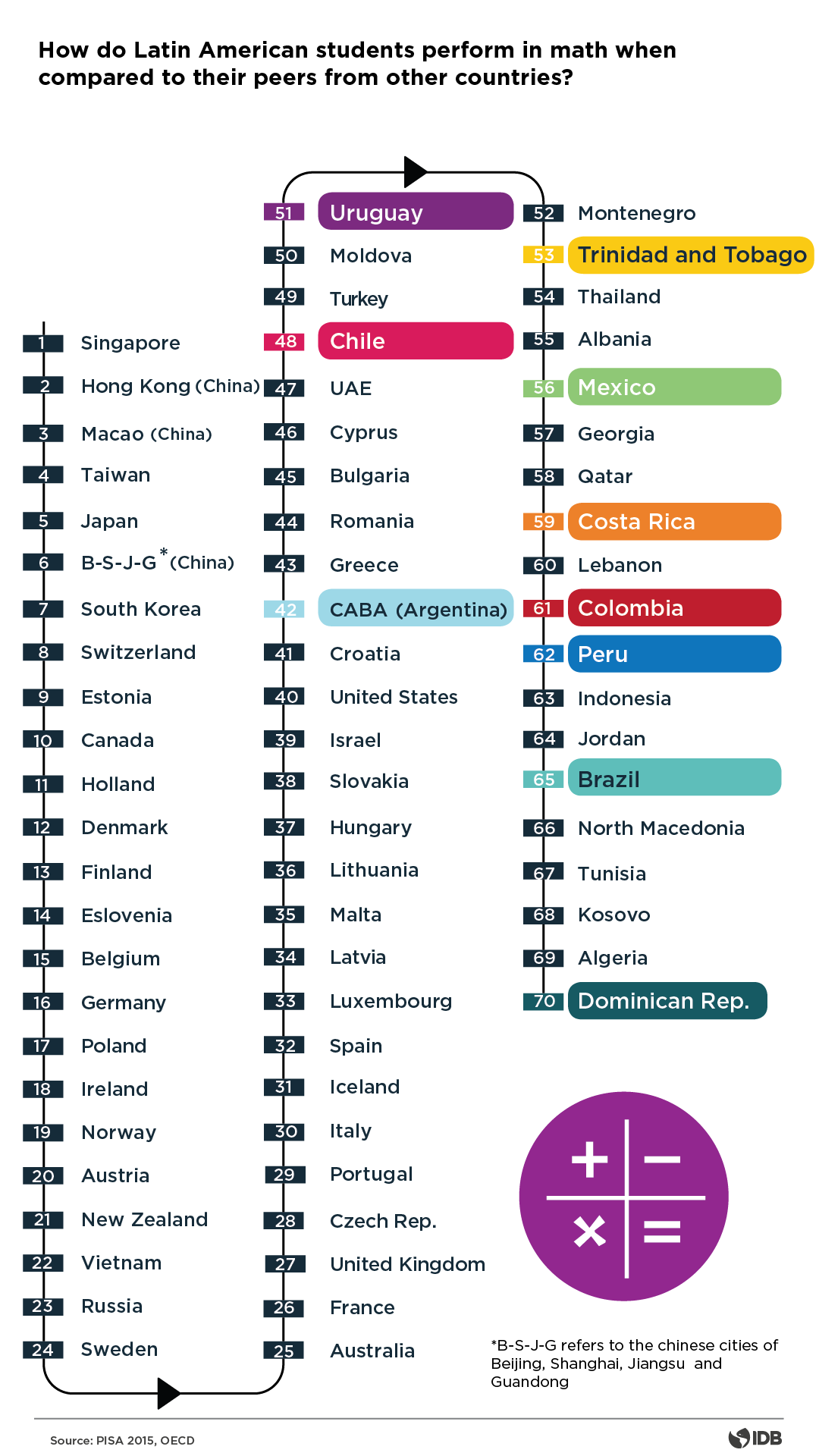 Araya designed a system in which students do two 90-minute exercises sessions in the computer lab a week. Two additional sessions are taught using the traditional methods. Students can track their progress in comparison to their peers and see how their school ranks against others that take part in the program. The system also offers points and awards. The big highlight, however, is the live battles between schools.

"This is monitoring in real time," says Elena Arias Ortiz, an IDB education specialist who participated in the evaluation. "These things are very difficult to do without the support of technology.”

Conecta Ideas falls within the education-tech trend known as "gamification,” or the use of digital games to generate healthy competition and energize students. In behavioral economics term, the approach relies on “positive reinforcement.”

However, the competitive element has also generated controversy.

"People have criticized us, arguing that we promote competition," says Araya. "The argument we make is that in democratic societies, there is competition. It's a normal part of the life of companies everywhere – and it's an important motivational mechanism for students."

Schools in the Santiago area began implementing the Conecta Ideas program in 2015. Within a year more than 30 schools were participating, including 11 in Lo Prado, one of the capital's poorest communes. 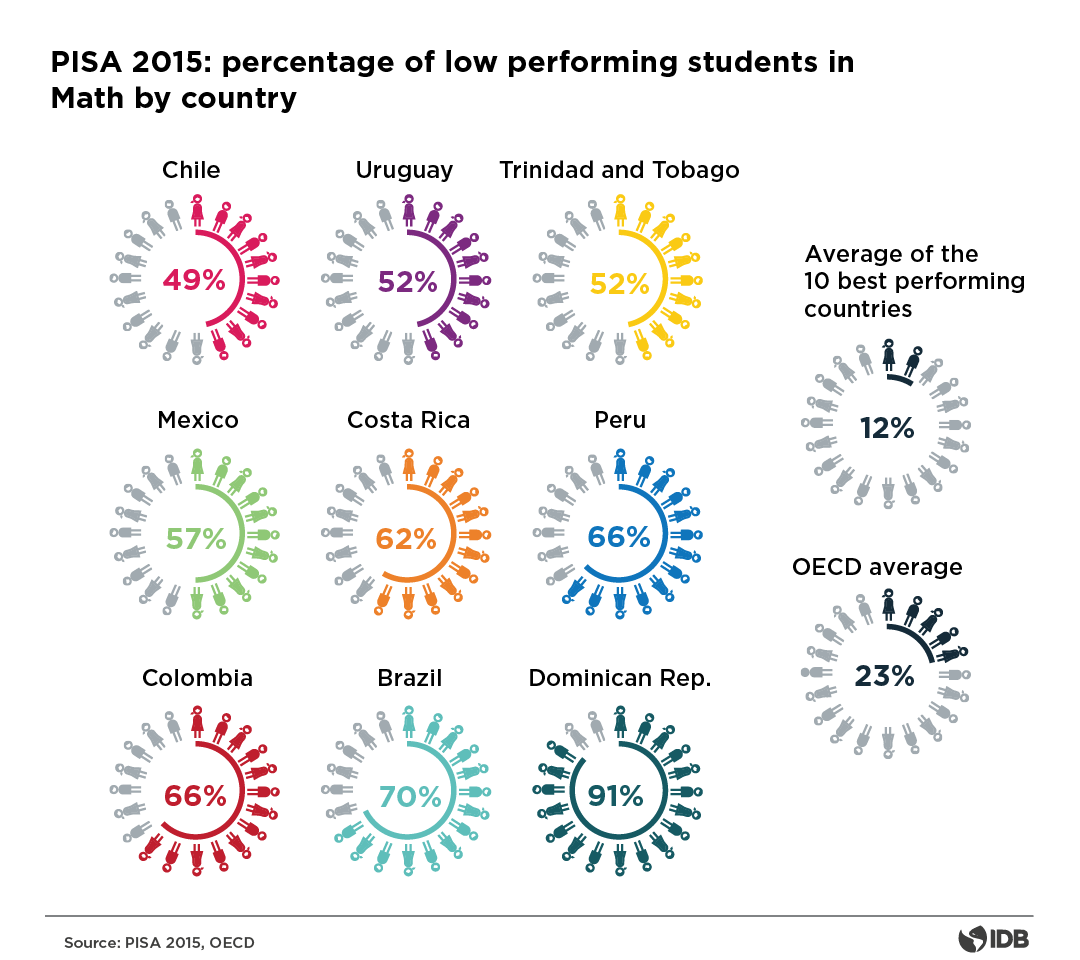 The Results are In

After having invested so much time and effort in Conecta Ideas, Araya admits that he was "a little nervous" when the IDB proposed a comprehensive assessment to see if his approach really worked.

Relying on the SIMCE (System of Measurement of the Quality of Education), which the Chilean educational system uses to track students’ performance across the country, Conecta Ideas was evaluated in 24 schools between March and November 2017. Half used the program while the other half acted as a control group.

The results were in "the most optimistic range I could imagine," says Araya. The evaluation found that Conecta Ideas had not only improved students’ math by a an equivalent to almost a half-year of study, but that it had reduced the educational gap between poor and rich schools by 70 percent.

A student from a lower-income community such as San Bernardo lags behind a student from wealthy communities by an average of one year. Significantly reducing that gap in a short period at a relatively cheap cost, using facilities that many schools already have, is “the equivalent of scoring a basket from half-court for a technology education program," says Julián Cristia, an expert on education issues in the IDB’s Research Department.

Today, the Chilean government is looking at ways to expand the program nationwide. Peru is rolling out a version of Conecta Ideas in 42 schools. In addition, researchers from Johns Hopkins University in the United States have presented a proposal to the National Science Foundation to replicate the program in Baltimore.

While the program continues to impress, Cristia also notes more work is needed; the study also revealed an increase in anxiety among students related to studying math. "The use of technology can bring unintended consequences, and we must work to eliminate, or at least reduce, these effects," he says.

Even so, the results show the new methodology can dramatically reduce learning gaps. A child from a lower-income school in Santiago is one year behind his peer from a wealthier community. Cutting this gap by half by using equipment that schools already have is “the equivalent of winning by a rout for a program that uses technology to help educate,” says Cristia.

To know more, download Does Gamification Work in Education?: Experimental Evidence from Chile for free, here!