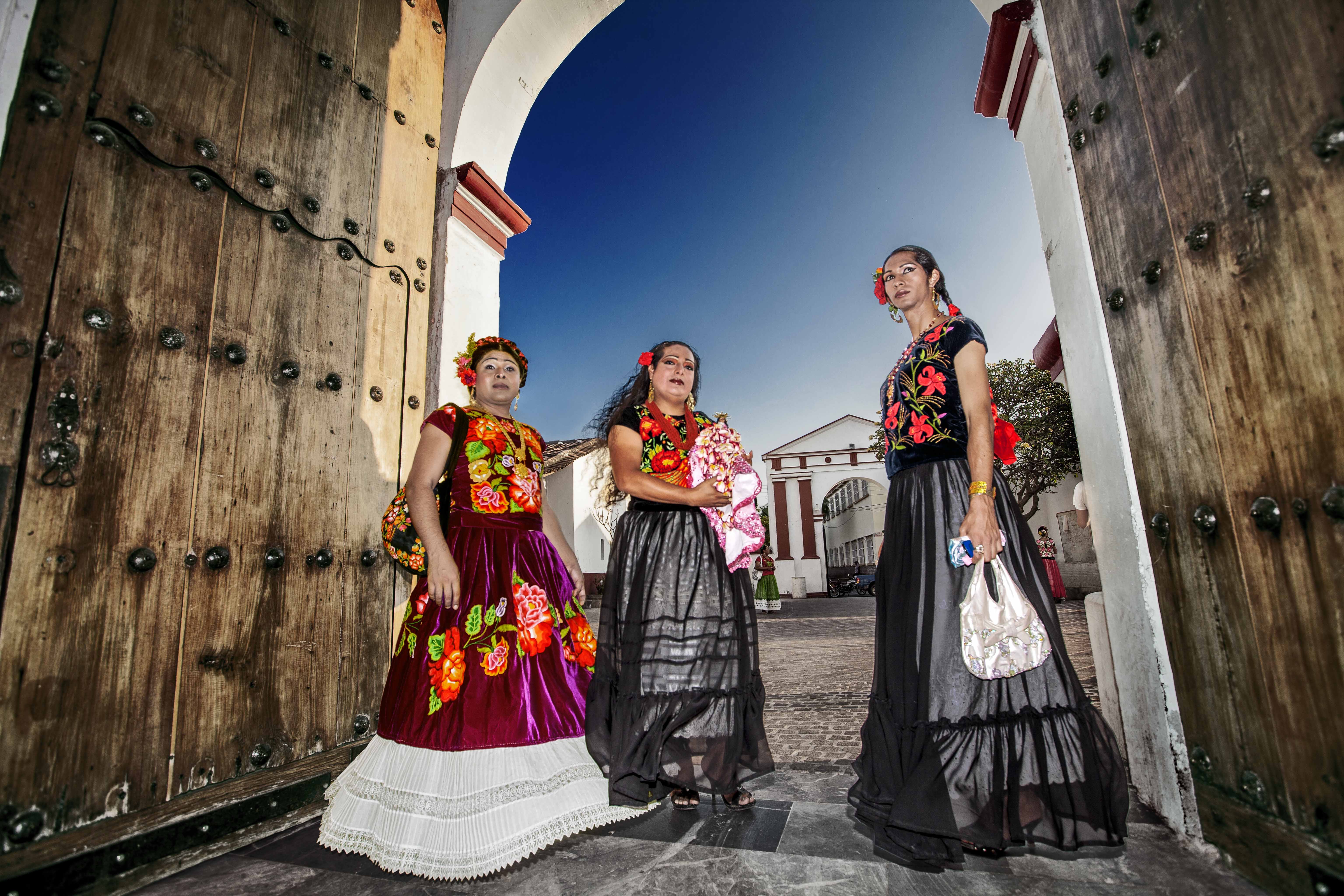 The first name that Darina Guerra had was Jacinto. She chose her new name at the age of 15, when she assumed her identity as a muxe. Darina was never afraid of being rejected for who she is, and her family and neighbors supported her in the transition to her new identity. In Juchitán, a city in the state of Oaxaca 700 kilometers southeast of Mexico City, being muxe is not synonymous with discrimination, nor of exclusion. Being a muxe is considered as natural as being a man or a woman.

"I'm muxe because I'm neither a woman nor a man. I am a man who has the thoughts of a woman," says Darina. Her mom recognized this fact about her early on. "When he was 5 years old, at the time of the Zandunga, he listened to the music and ran for one of my petticoats, put it on and danced. That's when I noticed that my son was different, that he was muxe," says Rosalía Carballo, Darina's mother.

There are two types of muxes, the gunaa and the nguiiu. The gunaa are those who were born as men but who identify as women, are attracted to men and assume feminine roles in society. The nguii are those who were born as men and are attracted to other men. The Zapotecs, the indigenous people who live in Juchitán, recognize the muxes as a third gender since they have memory. They are respected and celebrated as an integral part of a culture, centered on femininity and fertility.

"From the trenches, we have gained spaces that nowhere else have been won. This has made our culture tolerant to our identity," says Biiniza Carillo, a muxe. "The Zapotecs have a fighter culture. The man has a voice, the woman has a voice and the muxe has also earned a voice to reclaim spaces. We are fighters for our body, our space, our house," she says.

The muxes even have a defined social and economic role within the Zapotec society. Most take on traditionally feminine tasks, such as embroidery or craftsmanship, through which they preserve their culture. "The jobs we perform, from the time of our ancestors, have been only for muxes. We are cooks, embroiderers, weavers, ornaments makers and makeup artists. These are the five traditional trades of muxes," says Biiniza.

However, they are not required to work in these areas. While many muxes find opportunities in traditional jobs, others opt for other professions. "If they develop artisanal, intellectual or artistic skills, they will be recognized for those skills. Here if someone is a musician and is muxe, the important thing is that he is a musician, and he will know what he does with his sexuality, " says sociologist Marina Meneses, a resident of Juchitán.

"Here, people’s worth is measured by their work and their contribution to the community. They are not valued for their money or their sexual orientation. What matters is how you contribute to your community and that way you are accepted," says sociologist Marina Meneses.

The muxes face some limitations in the jobs they can access. Socially, it is not accepted for them to seek political offices or positions of popular representation. Many schools do not allow them to dress as women, so they drop out. When there are scare economic opportunities in traditional jobs, some opt for informal jobs.

"The muxe dressed as a woman has two options: the first is to stay in her community and opt for these culturally assigned trades, or be a social fighter, to open spaces that improve the lives of the muxes; the other, which may be a false door, is to go to another city and live under the illusion that she is going to be accepted as part of another sexual identity, "says Biiniza.

Microdocumentary: The Life of Muxes in Mexico

The challenge that Biiniza identifies for the muxes is to find a balance between the appreciation and respect they receive from their community, and in turn, find ways to overcome the traditional challenges that limit their access to academic opportunities and social participation.

The sociologist Marina Meneses believes that there are elements within the juchiteca culture that can promote greater equity and labor participation of the muxes. "Here, people’s worth is measured by their work and their contribution to the community. They are not valued for their money or their sexual orientation. What matters is how you contribute to your community and that way you are accepted," she says.

The way Darina contributes to her community is through a traditional job: sewing. She started with an embroidery course, bought a sewing machine and started working to build her own business. After several years, she opened her workshop. "My workshop is my life, and my work is my heart," she says.

At the IDB, we are working to promote diversity in our operations and within our organization. We are developing a Diversity Action Plan, aimed at promoting the inclusion of the LGBT + population, people with disabilities, people of African descent and of indigenous peoples, to be launched in 2019. Within the IDB, we established a policy for the protection of LGBT + people in recognition of the enormous value that a greater sexual and gender diversity brings to an organization, just as Juchitán, in Oaxaca, does with the muxe community.

Because for Darina or Biiniza, their gender identity is not optional; It is a fundamental part of who they are: "If they gave me the opportunity to be born again and choose between being born a woman or muxe, I would choose to be a muxe. Because I am happy as I am, always," says Darina.