Skip to main content
Caring for people: an opportunity for economic growth

Caring for people: an opportunity for economic growth

Some people have a noticeable fear of growing old. That condition has a name: gerascophobia. Others engage in discriminatory attitudes against older adults, a behavior called ageism. The WHO states that discrimination against older people is widespread throughout the world. It is a striking impulse to escape something natural and inherent to the human condition: aging. Paradoxically, this demographic trend also presents a unique opportunity for economic development in Latin America and the Caribbean.

With age, the chances of becoming dependent on others and needing long-term care increases; that is, of needing help to carry out daily activities such as feeding or bathing. In Latin America and the Caribbean, 8 million people were in this situation in 2015. By 2030, 27 million people and their families will drive the demand for elderly care services, having to face routine changes with formal and informal caregivers, home care or nursing homes. 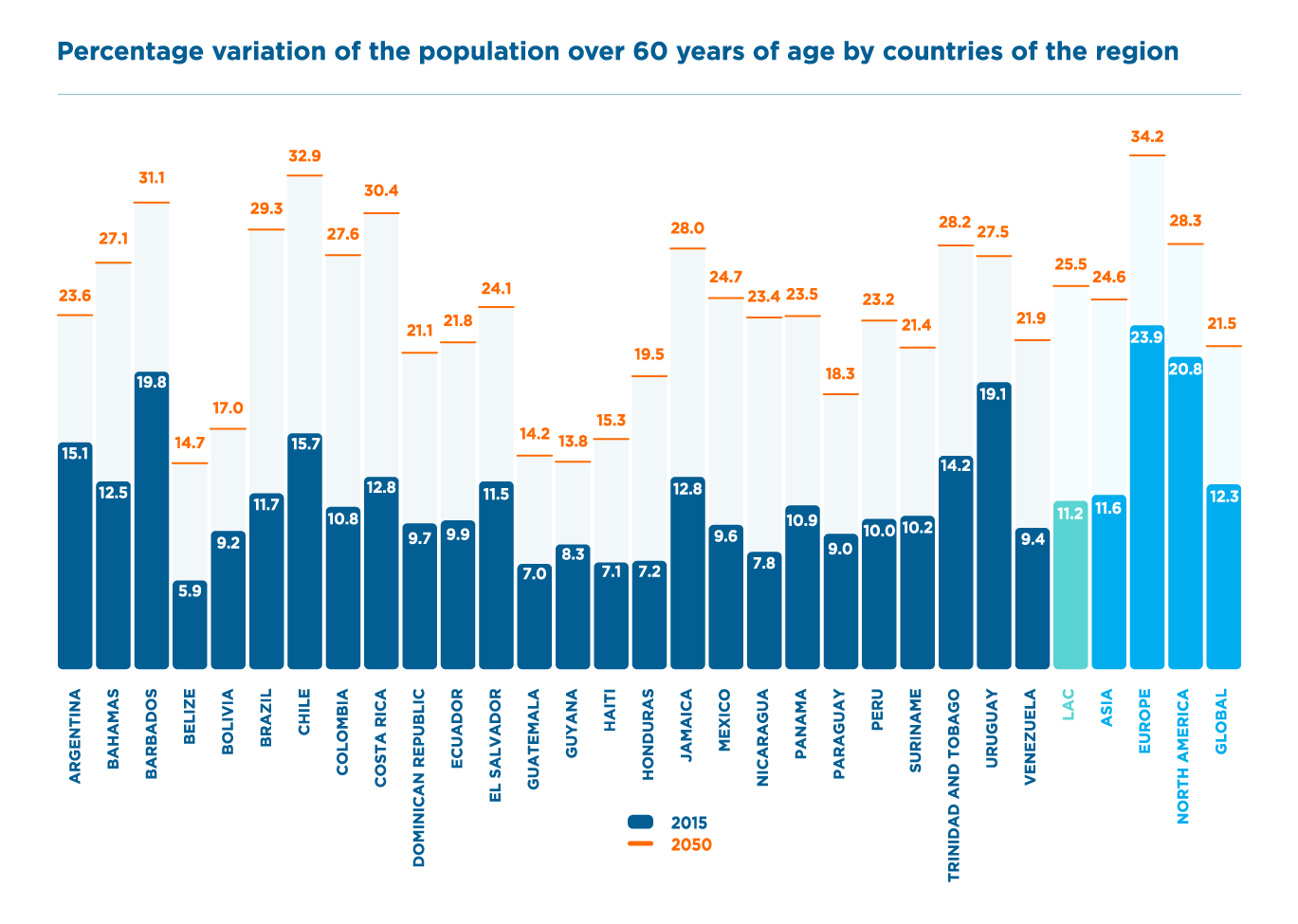 In the coming years, the region will face the challenging scenario of increased demand for care services, added to a reduction in their supply, which is based mainly on informal work performed by women. But this challenge is also entails an opportunity to provide such services, while promoting economic development and job creation.

Older adults caring for each other

Mario is an 89-year-old widower living in Costa Rica He had two children but both predeceased him. Like most older people, Mario would prefer to remain in his home, maintaining his autonomy, his belongings, his schedules and the comfort of his own place. His grandchildren and his daughter-in-law Norma, 65, work full time and live 40 km away. Every Sunday, around the family table, the same question comes up: who can support Mario in his daily life?

Numerous caregivers have passed through his house, most of them informal. Poor working conditions make turnover high. And every time a caregiver leaves, the difficult search for a suitable replacement resumes.

Norma wonders what will happen the day she needs assistance herself. The Panorama of Aging and Long-Term Care team of the Inter-American Development Bank (IDB) developed a calculator to answer the question of how likely we are to become dependent on our old age. By entering certain basic health data you can estimate the probability of needing long-term care in the future. For example, considering Norma's age, weight, height, and health conditions, the calculator estimates that she has a 28% chance of needing support. Some of the variables that play a role are hypertension, high blood sugar levels, and smoking.

The cases of Mario and Norma illustrate the need for countries to move towards systems that provide support to people who need long-term care. The IDB is supporting Costa Rica  in the design of a long-term care system, as well as a series of studies on aging and long-term care services.

Do you want to know who cares for the elderly in Latin America and the Caribbean? Find out in this link.

When someone needs support, life takes a 180-degree turn

Delia is 55, and until a couple of years ago she lived in Montevideo, Uruguay, one of the countries where people live the longest in Latin America and the Caribbean. Her parents, both octogenarians, are part of the 24% of Uruguayans of that age range who face difficulties in carrying out basic tasks of daily life. When the need for support became apparent, Delia decided to move in with them in their hometown of Tacuarembó. Since then, Delia's life took a 180-degree turn. Suddenly her routine began to revolve exclusively around cleaning, cooking, and assisting her parents full time.

Delia not only longed for free time, she also began to have medical problems herself. Her back began to suffer from the incessant chores. But taking two hours to go see a specialist was impossible, because she could not leave her parents alone.

In 2015 Uruguay became the first country in the region to design a comprehensive care system (SNIC, in Spanish) to meet the changing needs of its aging population. Among the benefits of the system are subsidies for hiring personal and telecare assistants, as well as the development of new day care centers for the elderly. Delia benefited from the first of these services and was able to count on the help of two personal assistants who made it possible for her to resume some of her own activities and take care of her ailments.

Like Delia, millions of women in the region take care of family members, a commitment that puts their autonomy and financial situation at risk, since they often have to stop working or reduce their working hours.

Do you want to know why aging has an important gender component? You can delve into this data by clicking here.

The opportunity presented by the “silver economy”

Nirley started working as a babysitter when she was 20. For her, providing care came naturally, it was something that happened between family, friends and neighbors. Thanks to a program from the Comprehensive Care System, she was able to train as a formal caregiver. The training course helped Nirley professionalize her services. “Taking a course gives value to one’s work, but also makes the work recognized as such. Learning always helps,” she says.

The professionalization of services is an opportunity to boost employment. In the words of Marco Stampini, a health specialist at the IDB and one of the authors of the book The Silver Economy: “It is essential that both countries and the private sector understand that the demographic challenge of an aging population implies opportunities for economic development and generation of job opportunities and new ventures.” He adds that when older people are in good health, they can be more productive, consume more and contribute to the economy. According to the McKinsey Global Institute, by 2030 people over 60 will drive 30% of consumption growth. 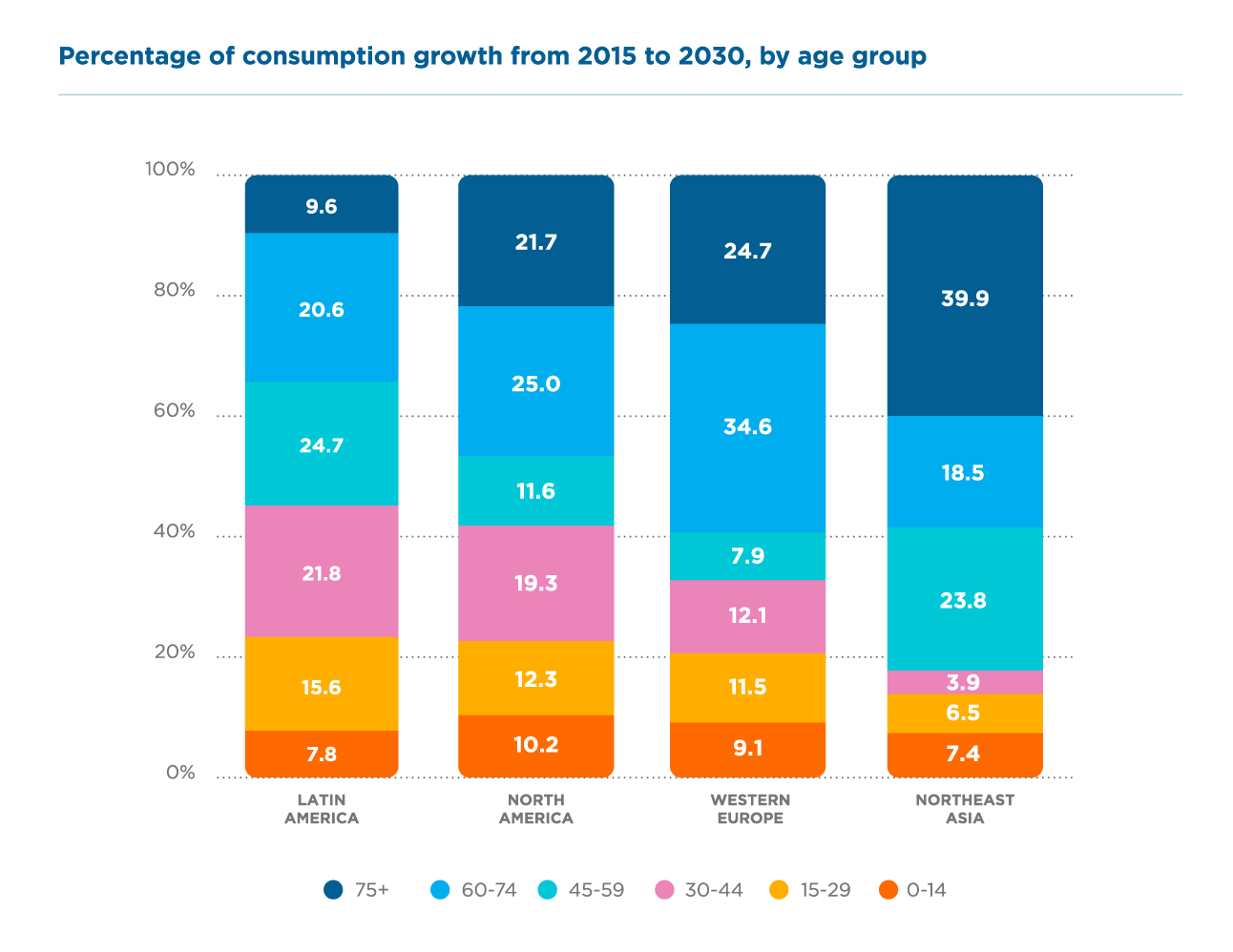 If more people like Nirley access training courses, three challenges are solved at the same time. On one hand, the supply of caregivers grows. Second, quality jobs are created. And third, a type of job that will be l fundamental for the region will be further professionalized and valued.

If you want to read more about human resources in long-term care, you can click here.

The benefits of having national long-term care systems are evident. Those who need support benefit from a market that offers quality services through professionalized human resources. Those who provide informal support, especially women, will be able to benefit from a fairer distribution of household tasks, and from being able to access the labor market. Meanwhile, formal workers benefit by professionalizing the sector and establishing clear rules. Among all these benefits, there is also good news for governments: the system can start small and scale up towards the kind of care that people deserve.

To learn more about building a long-term care system, download our flagship publication.

To learn more about the care of the elderly, visit the Panorama of Aging and Long-Term Care.

Do you want to know case studies by country? Download our free publications