25 Years of Struggle for Gender Equality

“In my life there is a before and after Beijing,” says Solana Quesada, director of the Gender Equality Advisory Office of the Municipal Government of Montevideo, Uruguay, recalling her participation in the Fourth World Conference of Women. A milestone that allowed the creation of the first platform of action to achieve gender equality, still in force 25 years later.

About 30,000 women from 185 countries participated in the discussions in Beijing. Among them were Solana and Lydia Alpizar, current Co-Executive Director of the Mesoamerican Initiative for Human Rights Defenders. The two were part of a delegation of 24 young Latin American and Caribbean women taken to the Conference by the Inter-American Development Bank (IDB), to ensure the representation of the new generation of women in the region who were working to achieve gender equality.

“It was a very important space to understand the reality of women in different parts of the world. It allowed us to reach a global agreement that served as a framework for public policies,” explains Lydia.

Gabriela Vega was in charge of the delegation, backed by years of experience in the Gender and Diversity division of the IDB. For her, the participation of young women was the best way to ensure a sustainable and lasting progress, bringing a new generation to the fore on gender issues. With 25 years of perspective, Lydia measures how far the change has come: “Today, young women are a benchmark of struggle, creativity and innovation. They demonstrate in myriad ways the power of their participation and the urgency of their demands.”

Beijing left goals to be reached and future leaders. But the magnitude of the challenge continues and each era brings its own challenges.

In the 1990s, guaranteeing universal access to education was a priority. Today, enrollment and basic education assistance rates are similar for boys and girls. Over time, however, the gaps start to increase, as access to the same opportunities becomes growingly disparate.

In addition, new challenges have emerged, such as the gender gap in mathematics, which grows year by year during the student’s life. This is the main reason for the low presence of women pursuing careers in Science, Technology, Engineering and Mathematics (STEM), which are better paid in the labor market.

To reverse the situation, the IDB conducts research to understand how to promote and maintain the interest of girls in mathematics, and collaborates with the Sesame Workshop program on The Great Explorers campaign, which seeks to stimulate the sense of Girls' belonging in math and science.

Women's access to the labor market has been and continues to be another fundamental issue, long made difficult because, in some countries, employment had to be authorized by the man in charge of the house, in addition to an incipient struggle for wage equity. Today, the wage gap persists and, although female labor participation has increased in the region, it is still 25 percentage points below that of men. 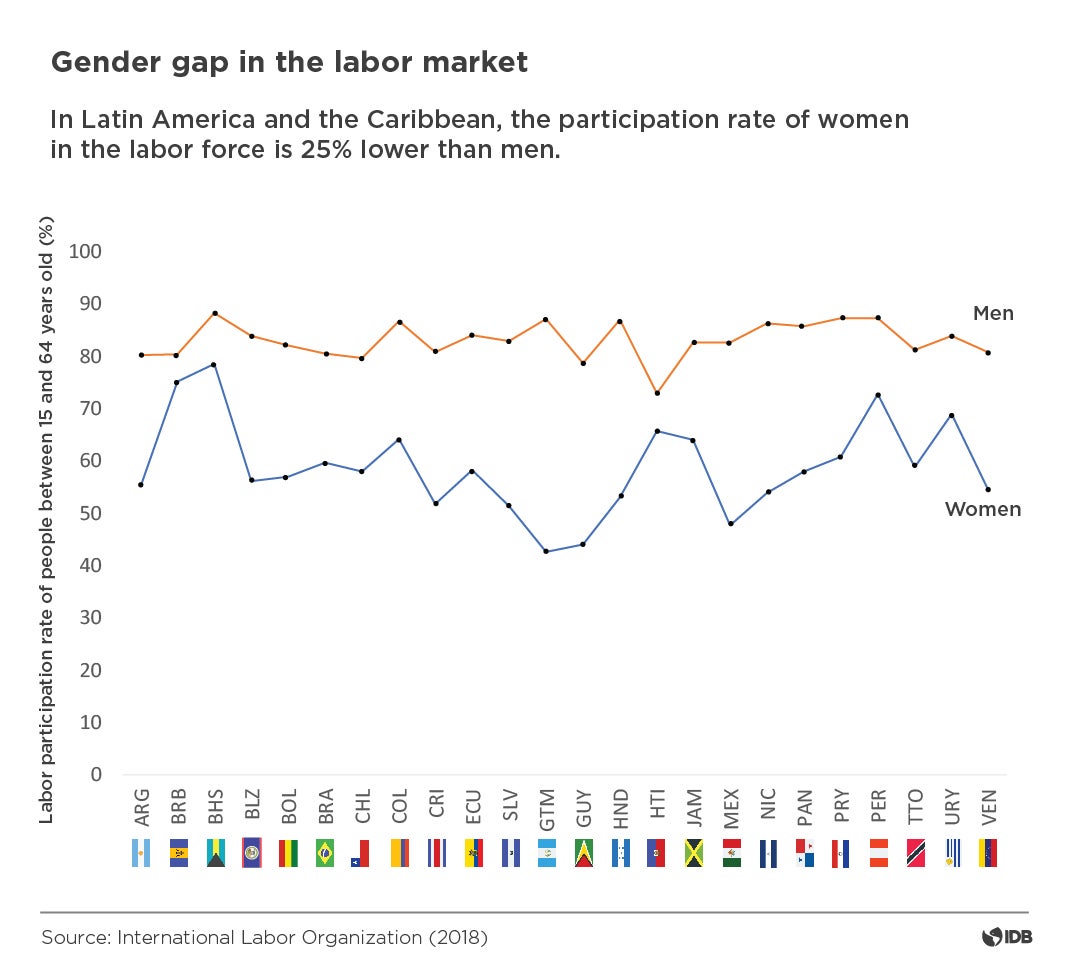 The IDB promotes Gender Parity Initiatives that focus on increasing women's labor participation, reducing the gender pay gap and strengthening women's leadership, both in the public and private sectors. By giving visibility to these issues, the Initiatives also allow other policies that may promote female labor participation, such as parental leave or child care services, to be added to the public debate. These types of initiatives have already been implemented in countries such as Chile, Argentina, Panama, Colombia, Costa Rica and the Dominican Republic.

And although there are still many challenges, “the labor market is one of the areas where significant progress has been made at a quantitative and qualitative level,” says Lydia. Continuing to close the gap implies preparing women for new challenges, such as the future of work.

Violence against women: a growing threat

Another issue on the Beijing agenda was violence against women and the goal of reducing it considerably. “In the 90's we felt it was a time of great hope and opportunities, where many things were possible. We never imagined that so many women would be killed everyday or that we were still going to have to be fighting these struggles today,” says Lydia, who with more than 20 years of work on gender issues dedicates her days to protecting at-risk activists in Latin America.

More than two decades later, the statistics on violence continue to rise. In Latin America and the Caribbean, one in three women, of all socioeconomic levels, has been a victim of violence, impacting on their psychological, sexual and reproductive health at all stages of their lives. 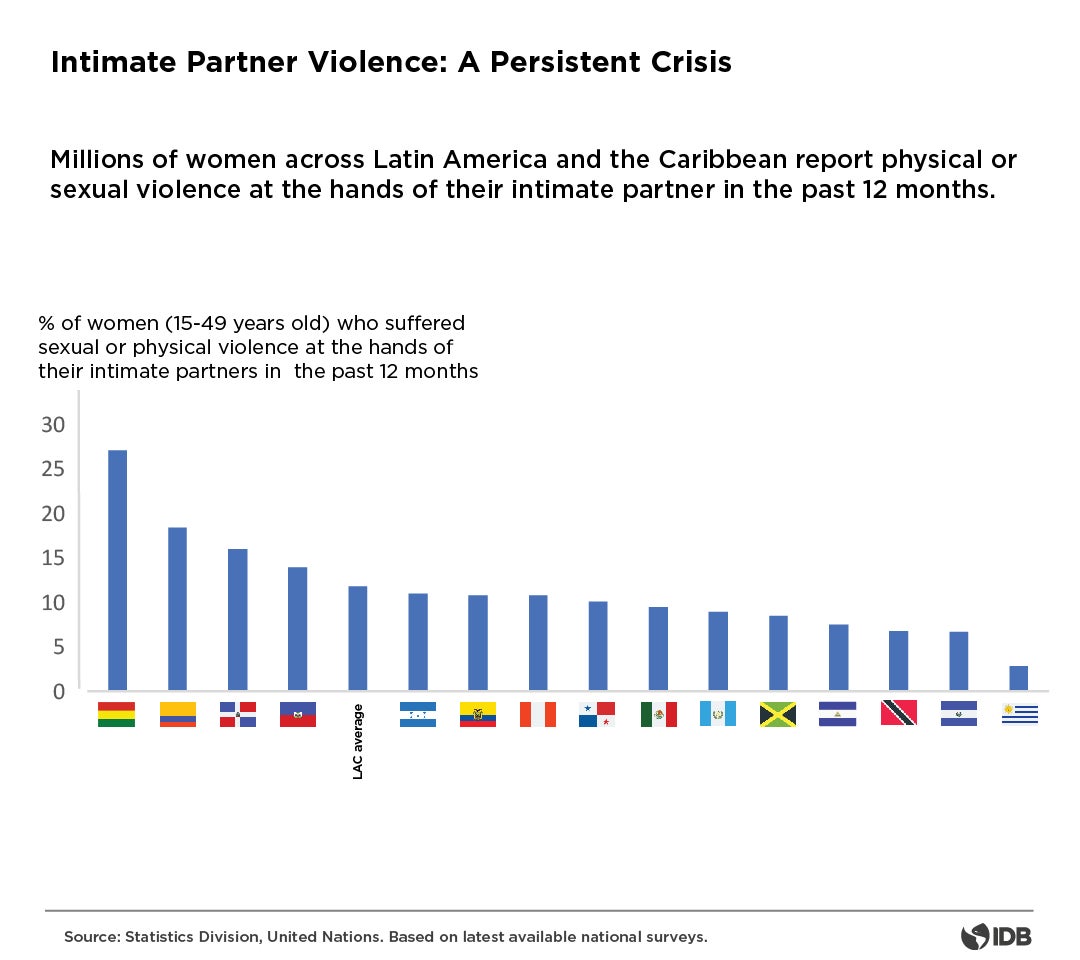 One of the bets that the IDB has made to support survivors and give them tools are the  Integrated Services for Women’s Empowerment Program (SIEM for its initials in Spanish) projects. This model integrates different public services in a physical space to address sexual and reproductive health, economic empowerment, prevention and attention to violence against women, and education about their rights.

In addition to this, the challenge of re-educating those who have grown up in domestic violence is still present, to prevent it from continuing to replicate. “It is necessary to deactivate what to some children may seem normal behavior. Gender equality education is essential for this,” Gabriela explains.

Fighting Inequality at Every Stage

Many gaps persist, while others begin to gain relevance. For example, a universal non-contributory pension, which ensures the solvency of women who have assumed unpaid domestic work, is an issue that was not yet a part of the debate 25 years ago.

“Gender equality is not only a fundamental human right, but a requirement to accelerate the social welfare and economic development of the region. Achieving the full participation of women in the different political, social and labor spheres must be a priority in the public policy agenda and a responsibility of the men and women of the region,” explains Caridad Araujo, head of the Division of Gender and Diversity at the IDB. Thus, the growth of female labor income in the region, between 2000 and 2010, represented 28% of the reduction of inequality and 30% of the reduction of extreme poverty, according to World Bank studies.

Achieving gender equality and the commitments made in Beijing will depend on coordinated efforts of governments, the private sector, civil society and the men and women of the region. “There is nothing that women have won that is not the result of our struggle. I would expect that in 25 more years we can continue to strengthen the organizational processes to guarantee equality,” says Lydia.

Read the commitments made in Beijing 25 years ago (in Spanish): Fulfulling Our Beijing Commitments: Progress From the IDB