The Plan of the Alliance for Prosperity has been developed by El Salvador, Guatemala and Honduras to address the structural causes of irregular migration through the generation of economic opportunities and the improvement of citizens’ quality of life.

The Plan seeks to create the conditions to enable the productive sector to offer high quality job opportunities.

The lack of opportunities for social and economic development faced by a large part of the populations of El Salvador, Guatemala and Honduras (known as the Northern Triangle of Central America), as well as the challenges in the field of citizen security, have fueled high levels of irregular migration – particularly toward the United States. At the end of 2014, close to 70,000 unaccompanied minors from the three Central American countries and Mexico were apprehended at the southwest border by the U.S. Border Patrol. 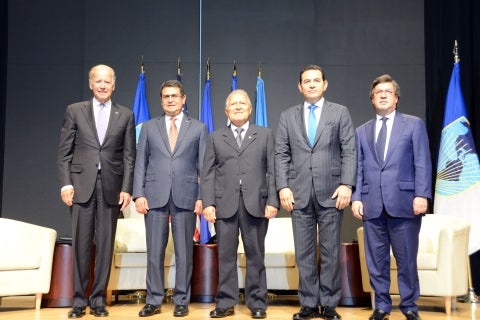 In order to address the problem of irregular migration and create the development conditions necessary to root their populations, the presidents of the three countries agreed to design a joint strategy. Thus, they established the Plan of the Alliance for Prosperity in the Northern Triangle, as a joint structural solution to address the economic, social and institutional roots of the crisis.

The Plan of the Alliance for Prosperity was designed by the three Central American countries, with the technical and financial support of the U.S. Government and the Inter-American Development Bank (IDB). The actions implemented under the Plan’s framework seek to foster the productive sector to create new economic opportunities, promote measures to develop human capital, improve citizen security and access to justice and strengthen institutions to increase the trust of citizens in the government.