Improving lives, bringing long-term economic growth and reducing poverty and inequality in Latin America and the Caribbean depend on development that is both socially inclusive and environmentally sustainable. Recognizing this, at the IDB we are committed to maximizing the positive environmental and social outcomes of our work while minimizing the risks and negative impacts to people and natural capital. In practice this meansprotecting and investing in our natural and social resources, responding to the challenges of climate change, promoting sustainable infrastructure solutions, and ensuring social inclusion and accountability. We work with the countries of the Region to achieve these outcomes through sectoral programs, loans and grants tailored to local contexts, and by applying a comprehensive set of safeguard policies to the projects we finance. We believe that projects grounded in environmental and social sustainability are better projects.

Our region is particularly vulnerable to climate change, with an estimated annual cost by 2050 of US$100 billion, or 2.2 percent of the region’s gross domestic product.

Latin America and the Caribbean is especially exposed to the observed and projected effects of climate change because of its geographic location, its distribution of population and infrastructure, and its reliance on fragile natural resources for economic activities and livelihoods.

Climate change is affecting “business as usual,” posing a challenge, but it also gives us an opportunity to innovate. Whether the outcome is to encourage more people to take action through community engagement or to increase a country’s energy security by diversifying the energy matrix, innovation serves as a positive force for change.

Recognizing this need, the IDB contributes to the region in the form of loans, grants, technical support, and knowledge creation. Read more in our blog.

Infrastructure is widely recognized as a key pillar of development. Infrastructure that is properly built and administered leads to more economic growth, higher productivity, and greater competitiveness. At the same time, infrastructure is essential for improving the quality of life of citizens and the inclusiveness of societies.

As the population and the economies in the region grow, demands for adequate, high-quality, and climate-friendly infrastructure increase. But the infrastructure and services provided need to respond to many challenges: rapid urbanization; limited access to basic water, electricity, and sanitation services; regional and global integration; natural disasters; and the need to address climate change adaptation and mitigation.

In other words, the region needs infrastructure solutions that ensure sustainability in the most comprehensive sense—not only addressing environmental concerns but also taking into account social and fiscal considerations.

The IDB demonstrates a strong commitment to sustainability through its environmental and social safeguard policies, standards, and guidelines. Each policy promotes sustainability through a two-pronged approach. It enhances outcomes by mainstreaming environmental and social concerns, an approach that promotes environmental and social aspects as central considerations for all project activities. And it minimizes negative impacts by applying safeguards, including identification, monitoring, and mitigation of issues throughout a project’s lifecycle. These policies, which we model after international best practices, are essential to our mission of reducing poverty and inequality in Latin America and the Caribbean.

Specialists in our safeguards unit work closely with project stakeholders and Bank colleagues to identify and solve challenges that may arise during Bank projects and programs, including environmental issues, inclusion of indigenous peoples, resettlement, labor, gender equality, and health and safety concerns. Thoughtful application of safeguard policies, standards, and guidelines ensures that project beneficiaries can thrive for the long term. Read more in our blog.

Latin America and the Caribbean is the second most urbanized region on the planet, after Europe. It has gone from a 64 percent urbanization rate in 1980 to 80 percent in 2014. If this growth trend continues, approximately 90 percent of the region’s population will be living in cities by 2050. This rapid pace of urbanization creates daunting challenges for municipalities and shapes their ability to effectively manage their citizens’ quality of life. In addition, climate change poses an unprecedented challenge to our cities, many of which are located in coastal areas—vulnerable to hurricanes, flooding, and other natural disasters.

Recognizing these challenges, in 2011 the IDB launched a special program called the Emerging and Sustainable Cities Initiative (ESCI), which is currently working in 40 intermediate urban centers (those with populations of 100,000 to 2 million) in the region, promoting urban sustainability in three main areas—urban infrastructure and services, environmental sustainability, and fiscal sustainability— through the provision of loans, technical assistance, and grants.

The program has helped consolidate a regional network of cities—local governments, private institutions, universities, and citizen organizations—by developing a broad communications platform and convening key actors in workshops, forums, and international events. This has created a space for dialogue and the exchange of best practices, as well as helped mainstream climate change mitigation and adaptation into the sustainable development agenda. Read more in our blog.

As the region grows economically, it faces new challenges related to balancing increasing demand for resources with the need to protect and manage natural resources within the context of a changing climate. Critical in this context is the understanding that sustainable land and forest management can contribute to mitigating climate change while at the same time improving the livelihoods of rural populations, particularly indigenous groups and ethnic minorities. It is also important to recognize the region’s natural capital as a unique competitive advantage that, when combined with its human capital, holds promise for sustained growth and social equality.

We are involved in activities that improve the management of protected areas, strengthen environmental institutions, generate income opportunities for communities in a way that helps them sustain their neighboring ecosystems, manage coastal and marine resources, and support climate change and disaster risk management initiatives in critical watersheds.

The Bank’s Biodiversity and Ecosystems Services Program, “BIO,” integrates biodiversity and ecosystem into decision making by attributing a value to it. Ecosystems—like forests, savannahs, and coastal watersheds—provide crucial services that benefit people, such as recreation, clean water and air, and the prevention of soil erosion. Healthy ecosystems and the biodiversity that they support are the foundation from which future services flow to our communities and economies. By valuing and quantifying them, these ecosystem services become visible in their economic dimension as important input for communities and infrastructure. Thus they become part of the investment calculation in key economic sectors in both public and private sector operations. Read more in our blog.

Despite important social and economic gains, large gaps remain between women, indigenous peoples, Afro-descendants, and the rest of society in Latin America and the Caribbean.

Closing the gaps between African descendants, indigenous peoples, and others in the population is also a key challenge. In the case ofAfrican descendants,the ongoing exclusion from the economic and cultural lives has an impact on democratic governance, citizen security, and the ability of several subregions to meet strategic development targets. In regards toindigenous peoples, it is necessary to create the conditions for them to thrive and grow in harmony with their surroundings by capitalizing on the potential of their cultural, natural, and social assets. Read more in our blog.

THE IDB MODERNIZED ITS ENVIRONMENTAL AND SOCIAL POLICIES

OUR FRAMEWORK FOR SUSTAINABILITY

The IDB’s Sustainability Framework stems from its charter and funding mandate to reduce poverty and inequality and to achieve sustainable growth among its borrowing member countries in Latin America and the Caribbean. To meet these mandates, we have put in place strategies and priorities to guide our support and lending portfolio, along with a robust safeguards system. In addition, the Bank tracks measurable results, adherence to lending targets, and the effectiveness of its safeguards. We also emphasize knowledge and capacity building—essential components to ensure sustainability. 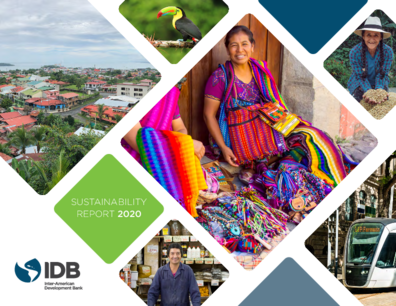 Sustainability is a core element of the IDBs work. Long-term economic growth, and the reduction of poverty and inequality in Latin America and the Caribbean depend on development that is economically, financially, environmentally, socially, and institutionally sustainable.